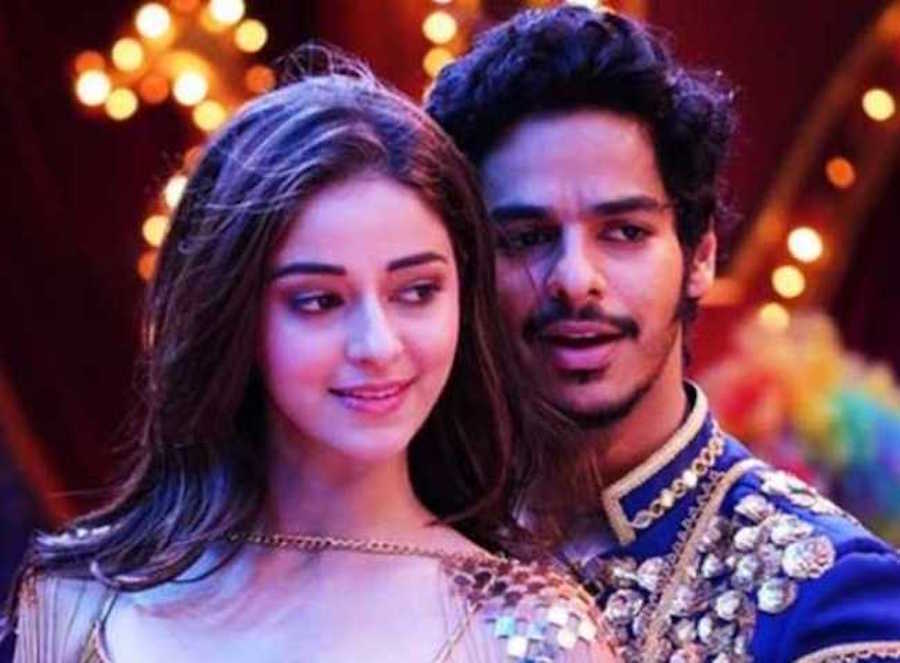 Bollywood. We’re confused. We’re angry. And yet, we’re not surprised.

Despite serious discussions and backlash over colorism and the Black Lives Matter movement finally getting the global recognition it deserves, Bollywood still decides to soldier on with its regressive, old way of thinking with a new song from the upcoming “Khaali Peeli.” The song, “Beyoncé Sharma Jayegi,” features the two leads, Ananya Pandey and Ishaan Khatter, dancing and lip-synching to lyrics that roughly translate to “when you shake your hips goriya, Beyoncé will be embarrassed/bashful.”

The song had been disliked more than 1 million times on YouTube, and Twitter users, comments, etc. have posted thousands of negative comments and outrage over the lyrics, as the term goriya connotes the idea of a light-skinned woman (even if some dissenters say that’s not what the song’s lyricist(s) meant).

The team behind “Khaali Peeli” responded to the backlash first by changing Queen Bey’s name to “BeyonSe Sharma Jayegi” (ridiculous), and now by changing the lyrics of the song completely to “tera dekh ke nakhra, ye duniya sharma jaayegi” and taking down the old version of the song on YouTube.

The lyric changes are a better response than doing nothing (and definitely better than their first attempt at fixing the issue), but the problem lies where these filmmakers and music directors even thought making this song was a good idea in the first place. Naturally, we at Brown Girl Magazine have a lot of thoughts about the song’s original lyrics and its existence as a whole. The entire industry of Bollywood (not just the “Khaali Peeli” team) should listen to us and the whole world because frankly, the time for making these mistakes is so far past over.

“As a music journalist and artist manager, tracks cross at least 5-10 people prior to being released, my question is not to the cast, it’s to the lyrical team and studio, how could you release something like ‘Beyoncé Sharma Jayegi?’ Where is your publicist? This is a clear example of Bollywood’s inability to improve and apathy because they feel largely unscathed. The best way to make a difference is stop giving the song views and plays, don’t stream it, don’t click it, alternatively there’s incredible indie music coming out of India that will change the world without promoting colorism and ignorance.”

“What in the racist is this?!

The disrespect! The disregard, the utter audacity to write, sing, choreograph, shoot, and then promote THIS song during a global anti-racism movement…and then to double-down and say it isn’t what it clearly is?! The lyrics in question roughly translate to “when you shake your hips goriya (white girl/white-skinned girl), Beyoncé will be embarrassed/bashful.” The essence is that Beyoncé would blush or be put to shame by this white girl’s dance moves?

This song? Now? Just months after ‘progressive’ Bollywood celebs declared their support for the global Black Lives Matter movement, they chose this moment to take the time during a global anti-racism watershed moment for THIS song?

beyoncé honey , we are so sorry ? pic.twitter.com/abS5MShFth

This pile of racist and colorist garbage pushed out to people in a country plagued by colorism and with rampant systemic oppression, in the midst of a damn global pandemic, which, by the why, horribly impacted the most vulnerable populations in India?!

To then insist that the lyrics can’t possibly be racist because ‘goriya’ has always ‘traditionally’ been used in Bollywood music to mean ‘girl’ is the stupidest thing I’ve ever heard. ‘Goriya’ has always meant ‘white girl/white skinned girl” and we all know it. The problem is that we’ve “traditionally” correlated being beautiful with being white-skinned/light-skinned so much so that the word is now a synonym for beautiful girl.

How Maqbool, and his lyricist extraordinaire Kumaar, didn’t understand that words matter, context matters is beyond me. Just because Bollywood tropes have “traditionally” upheld and perpetuated oppressive cultural practices like colorism, racism and other oppressive traditions, including NEPOTISM (a byproduct of the caste system and one of the biggest talking points across India this summer!) doesn’t mean they get a pass or can plead no ill will when they keep doing it.

Then they went and made it worse by not reading the damn room when they wrote this piss poor attempt at explanation/apology.

We have an anti-Black racism problem, my fellow South Asians. This latest Bollywood blunder makes it evident on a larger scale. I will say that level of backlash against this song is definitely hopeful though. It means that some of us are working to action our commitment to be anti-racist. But there’s a lot of us. Please talk to your peeps!

One final note, even if they hadn’t used ‘goriya,’ AS IF Beyoncé’s prowess in all things entertainment could ever be compared to anyone! I am not being facetious, one need only to glance at her accomplishments to recognize that she is peerless. To position the mediocrity of Ananya Pandey as a dancer(!) in the same breath as the GOAT?! Is inherently racist in and of itself…my goodness, I can’t.

The Queen has her name trademarked and I hope she sues them. Though I guess they’ve discovered this little factoid as well and that’s why they’ve chosen to change the spelling of Beyoncé’s name?!

Yup, you read this right, instead of changing the word ‘goriya’ to anything else (‘kudiye’ — ‘girl’ in Punjabi; or ‘soniye’ — ‘beautiful girl’ in Punjabi…because they use Punjabi, oftentimes incorrectly too, whenever it suits them!), they’ve instead decided to double up on the racism by trying to profit off a Black woman’s excellence by changing Beyoncé to BeyonSe as a way to avoid potential legal troubles!

What a sad sad attempt. By doing this they’re proving that they wanted to cash in on Beyonce’s name, and never really cared about the racism.”

“I am loathe to give this song and everyone involved in it any more attention, but it’s clear that ‘Beyoncé Sharma Jayegi’ is just a sparkling display case of everything wrong with modern Bollywood. In context, the lyrics actually suggest that the heroine’s dance moves are what will embarrass Beyoncé, not her skin color (which is also deeply insulting — I hope that Beyoncé never has to watch Ananya Pandey dance because she will certainly be embarrassed, albeit for different reasons than the song suggests).

But the problem here is that errant ‘goriya’ in the lyrics, which unnecessarily calls attention to Pandey’s fair skin in the middle of everything, and is presented — as it always is in Bollywood and Indian culture — as a compliment. ‘Goriya’ is presented as the lyrical equivalent of ‘baby,’ but it’s not like Hindi doesn’t have alternatives that have nothing to do with skin color. BG Jashima pointed out that ‘balliya’ or ‘soniya’ would’ve worked just fine and not made us all want to rip out our hair over just how little this industry cares about its audience and the psychological damage it’s actively inflicting on Indian women of all ages, one errant lyric at a time.”

“In ‘How To Get Away With Murder’ — which is essentially what the Indian wannabe-secular-democracy-but-actually-Hindutva-supremacist-nation-state has unabashedly become — Viola Davis’ character tells her adversaries: ‘You’ve messed with the wrong b*tch.’

That line describes exactly what these Bollywood losers have done with the release of ‘Beyoncé Sharma Jayegi.’ And I don’t mean ‘losers’ in the uncool sense (although they are undoubtedly uncool) I mean, I’m sorry, but WHO is Ananya Pandey, even?? I don’t know her, never heard of her, and I don’t even think she knows herself as she’s conveniently forgotten that she has melanin.

What I mean is ‘losers’ in terms of defeat. They messed with Beyoncé. In other words, in addition to messing with the ‘wrong b*tch,’ they’ve messed with the wrong witch. Beyoncé has told us this time and time again. She. Is. Supernatural. She channels the energy of O’Shun. She is sacred. She’s Divine. And she’s a rich witch. She rented the damn Louvre for a music video. And once the revolution reaches its peak, bullets will bounce off of her.

Considering how deeply mysticism runs through desi spiritualities, these losers have cursed themselves indefinitely. Their karma is now as trashy as they are. And I have no remorse. Beyoncé was Nice enough to scatter us fancy bread crumbs with her three-second inclusion of Sheerah Ravindren in ‘Black Is King‘ and THIS is how Bollywood accepts her invitation for Black and brown solidarity? Well, I’ll be damned.

And quite frankly, with Beyoncé’s voodoo witchcraft, quite frankly so will these people who messed with her — damned for eternity. All I can hope for is that every Black person who has the misfortune of exposing themselves to this horrid song, is quickly able to remember that this does not represent all of us.

Many desis are active allies who appreciate the beauty and power in Blackness and color. Many desis reject whiteness as the supreme norm. Because at this point, India is just making an embarrassing fool of itself over and over again. And I’m tired — this secondhand shame is exhausting.”

“Yet another glamorous ‘time pass’ song has been produced in Bollywood, but this time the ghoulish and grotesque lyrics crafted in this seemingly politically conscious era truly deserves the hardest of media smackdowns. I am taken aback when seemingly progressive and conscious movies like ‘Dear Zindagi’ or ‘Shakuntala Devi: Human Computer’ are made but are immediately followed (or preceded) by what can only be corrupt and hearsay media such as ‘Kabir Singh’ (absolute trash) and the song ‘Beyoncé Sharma Jayegi.’

Whoever thought to even compare Ananya Pandey and Beyoncé? Which songwriter laughed at himself (for we all know that the patriarch runs true) when he wrote those despicably incorrect words? Which buffoon let it be produced without even batting an eye at the conflicts that would arise by targeting the skin tone of one the most renowned artists of all time? And Ananya danced to this because she thought it was cool? The passiveness by each of these parties is no longer something that we can be silent about.

This is not an accident or a mishap. This was a concentrated effort of an error that stems from the patriarchy, sexism, and colorism that runs so deep in India that they don’t think about it twice as they dabble in their Fair and Lovely creams and shame women into feeling lesser than. The fact is that the color of a woman’s skin is her value — this societal let down and inherent colonialism is perpetuated constantly by media and the wealthy who benefit from this system of colorism and caste. The fact that skin color is something to pass judgement on creates a superior complex in those, like Ananya who wags her nonexistent hips, and loan behold: the cycle of passiveness and shame continues. Come on Bollywood, where are your standards? Where is your human decency and respect?”

It’s time for the industry to finally start learning from “Beyoncé Sharma Jayegi” and its many previous mistakes. Bollywood: your progressive upgrade is past due.