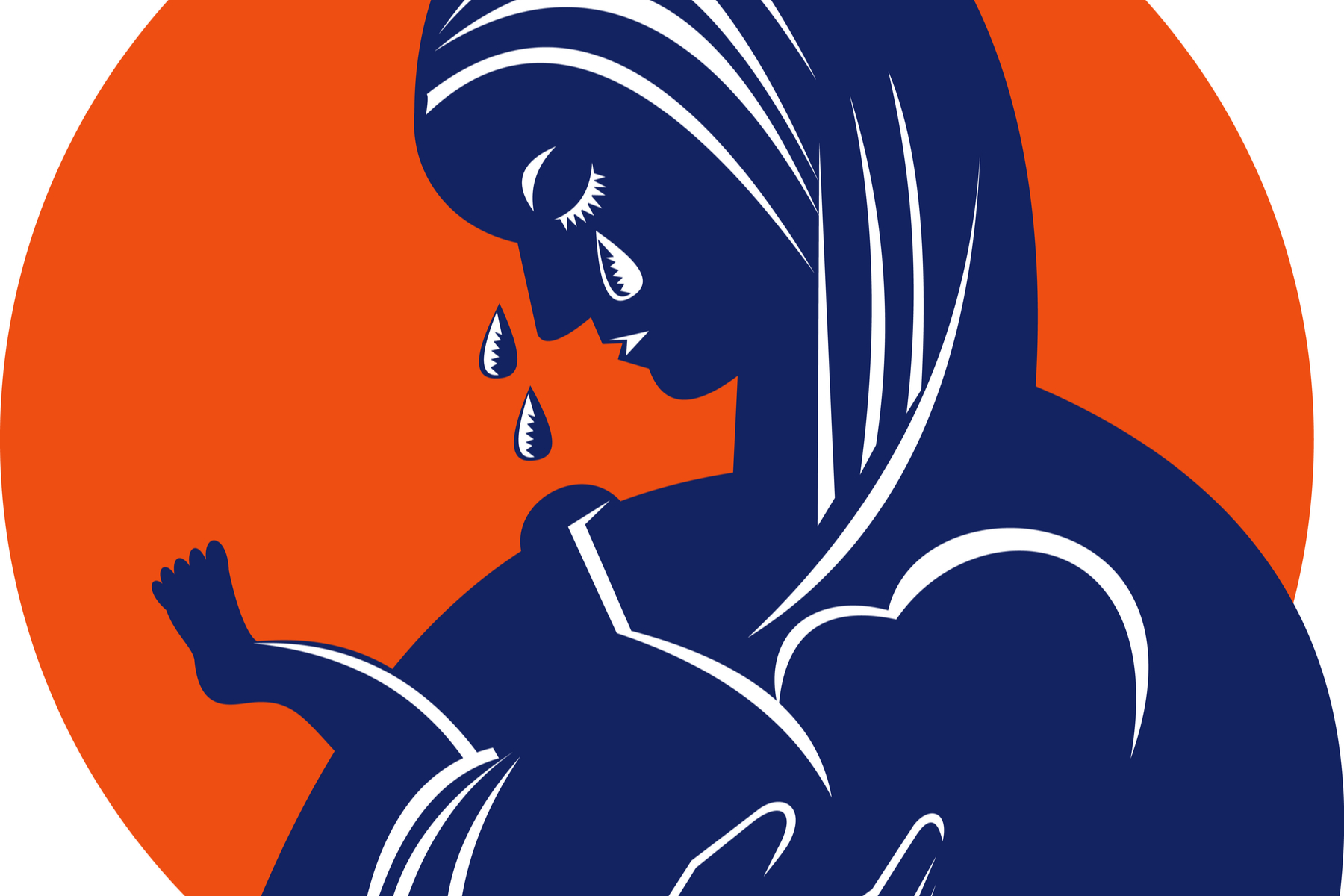 At the end of July, after months of battling postpartum depression (PPD), 31-year-old Nima Bhakta died by suicide. She left behind a devastated family and her seven-month-old baby, Keshav.

Nima’s struggle with PPD was real and it was serious. But Nima should not have died because of it.

Perinatal depression (which includes both prenatal and postpartum depression) is a condition that can happen to anyone regardless of age, race, culture or income level. The causes can range from changes in hormones during or right after pregnancy, life stress or because of a woman’s existing predisposition to depression.

And even though symptoms can be easy to miss and often go unnoticed (which mom-to-be or new mom isn’t overwhelmed with emotions or constantly tired?), perinatal depression is very much treatable.

Regardless of how or when it happens, perinatal depression is never because of something a woman did or did not do.

The Story of Nima Bhakta

When Nima Bhakta found out she was expecting, she was thrilled. After all, she was already known as a star maasi (aunt) to her sister Priya Bhakta’s children. So, happily, she shopped for baby clothes and scheduled a maternity photoshoot.

But, at the end of December 2019, when Nima gave birth to baby Keshav, everything changed.

“The change was immediate,” recalls sister Priya Bhakta. “The second her son was born she was different. Every mom struggles at first. The lack of sleep, the work a newborn requires – it’s a complete life change. But Nima, she was different after the baby.”

According to Priya, Nima would go from moments of high anxiety and uncontrolled worrying to moments of complete calm verging on an almost reckless apathy.

“I would be changing [Keshav’s] diaper and [Nima] would just be hovering over me. She would be adamant about which Aquaphor to use — the tube not the tub. She would panic because the baby was sleeping 8+ hours at night even though everyone told her it was okay. When [Keshav] would take naps, she would sit a few feet away just watching the baby monitor,” recalls Priya.

“She was just very obsessive over her son. We would try and reassure her and she would tell us ‘you don’t understand him, he doesn’t eat, he’s not gaining weight’ even though he was perfect.”

Other times, Nima would be completely unphased by her baby’s discomfort. Once, Priya recalls Nima telling her, “oh, he’s crying. And, I don’t care to pick him up.”

For months, it went like this. And, to be clear, Nima’s family did their best to get her help.

During one of Nima’s routine visits with her obstetrician, her husband made sure he was on speakerphone (because of COVID-19 restrictions, he couldn’t attend appointments with her). To her husband’s surprise, when the doctor asked Nima how she was feeling, Nima said she was fine. He had to stop the conversation and tell the doctor some of the things he’d found concerning.

“Nima would hide it,” says Priya. “She had this thought in her head that she had to be a perfect mom.”

This need to be perfect is something every generation of South Asian women is familiar with and can attest to. Even when we are marinating in hormones and cortisol, during or after our pregnancy, we are taught to soldier on.

“In desi culture, motherhood is [not only] an expectation, it’s a rite of passage,” explains Maliha Khan, a licensed therapist at The Menninger Clinic. “Women are expected to be able to handle motherhood. And if she finds the journey challenging, people ask what is wrong with her.”

This is something I experienced when last year, in my first trimester, I was diagnosed with perinatal depression.

Before my diagnosis, I hadn’t given much thought to perinatal depression. It was only when my mind, along with my body, felt stretched to the point of no return and when, one day, I found myself calling a national suicide hotline, that I realized how many women around me were suffering or had known this suffering.

That means, in a group of friends — should they all choose to become mothers — at least one will go on to struggle with the same condition that robbed Nima Bhakta of her life.

But, if perinatal depression is so common and so treatable, the question then becomes: why are women still dying because of it?

The experts I spoke to for this article point to the stigma that still exists in South Asian communities when it comes to discussing mental health.

“Perinatal depression, like other mental health conditions, is a touchy subject for South Asian families. Especially ones with a high degree of perfectionism,” says Khan.

“Desi families, for generations and generations, have idealized appearing perfect. That’s why conversations at desi family gatherings revolve around our social successes: how our child got into an ivy league school, or how we bought our dream home or the latest model Mercedes or found the perfect match for marriage,” Khan said.

Because of these unspoken social rules and societal expectations, it can take every ounce of a depressed person’s energy to finally ask for help, which is exactly what happened the day Nima completely broke down and called Priya for help.

“I told her ‘okay, you’ve got to get help. It’s okay to get help. You have our support, we love you, and everyone is going to help you,’” Priya recalls.

Nima agreed and together the sisters found a therapist who confirmed that Nima was suffering from PPD and had a lot of anxiety. Because of COVID-19 restrictions, the therapist recommended weekly phone sessions. But, because of the lack of an in-person connection, Priya thinks her sister did only one or two sessions.

In our post-pandemic world, therapy has moved online, prenatal appointments are solo affairs and all of us are living more isolated lives. This is why, according to Dr. Sue Varma, a New York-based board-certified psychiatrist, the need to screen for perinatal depression is greater than ever.

“The whole process [of how coronavirus is shaping the world] will shape a woman’s experience. Giving birth, for many women, can be a very vulnerable time in their lives. They are under a lot of pain [and now] they may not always be able to best advocate for themselves in the midst of a lot of quick change,” explains Dr. Varma.

Dr. Varma stresses that doctors do not hesitate to screen for suicide. She recommends that obstetricians have mental telehealth referrals lined up for patients, adding that for perinatal depression, “cognitive behavioral therapy can be very effective [as well as] medications, which, of course, are a very personal decision.”

Priya does not know if her sister Nima was ever screened for suicide. But, she can recall clearly how, in the months leading up to her death, Nima’s spark and her excitement for motherhood all but disappeared.

There were times when Priya caught a glimpse of the sister she had always known. The Nima who loved to dress up and take pictures. The Nima who loved boiled peanuts. But, after giving birth, Priya recalls how mostly Nima was no longer Nima. Instead, the new mom spent most of her days in sweatpants, sometimes even refusing to show Keshav to her family on FaceTime.

“She was perfect from the start,” Priya tells me. “She was organized, studious, a shy girl who got straight As.”

In the end, it was this societal demand for perfection that would escalate Nima’s undoing.

Despite having the support of her loved ones, in late July, Nima would decide she was done playing by Desi society’s rules. In a half-finished note on her phone, which her family found after her death, Nima leaves behind a haunting paragraph directed to her community.

“Society,” she writes. “Don’t blame my husband, my in-laws or my family. They are not responsible for anything. I felt the way I felt because of myself only. If you want to criticize the kind of person I was for abandoning Keshav, I am the only one to blame. Things happen that are out of people’s control. My mind needed to be at ease and this was the only way I felt it could. I wasn’t able to communicate to my friends, family, or anyone anymore and lost the ‘Nima’ everyone knew through social media, texts, and in-person. My appearance changed, my mind was troubled, I was wearing sweats every day, and never even went outside. Please let me go in peace.”

The Cult of Perfection Killing Us

Suicide is the leading cause of death for new moms.

Yet, in the desi community, we are so far from acknowledging maternal mental health, let alone tackling the topic of perinatal depression and how to stop young moms from dying because of it.

“Conversations surrounding the mental health of pregnant women should be the norm. Just like we value a healthy baby, a healthy mom should be a priority,” says Khan. “It’s crucial for the desi community to realize this so we don’t lose more amazing mothers to perinatal depression. When we are aware, we can do better.”

“South Asian culture is strongly collectivist and interdependent. There is this sense of not ‘airing your dirty laundry’ to strangers. Given the [large size] and the interdependence of our families, there is a fear of judgment or persecution from the community,” explains Dr. Lakshmin. “The unfortunate consequence is that women end up suffering in silence because getting help is viewed with suspicion and stigma.”

According to Dr. Varma, “there’s so much stigma, shame and a lack of proper language and acceptance around depression and anxiety in the South Asian community. There’s a pressure and an emphasis on getting married, having a family — sometimes at any cost.”

In a culture like this, suffering from perinatal depression feels a lot like standing on the deck of the Titanic yelling “Iceberg! Iceberg!” You’re shouting into the void, while, behind you, the band keeps playing and the party carries on.

So what is a woman to do if society or her loved ones are unable or simply unwilling to understand and help her?

“Don’t be afraid to go outside of your circle,” advises Dr. Lakshmin. “If your family isn’t able to understand you or is dismissing you, you need to find a tribe outside of them.”

Dr. Pooja Lakshmin encourages women to turn outside of their immediate circle, if necessary.

Reach out to school friends, colleagues or join mom groups — most of which, since the pandemic, have moved online — she advises. She also encourages women to visit www.womensmentalhealth.org to learn more about perinatal depression and, if they need a safe place to sound off, she invites women to join her non-judgmental online community on Facebook.

Dr. Lakshmin has also recently written an article for the New York Times on how to support a loved one suffering from perinatal depression.

Dr. Sue Varma appears monthly on Sirius Satellite’s Doctor Radio where she interacts with live callers and provides expert advice on a variety of psychiatric questions. Meanwhile, Maliha Khan, a licensed therapist based in Houston, Texas, runs an Instagram and YouTube platform (@MentalHealthWithMaliha) where she raises awareness of mental health illness in a way that is specifically geared to the South Asian community.

Maria Kari is a new mom, a lawyer and freelance journalist based in Houston, Texas. She has written for Teen Vogue, Glamour Magazine, Allure Magazine, NPR and HuffPo to name a few. She tweets @mariakari1414.