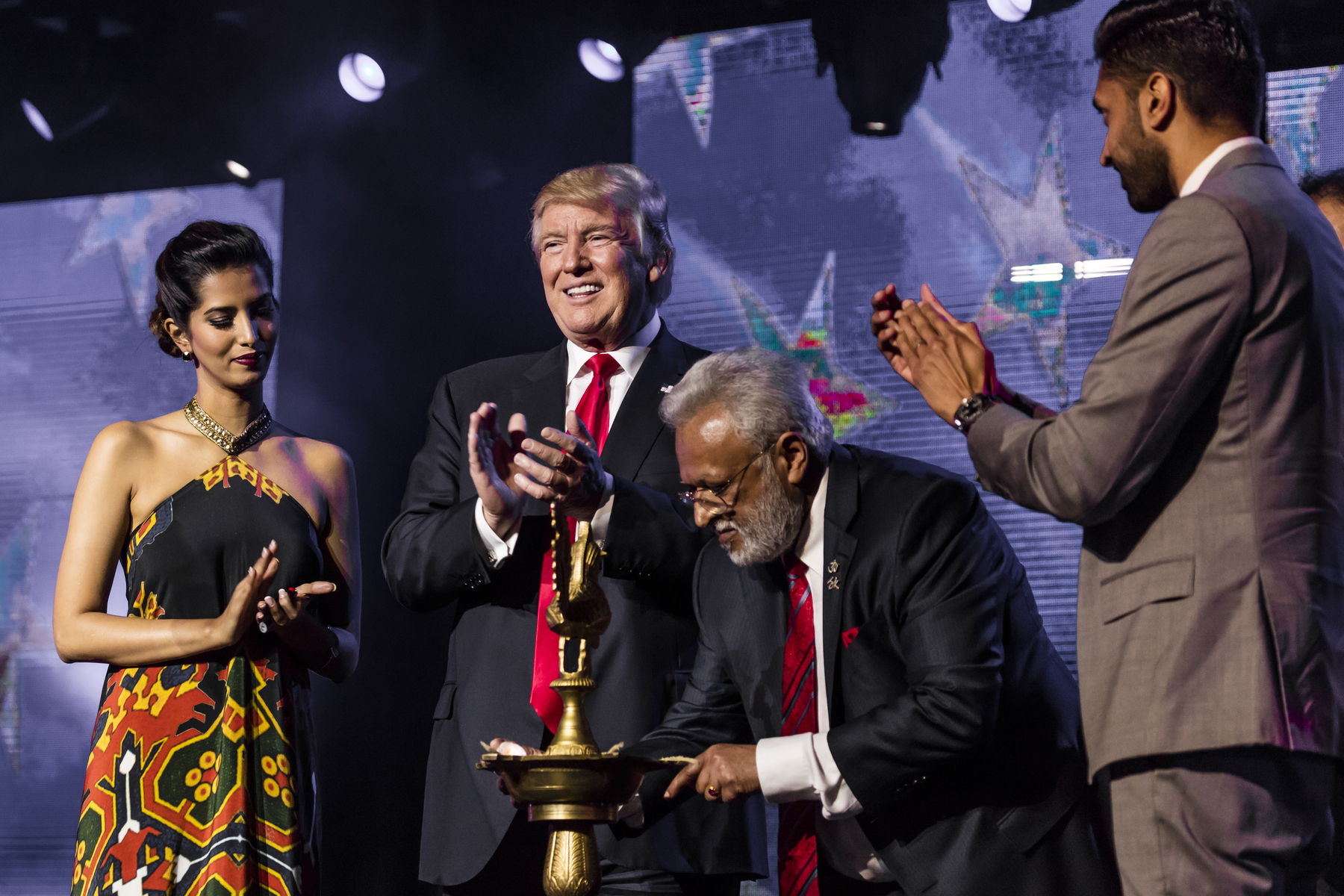 Election Day is just around the corner, and the level of engagement I’ve seen from the South Asian American community this time around is outstanding. Like many others, my Facebook and WhatsApp messages have been flooded with desi aunties and uncles announcing that they voted for Biden-Harris. My own mother, who has never been political in her 30 years of living in this country, helped send 10,000 postcards to undecided voters with her auntie friends.

Though this South Asian political awakening has given me hope, I must acknowledge the brown elephant in the room — so to speak. There appears to be a growing vocal minority of Indian-Americans who have already voted or plan to vote for Trump this election. When I mention the “Trump-supporting Indian Uncle,” a face may come to mind. Many of us can relate to seeing that one uncle — or auntie — on a family WhatsApp group or a family friend we’ve muted on Facebook. Their messages or posts typically check the following boxes: questionable sources, complete falsities, aggressive tone and loud images. They might include a reference to taxation, immigration, Islamophobia or India-U.S. relations. Though I was under the false impression that these uncles and aunties are a rarity, I soon learned that many of my Indian-American friends not only see these posts, but also have a parent who is posting them.

[Read Related: The Final Presidential Debate of 2020: Did it Help Undecided Voters?]

So where did these aunties and uncles come from, and what has spurred this recent shift? I may not have a complete picture, but I have a few hypotheses. The Indian-American diaspora is by no means monolithic, but I do see common threads among Indian immigrants. When I think of the Indian-American story, I think of my own parents’ immigrant story. They came to this country 30 years ago for high-skilled jobs, spent a decade navigating the immigration process and did well financially. Given their story, one could see how Indian-Americans who also share this story might choose to be “socially liberal and fiscally conservative” or how they might be allured to candidates who tout low taxes and tight immigration policies.

Additionally, the Democratic party has done a poor job of reaching South Asian voters. South Asians are often grouped with AAPI voters, who encompass immigrants from more than 35 countries. But it still doesn’t answer how an Indian-American voter could make such a dramatic leap. Wouldn’t “well-educated” uncles and aunties see past Trump’s utter lies or be horrified by his child separation policies, at the very least?

As I contemplated this puzzle a few weeks ago, my phone buzzed. I received a campaign email from Ritesh Tandon, a South Asian Republican congressional candidate running against incumbent Democratic Congressman Ro Khanna, who is also South Asian. The email reminded me eerily of the WhatsApp messages or Facebook posts I see from Trump-supporting aunties and uncles I mentioned. It was filled with erroneous claims about the incumbent and complete falsities about affirmative action. As I scrolled down, I stopped dead in my tracks. The words “My opponent wants to teach more Islam in School, See below from his supporters…” were written above a picture of two women in burkas holding a sign supporting Khanna and Biden-Harris.

I wanted to laugh and cry at the same time. The false claims in the email were so ridiculous, and the blatant Islamophobia was disturbing. I figured that there could be no possible way this candidate would gain any traction. I googled “Ritesh Tandon” and was shocked to learn that in the primary election he had received more than 33,000 votes, which made up 21.4 percent of the vote.

All of a sudden, it clicked. What I had dismissed as a joke, as a crazy Indian uncle spewing falsities, was actually the age-old campaign tactic of using fear and misinformation to mislead voters. Sen. McCarthy used it during the Red Scare and President Trump used it during the 2016 election. Here was another candidate exploiting fear, and now Islamophobia, to gain power.

I will not pretend that I understand the deep-rooted conflict and tension Hindu Indian-Americans, typically of my parents’ generation, feel toward Muslims, but I acknowledge that this tension does exist. Seeing a candidate hit this deep-rooted nerve and exploit it for his own political gain makes my blood boil. What makes it worse is that Tandon continues to fuel the fire with misinformation. A simple campaign email made me realize that I can no longer ignore those Trump-supporting aunties and uncles on WhatsApp and Facebook. Eventually they get off of their phones, vote and even run for office. Though they may be a minority, they are certainly a vocal minority, and the posts I keep ignoring can translate to votes. We have seen what happens when we ignore a crazy person with a Twitter account.

The Trump-supporting aunties and uncles are here to stay. Even if Biden and Harris win on Tuesday, we cannot dismiss them and assume they will go away post-election. So what can be done? Trump and Tandon are using fear and hate to recruit voters. Let’s use the opposite. Rather than ignoring or putting those people on mute, let’s engage.

The next time you see an auntie or uncle post something false, send them a private message and correct them. Send them an article from a credible source to correct whatever may have misled them. Find common ground and engage in conversation outside of Facebook and WhatsApp. Consider discussing over the phone or on Zoom because comment walls tend to be unproductive. Encourage your friends and family to do the same. Though it may seem like a lost cause, personal connections are powerful. For every Trump-supporting auntie or uncle, there are likely multiple aunties and uncles that do not feel the same way. I am a strong believer that love is a more compelling emotion than fear, so let’s exploit it.

The opinions expressed by the writer of this piece, and those providing comments thereon (collectively, the “Writers”), are theirs alone and do not necessarily reflect the opinions of Brown Girl Magazine, Inc., or any of its employees, directors, officers, affiliates, or assigns (collectively, “BGM”). BGM is not responsible for the accuracy of any of the information supplied by the Writers. It is not the intention of Brown Girl Magazine to malign any religion, ethnic group, club, organization, company, or individual. If you have a complaint about this content, please email us at hello@browngirlmagazine.com. This post is subject to our Terms of Use and Privacy Policy.