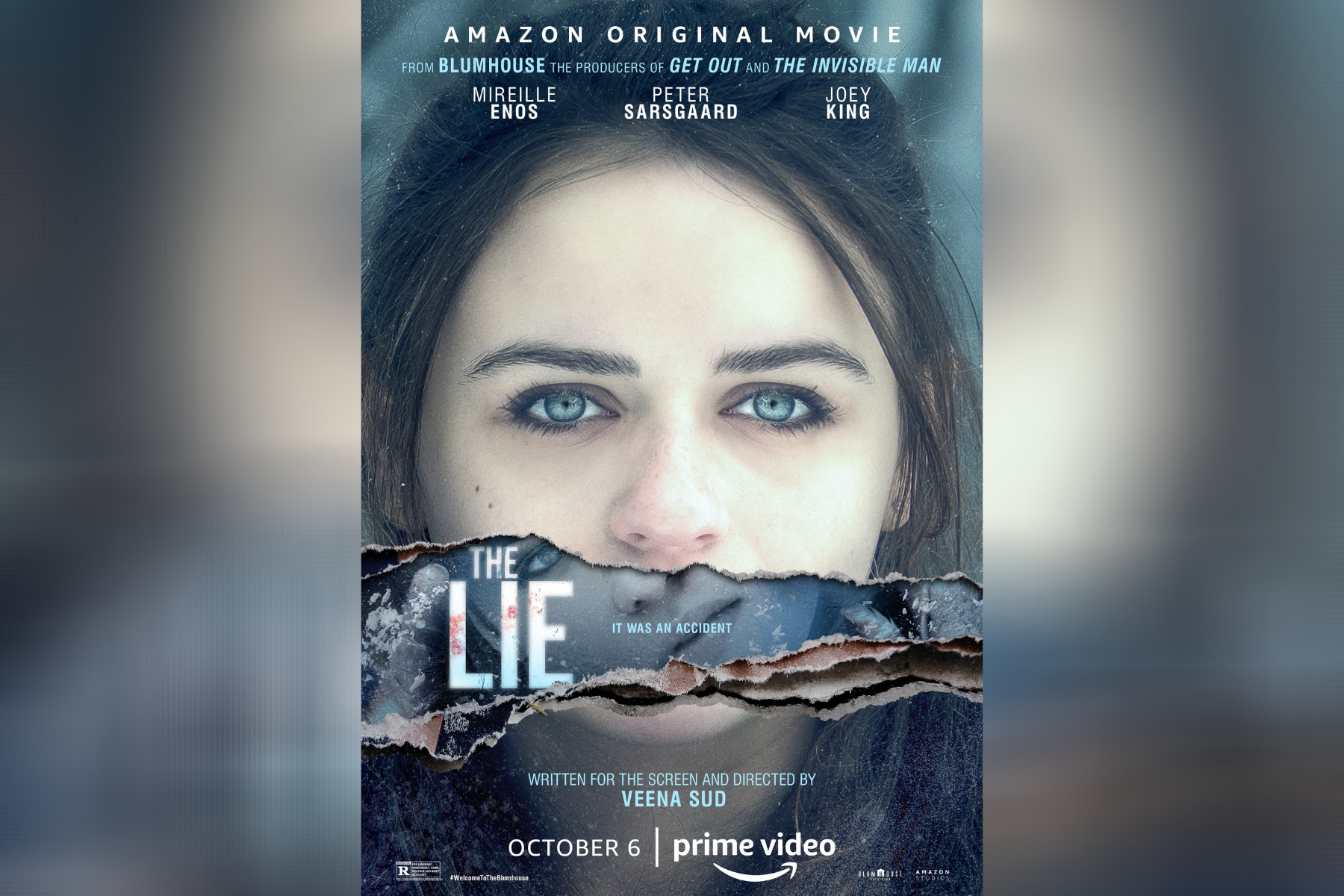 Veena Sud, writer and executive producer of “The Killing” and this year’s Quibi gem, “The Stranger,” brings us another great project she wrote and directed: the psychological thriller, “The Lie” starring Mireille Enos, Peter Sarsgaard, and Joey King. Based on the 2015 German drama film, “We Monsters,” the film was produced by Blumhouse and initially premiered at the 2018 Toronto International Film Festival. It is now streaming on Amazon.

“The Lie” follows two divorced parents who struggle with the consequences of their daughter’s deadly mistake, to show the lengths parents may go to protect their children. No lie, this film had me on the edge of my seat from the very beginning. Not only is it perfectly set in the middle of an eerie blizzard, but the cinematography allows the viewer to feel present in the moment. I’ve seen my fair share of psychological thrillers and I like to predict the outcomes while watching, but this film definitely threw me off.

Additionally, “The Lie” explores important societal themes, such as the categorization of immigrants and people of color as criminals and suspects. Veena Sud utilizes this story to examine human nature while encouraging us to question our subconscious biases and primal instincts. I had the pleasure of speaking with Sud not only about the important themes in her film but also about South Asian and Asian representation in the industry.

It seems your projects have complex female leads, what drives that decision? Is it because we haven’t seen those types of characters in the past?

“What drives my desire for complex women is a ravenous hunger because I have not seen those women in the past. I felt like I was watching blow up doll central every time I turned on the television. I didn’t see women who look like real women or act like real women or have any emotion beyond ‘I like to make breakfast and curl my hair.’ I was dying to see real women and still am. So I create as real women as I possibly can.”

What was it about the German film that made you want to remake it?

“I was fascinated by the notion of what we do in the name of love and the terrible acts we commit to protect the ones we love. When I was thinking of doing an adaptation, I was also really interested in how race would have played out in this story if it were an American story. So that became a very important element of The Lie — how a brown man who is the victim of the story becomes the perceived perpetrator in the criminal justice system that we so obviously live in. That was really important. I was also interested in who we think we are as moral creatures and how that notion of self is tested when terrible things happen to us and the ones we love.”

Reading the press notes about the film, I was really struck by the idea of immigrants and people of color being viewed as suspects, which is clearly so relevant now, and the potency of that relevancy is so intense. Was it deliberate to show a South Asian father despite the Model Minority not-so-myth?

“Absolutely, this was at a time when there was so much anti-Islam feeling in this country and obviously there still is. Seeing so many people you know going through violent attacks because of their religion and their race, which included many South Asians. So I wanted to have a voice for that experience because I think the idea of the model minority is so complex. There’s so much political agenda behind it that does not even at all reflect the reality for so many people in this country. So, I wanted to make sure that specific experience of a South Asian man who had lived his life exactly as he should but it did not save him from the racism inherent in the criminal justice system and law enforcement.”

You’ve been in the industry for quite a while now, how have you seen the progression of Asian and South Asian representation?

“I think there’s one TV show, or two with some South Asian people in it or three if you count every Asian. So yeah, there’s a way to go. Happily, Apu isn’t the only Indian on television anymore. Indians aren’t cartoon characters working at 7/11 and the only representation of who we are. That’s not enough of a bar to be like we got there or are even going there. I have been in this industry a while, and I have seen very clear mandates to tell the old happy white dude story. I’m so excited about the uprising. I really hope that it changes not only our country, but everything about everything in our industry. This is an opportune time to do that, a necessary time given everything that’s happening politically and in the election, that we know that, recognize that, and take advantage of that. So yes, change is happening.”

As an Asian and South Asian filmmaker, how do you feel this community can go about strengthening our voices in the Film & Television industry, or just in general?

“Well just having more people go into the industry, for sure. I want to say, and it’s really important to say, that there is a part for us to play as Asian people in terms of getting the training and getting the craft and insisting on being at the table. I think the vast majority of the weight is in the industry itself being brutally honest about who they really are. So what I mean is in the same way we’ve looked at Writers Rooms and said this is a problem because, numerically, Writers Rooms are still ninety percent white. We look like the Trump administration more than we look like America.

What do the Executive branches look like in the industry, who are the film critics saying whether something’s worth watching or not. Every single branch of this industry needs to come under the rigorous examination of ‘do we represent America or do we not.’ And I say all of this because I’ve seen race conversations in the industry somehow devolve into let’s just do more programs for people of color and have more go to school but it’s just like no. That’s gonna happen but what really needs to happen is the power in the industry has to change and then all of that stuff will happen. But we’re not gonna go to Film school if we’re not gonna get jobs.”

What was the process like getting “The Lie” to Amazon 2 years after it premiered at TIFF?

“The process was really incredibly prescient for where we are now. I feel so lucky to be at Amazon in a curated space around this project. I went to Toronto and then Jason came up with the idea because streaming, at that time and now, is at the forefront of releasing new films. People were releasing on streamers instead of putting in theaters and so already the tides were changing. So Jason [Blum], Blumhouse, and Amazon had the idea for curation. The minute I heard that, especially having come from many different places that have been at the epicenter of the streaming wars, it just lit me up. I said to myself, I want to be a part of this.

Because we already have this mass inundation of white noise of content and it’s so hard to know what to watch. There’s just too much and to be given vehicles, it’s almost like a Google search engine. You are helping me to see the thing that I want to see. So I think it is the future of how we watch content because everything is going to be streaming, probably for a very long time, if not for eternity at this point, so like even when holograms become a thing.”

“The Lie” is streaming on Amazon and absolutely deserves a watch. The film is one of four in a series of horror/thriller projects called “Welcome to the Blumhouse,” and each one is truly fascinating and genre-pushing in their own right. From “The Lie” to the all-South Asian cast of “Evil Eye,” to the all-black cast of “Black Box,” and finally the extremely eerie female-directed “Nocturne,” these movies are perfect viewings for our current time and show that the best is yet to come with representation in film and TV.