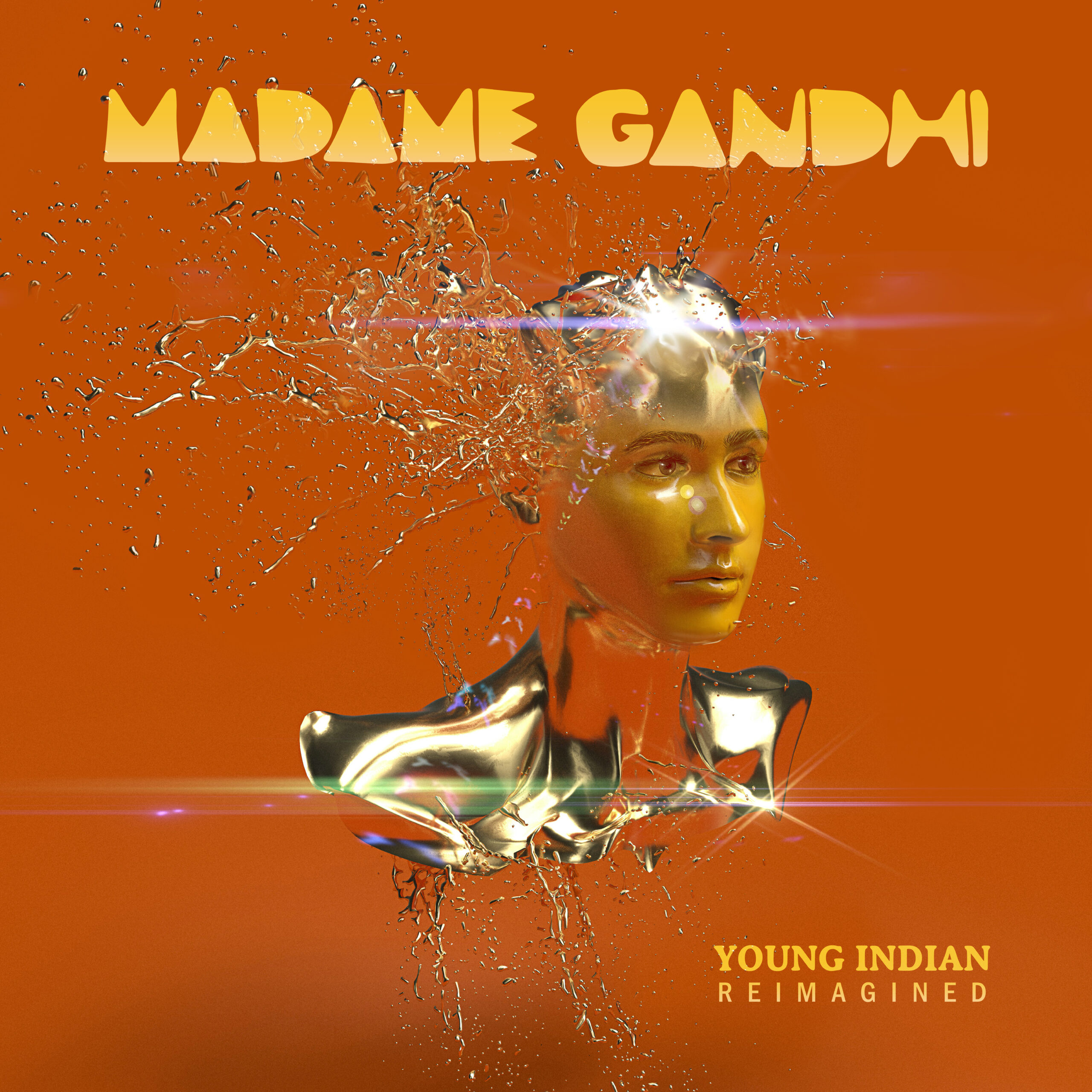 Raised in New York City and Mumbai, the young Indian woman known to the world as Kiran “Madame” Gandhi has never been able to fit into a box. She’s drummed for M.I.A. and Kehlani, is a 2020 TED Fellow and has a degree in mathematics and an MBA from Harvard Business School. Plus, she loves to box. You might have also seen her in the headlines for free-bleeding while running the 2015 London marathon, shattering stigmas about menstruation by unabashedly displaying it on the world stage.

She’s comfortable on a stage. Known for her eclectic and playful spirit — often donning a pair of round glasses over her brown hair or bright jumpsuits in her signature color; yellow — Gandhi has often championed gender and sexual liberation through her artistry in spaces where she hasn’t been the majority. Working with mostly queer, female-identifying producers at the center of her half-decade musical career, Gandhi has intentionally voiced lyrics that challenge capitalism, the patriarchy, and misogynistic views of women in music.

One of the only Indian, female-identifying students on Harvard’s campus, Gandhi reflected that although she enjoyed her time there, her voice was often disempowered and quieted.

“There were times when I would feel unseen in the classroom,” she said. “I think sometimes the program rewards the loudest and most aggressive voices in the room.”

Gandhi, who describes herself as peaceful and zen, sometimes felt overpowered by more dominant students.

[Read Related: Madame Gandhi Envelopes us in Her New ‘Visions’ Energy and it’s Worth Every Minute]

That’s how the song “Young Indian” was written, re-released earlier this month on October 2 as a five-song EP titled “Young Indian Reimagined.” Twenty-something Gandhi at the time expressed her frustration on a Boston campus surrounded by students solely chasing wealth.

Went to school to see what they are really teaching kids / Seems like making money is the only thing there is.

“Young Indian” was originally released almost a year ago to date in 2019, a three-minute hip-hop attack on the system over a melody infusing sitar, rock, and elements of electronic synth. The song acknowledges her heritage while simultaneously breaking out of a young Indian’s boxed stereotype. It sounds like something you’d hear on a rooftop party or blasting in your room in the morning as you get motivated for the day.

“When you have a song that already is going in so many different directions, it lends itself to being repurposed,” Gandhi explained her reason for having it remixed. “I also felt like there were many times when I wanted to DJ that song, but it wasn’t quite ready for a dance floor or a workout class, so I wanted to be able to repurpose it.”

The first person to remix this track was a fellow young Indian — Arushi Jain — on Gandhi’s latest remix album, “Voices Remixed.” Gandhi then had the idea to open this track to be remixed as a competition, choosing the five best DJs to be featured on “Young Indian Reimagined.” In addition to building her own community, Gandhi wanted to take the opportunity to learn from other musicians and listened to more than 500 submissions.

“I wanted to learn about other folks out there who are making great music, especially who are living internationally,” she said. “I love being able to connect with folks whose musical sense is influenced by where they live.”

“Young Indian Reimagined” presents the track in five entirely unique and distinct forms. The five DJs — Sabrina Sabotage, Yash Pathak, Marina Machine, Rich Robbyn, and BowlBay — are queer, talented, and from all parts of the world. Gandhi’s voice carries the same message, but reimagined by these DJs, it dances over new melodies spanning from reggaeton, bhangra, moombahton, salsa, and afrobeat. The DJs and their stories are as distinct as the songs.

Yash Pathak works under A.R. Rahman, a world-renowned-composer, in Chennai, India. Marina Machine on track three, reached out to Gandhi personally to thank her for being selected and became a mother shortly before remixing the record. Rich Robbyn, a young DJ & producer from Miami, surprised Gandhi with a salsa track, and Sabrina Sabotage is a French musician who met Madame Gandhi on Instagram. BowlBay, an underground DJ from London, was the grand prize winner and closes the album with a mellow Afrobeats track.

“This feels like a very kind, open, and collaborative project. It feels like a journey, and a global experience, which I love,” Gandhi said.