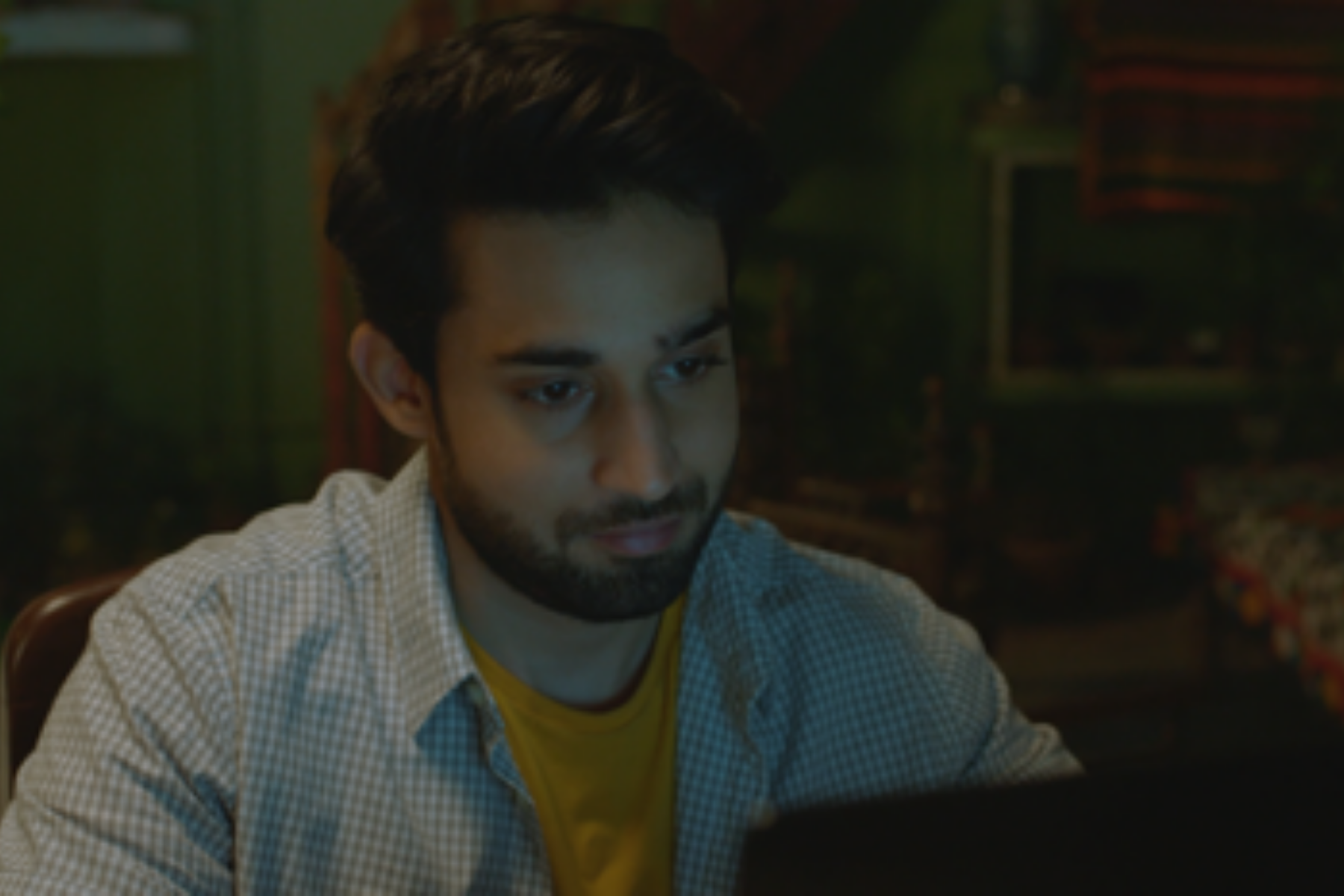 I must admit, this pandemic-infested year made me binge-watch far too many saas-bahu dramas, with their same old rigmarole of women crying over men who just turn a blind eye. Until, during a night of aimless Facebook scrolling, I came across the trailer for the web series “Ek Jhooti Love Story.”

Directed by Pakistani national treasure Mehreen Jabbar and with a stellar cast, I was immediately sold. This blind faith in Jabbar’s infamous creativity led me to set up a cross-continental Zoom chat with one of Pakistan’s most versatile actors, Bilal Abbas Khan, who lead stars as the socially awkward boy-next-door, Sohail.

Our everyday Karachiite, Sohail belongs to a middle-class family, with exalted expectations for a life partner. In the pursuit of ‘true love,’ he resorts to a fake social media persona — Nofil — to woo his dream girl, Natalia, only to find out his neighbour Salma, has in fact been pretending to be his fantasy woman! In the digital age of excessive cyberbullying and cat-fishing, does Khan find the story-line raises a few eyebrows?

I can see why the theme of the drama may look as if it revolves around cat-fishing. However, it really does not. It does not glorify it — we don’t endorse or condone it in any way. In fact, it preaches the exact opposite; that resorting to such drastic measures is never the answer. We must find healthier outlets to build a higher sense of self-esteem, and not let our insecurities ruin our personal worth. It definitely will not be raising any eyebrows!

[Read Related: In Conversation with Asim Abbasi: the Mastermind Behind ZEE5’s ‘Churails’]

Chalo, cat-fishing na sahi, but doesn’t it follow the same pattern of mothers fretting over unmarried children, and rishta aunties scrutinising their every move? How does “Ek Jhooti Love Story” set itself apart from the plague of unhealthy matchmaking TV shows our audiences seem obsessed with?

I do agree the topic may seem a little old school. But the kind of message we’re trying to convey is very different. Despite the seeming redundancy, it’s written in a way that is simple yet effective, straightforward yet unique. It’s different because Umera Ahmed’s crisp writing has a deeper impact on viewers. We don’t talk about rishtas in the drama – we talk about the choice of having rishtas. We talk about the freedom that should be given to South Asian adults — whether they even want someone to rishta hunt for them or not. Also, we usually see these narratives in serious dramas. This is complete humour, but with a wonderful message.

Millennials and younger generations are much more open-minded and rebellious but how does this drama help in changing the perspective of older generations about online dating and love marriages?

Art and dramas always help in starting a dialogue, a conversation. Things are changing — slowly but gradually — but they are changing for the better. It will not shift their perspective overnight, but it will drive them to ponder and think. The drama highlights choice, personal freedom and how all that glitters is not gold. Just because our elders want us to marry someone doesn’t mean it’s good for us or our happiness. Grass is not always greener. It can be yellow, orange, red — depending upon how life turns out — OR how we choose to perceive it.

Speaking of personal freedom and choice, Mehreen Jabbar is renowned for tackling tough subjects in a fantastic, thought-provoking way. Working with her is often described as every actor’s dream – and Khan agrees.

It honestly is! I’ve been her fan since day one. To be able to work with her has been such a brilliant opportunity. We’ve seen Mehreen direct many serious dramas and tackle tough issues in the past. To be able to address a vital topic in a comedic manner with her has been phenomenal. She puts everyone at ease, and delivering lines never feels like following a script. It’s always natural — as close to a real-life conversation as possible.

Comedy can be a tricky genre, as it’s not easy to make people laugh. How did Khan transition from the sinister Wajih he played in the 2019 crime drama series “Cheekh,” to the sweet Sohail in “Ek Jhooti Love Story?”

I make a conscious effort to look for scripts which are different and unconventional. When I found out I would be playing a part alongside so many talented people, it was truly amazing. However, “Ek Jhooti Love Story” is a situational comedy. The circumstances around us are hilarious, but I don’t have any punch lines. It’s a drama your everyday Karachiite can relate to, which is why it didn’t require me to transform into a character I’m not. I only wanted to look the part, have fun and enjoy. Other than that, all I had to do was be myself.

“Ek Jhooti Love Story” does seem to be a brilliant commentary on desi society and its often regressive approach to life.

Catch the magic that Sohail and Salma brew on our digital screens – exclusively online at Zee5.