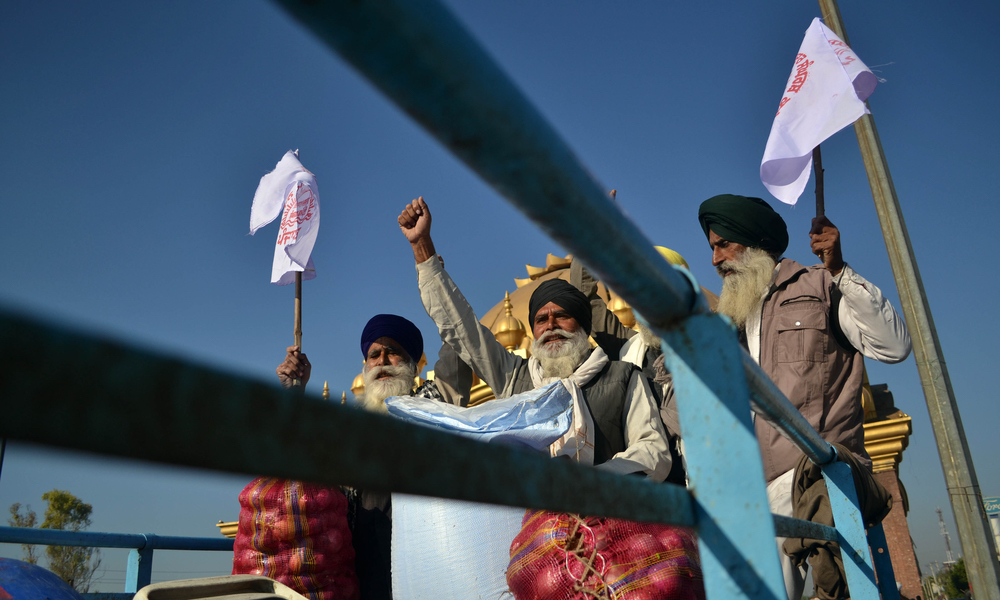 Farmers shout anti-government slogans as they leave for New Delhi to join the nationwide protest against new legislation passed by centre government in Amritsar, Punjab | Photo by Sanjeev Syal via Shutterstock

Recently passed agricultural legislation by the Indian government has led mass numbers of farmers to take the streets of Delhi to protest. Agricultural states such as Punjab, Haryana, Uttar Pradesh, and Telegana are protesting against three specific agricultural bills passed by Prime Minister Modi’s Bharatiya Janata Party (BJP) in September: the Farmers (Empowerment & Protection) Agreement of Price Assurance and Farm Services Bill, Essential Commodities Act (Amendment) Bill, and the Farmers’ Produce Trade and Commerce (Promotion and Facilitation) Bill. Under these new laws, as Prime Minister Modi argues, the agricultural system will be streamlined and farmers will have more freedom to sell their goods at any price directly to private businesses, as opposed to having to sell their produce through auction known as the “mandi system.”

However, farmers argue that these bills will collectively privatize the agricultural system, making them vulnerable to corporate exploitation. Privatization means farmers will not have a guaranteed minimum support price (MSP) for crops, and, contrary to Modi’s claims, this will actually inhibit farmer freedom: They will become more dependent on corporations and private farms. Under the new laws, large corporations can dominate the market by driving down prices and diminishing any advantage farmers had at setting their own produce prices. This will add to India’s growing unemployment and debt the farming community is already facing.

The new laws disproportionately affect small landholders who lack the resources to recover from losses, lack the influence to negotiate on their own behalf, and have fear of losing their land to private firms. According to Al Jazeera, many farmers argue the current state-controlled mandi system needs reform within the food supply chain to give farmers more options to sell their crops to make a profit and that these new laws will only further disempower farmers economically and within the agricultural system as a whole.

[Read Related: The Loss of my Ancestral Tongue: Why I Regret Not Learning Punjabi]

Here’s some generational context to the agriculture community in Punjab:

Agriculture informs much of Punjabi culture at large. The folk dance and music form of Bhangra originated to celebrate the time of harvest in Punjab, and Punjabi folk songs touch on the heritage of the agricultural community. Despite the popularized, mainstream attention Punjabi culture gets, state violence against Punjabi communities is often not known or ignored. The Indian government has historically disempowered working-class Sikhs economically, politically, and religiously. We live in a society in which the Indian government has still not acknowledged its role in the 1984 Sikh Genocide, and men of all ages within the Sikh diaspora are still harassed for wearing a turban.

These hate crimes have been consistently overlooked and not brought to mainstream media or normalized. At the start of the protests, social media platforms like Instagram temporarily blocked hashtags like #Sikh for violating community guidelines. The hashtag was later unblocked and found searchable on Nov. 28 after various community complaints. This is not the first time social media platforms have blocked Sikh-related hashtags. Instagram and Facebook first “mistakenly” blocked #Sikh for months and unblocked it in June after a similar backlash.

What are the implications of policy violence against farmers amidst a pandemic?

More than half of India’s workforce is made up of agricultural workers, according to India’s most recent Census, and a large concentration of farming can be found in Punjab. For instance, as of April 30, Punjab produced over 50 percent of the 13 million tons of wheat produced during the COVID-19 lockdown. This means approximately 7 million tons of wheat came from 1.5 percent of the geographical area of India, The Economic Times reported. Punjabis have fed our ancestors and continue to feed our relatives, but now they face the possibility of food insecurity, unemployment, and poverty due to these new laws.

Amidst the COVID-19 pandemic, these farmers were already experiencing high debts and farm bankruptcies due to lockdowns. The privatization of farms will only exacerbate inequalities and poor living conditions for farmers who can’t compete with corporations and private firms.

The new laws set in place are an act of policy violence. They have not only led to police-state violence against protesters, but the resulting consequences of these policies can be considered violent too. According to eco-feminist Vandana Shiva, many women in Punjab seek economic independence from agriculture work, and if unemployed, women can be more susceptible to violence and sexual assault. Additionally, corporate control over farms will lead to the ecological destruction of rural land. These farmers hold cultural, generational knowledge about how to cultivate and tend to land that corporations will only look at to maximize profits off of. Furthermore, farmers were already experiencing high suicide rates in recent years. As farming conditions worsen, there are alarming implications that these rates will rise. These new farming laws are at the expense of a common pathway to women’s agency, our earth, and frankly, the survival rate of our farmers.

Some organizations you can follow and support to provide aid to farmers in Punjab:

Khalsa Aid is currently facilitating langar for farmers that are en route to Delhi. This organization has been at the forefront not just for Sikhs around the world, but any community that needs its support and assistance.

All donations for this fund will be handed to the Guru Nanak Langar Sewa Society. These donations will give the organization an opportunity to assist impoverished families that are crying for help in these turbulent times.

Sahaita is a non-profit organization committed to educating, supporting and uplifting the underprivileged members of society. 100 percent of their donations are allocated to multiple issues, targeting nearly all districts of Punjab.

Kisaani is a brand dedicated to supporting the Kisaan Movement. They create excellent designs in apparel, with all profits going to families of farmers that are no longer with us in efforts to support their livelihood.

Phulkari Co. and Sahaita collaborated and designed beautiful apparel to support the Kisaan Movement. One hundred percent of the profits of these specifically-designed tees will be going to Sahaita to support farms back home.

Punjabis exist in spaces outside Bhangra music and of crude appropriations in Bollywood. Punjabis are the backbone of the agricultural system in India, and right now, in the streets of Delhi, these farmers are being blocked by the police, beaten, and sprayed with tear gas and water canons. I urge the South Asian diaspora to see how the agricultural community in India is foundational to sustaining society. Farmer livelihoods deserve proper protection and support from the state. Do what you can to make a difference, share our post with your online community, make a donation, and spread awareness. It’s the least we can do for the farmers aka the foundation of our country.