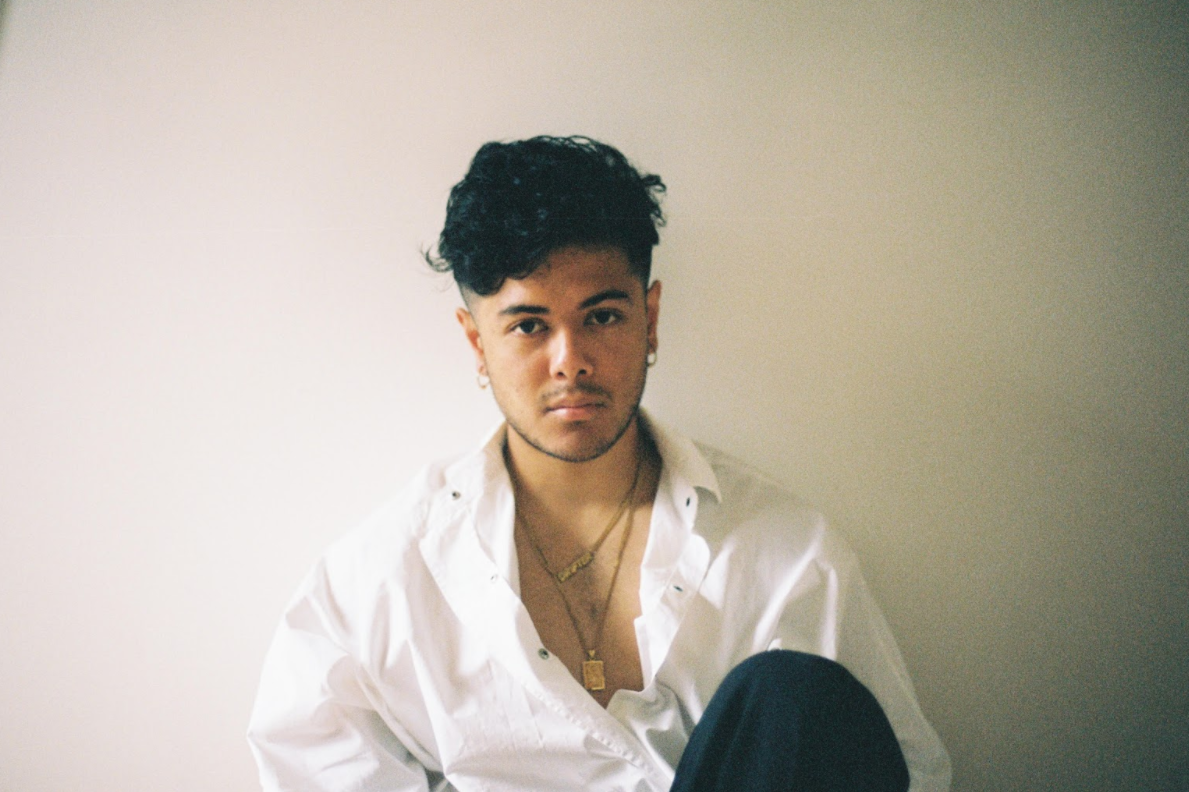 Both feminine and bold optical illusion-like photos crowd Joshua Sim’s Instagram page. In one photo, a woman stands holding a mirror that reflects delicate rose petals. Peering closer, you can see a man is holding the bouquet. In another photo, a man stands in a field with floating lavender balloons behind him. There’s a matching flower in his hair. We’re left looking at Sim’s photos like they are in an art gallery, noticing small details here and there, wondering if they were intentionally put there or if the photo captured natural magic.

As an Australian-Chinese-Indian, Sim has learned to take these cultural tropes and mesh them with contemporary ideas. His work on his Instagram reflects like a classical painting. Through the composition, lighting, and models, Sim’s photography style emulates a stunning dialogue between an artist and an art historian. Sim showcases the complexities of assimilation, diversity and decolonization.

Sim hasn’t received any formal training in art or photography. He studied philosophy and anthropology. Despite this tangent, Sim uses these fields to tell the stories of people of color. His lens captures those who have experienced troubles of being on the peripheral of modern-day beauty, all while challenging the answer to who gets to have their story captured.

[Read Related: Radical, but not too Radical: Unveiling Racial Disparity in the Art World]

The question, “Where are you really from?” might seem trivial and innocent, but for racial minorities and people of mixed ethnic backgrounds, it can often be invasive and traumatic. (I was born in Australia to Singaporean-Indian parents with grandparents from South India, so I share a very similar cultural background to Sim.)

Sim himself was born in Singapore to a mother of Indian Goan heritage and a Chinese Peranakan father. He knows a struggle of never quite being able to form a one-worded answer to where he’s from. It left him confused.

“Growing up, I had been left to believe that to be Indian was of the face to don a bindi, of the body to adorn a sari or sherwani, and of the tongue to speak Hindi,” Sim said. “Yet the Goan identity serves as a challenge to this brash desi place maker; with a style that has been described as Westernised, of the Portuguese influence in our mother tongue of Konkani, and of architecture that would make one believe they were in the streets of Europe.”

He has slowly begun to learn the beauty and power that comes with holding so many different cultures and stories within himself.

Through the models he selectively chooses to be the face of his work, Sim is not only returning to his roots, but he is also helping others do the same and reclaim their identities back from the grimness of colonization.

Tired of feeling disconnected, unrepresented, and uninspired, Sim is dismantling walls through the subject and stories he chooses to showcase in his work. Sim recently published his work in the glossy pages of Vogue Australia’s August feature.

“This achievement serves as a disruption. A disruption of the status quo that has defined this industry since its inception during and after the White Australia policies. To say that a brown kid from a working-class background has the opportunity to be published in one of the world’s largest fashion magazines is far from unimportant. To me, this represents that our waves of protests, conversation, fights, articles and cries for change are no longer falling on deaf ears.”

He doesn’t want to grant too much catering to white publications that he believes have alienated minorities.

“If we as subjugated minorities and silenced populations have the ability to tell our stories on platforms like these, it’s a step in the right direction. To help establish our own voices and our own platforms for our own selves,” Sim said.

Honing in on Inspiration

Cultural identity is what influences Sim’s photography. Specifically, he finds inspiration in diverse cooking. For years, he struggled to find the exact recipes for the meals his parents made him.

“Perhaps the single element that best unites the cultures of my parents is this idea of a sense of feeling and trust within the spirit,” Sim said. “I’m sure any ‘ethnic’ person can relate, is that unlike the West, our trust does not come in numbers or quantity, but rather so a sense of feeling and intuition. A dash of salt, a sprinkle of turmeric, a handful of cinnamon. These are all but guides that our spirit has to decide for us.”

This is the same formula he applies to his photography and writing.

With decolonization as a vivid theme in Sim’s photography, he reflects on how he honors people. For Sim, he believes a camera is a tool of the colonizer.

“To ‘capture’ the lives and bodies of the ‘Other’ world and to be put on display for the Western world to view with exoticism and fetishization,” Sim said.

“Objectified for the colonizers as our culture was put on display. Placed in confinement inside the box that is the frame of a photograph. Our culture is commodified and packaged as our voices silenced. Colonizers would collect and learn about our cultures; and in turn, learned how to dominate and colonize us in the process. The camera is a single tool amongst their arsenal of guns, whips and money to control the Other.”

Yet, resistance is framed in his work.

Sim says the camera can still spread unique messages because the subject within the photo is worthy and vital enough to be captured.

“In the past, the colonized peoples were put in this frame to signal the concepts of inferiority and exoticness to the White audience,” Sim said. “Today, however, we as artists behind the camera now have the capacity to use this signal as a way to tell our own stories, of power and beauty.”

His work represents a shifting narrative of power to minorities.

“There is still a very long way to go to create a sense of equity and justice, but the very presence of my, and so many others’ art in these spaces is an inherent form of decolonial practice,” Sim said. “We as descendants of colonized people may not experience the pain to the extent our ancestors did. But, we still bear within us their trauma, as well as their stories — which I believe is our duty to continue to share.”