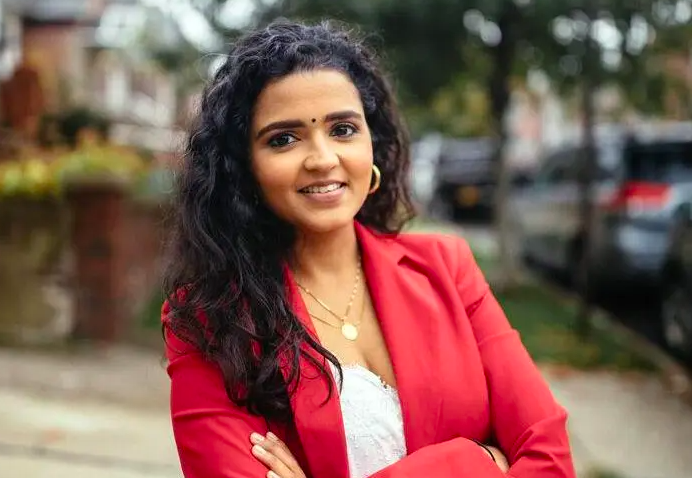 It’s very clear that small business owner, community organizer and hopeful city council elect for Queen’s 24th District in New York City Deepti Sharma doesn’t view her campaign as solely hers. Sharma is very careful to say “we” and “ours” when it comes to her campaign goals and ambitions as opposed to “I” and “mine.”

“When I started my business, I knew I wanted to create an impact and work for the community. I want to continue working towards impact in city council as well,” Sharma said.

In a year that has been historic for South Asians in American politics, Sharma is running in a special election for the Central Queens council seat that was vacated by Rory Lancman on Nov. 4.

The election, set to be held on Feb.2, is to fill the seat that will represent Kew Garden Hills, Fresh Meadows, Hillcrest, Pomonok, Jamaica Hills, and Briarwood.

Like most South Asian children, Sharma was privy to the expectations of becoming a lawyer, doctor, engineer or any of the other traditionally lucrative career paths.

“None of it attracted me. I didn’t know what I wanted to do. I was good at math and sciences luckily, but it didn’t stick. When I got to college, I realized that political science is interesting and a powerful way to contribute to the community.”

She attended Stony Brook University in 2004, and the summer after her freshman year in 2005, she had secured her first summer internship in a mayoral campaign for Fernando Ferrer, where her love for politics truly began. She spent the next three to four summers working in political campaigns and a political consulting firm.

“Campaigns are so interesting because you meet people from all walks of life. Not everyone necessarily has a political background, but they’ve all been through different campaigns and they bring that with them. It’s similar to being an entrepreneur/small business owner for the past 10 years.”

Her graduation coincided with the great economic recession of 2008. Law school seemed like the logical next step but Sharma wondered whether it was the right move. She described her segue into entrepreneurship almost as an accident.

“I waited in line for a food truck for 20-30 minutes, like an impatient New Yorker, for just one peanut butter cookie. I could have gone anywhere else. What I took away from the experience was access. The only way I could get the food was to stand in line, pay in cash, and walk away.”

Sharma reflected on her experience with food trucks – she wondered why one could order online from a restaurant but the same could not be done with food trucks. Shortly after, she began having conversations with food truck owners. She learned that they didn’t see themselves as business owners but rather just as workers

“Someone in their community told them having a food truck will be a good thing to do – it’ll help them pay the bills and pay for their kids to go to college. But they didn’t believe they were business owners. That experience triggered me.”

Sharma noticed that while different food trucks offered different varieties of food, almost all of them employed the same images for marketing. All the ingredients from the sauces they used to their fresh produce were different across food trucks, but to a New Yorker, they could all look the same.

“What I realized from these conversations is that nobody was building a tech company with small business owners, immigrants, women, or minorities in mind. A lot of opportunities don’t come for POC or Black or brown businesses in terms of capital or marketing tools. Tech companies build for convenience culture.”

Sharma had found her purpose – to use technology to provide opportunities for immigrants, women, minority-owned food businesses and vendors to help them grow and scale. Her business FoodtoEat was created in 2011 and was borne out of the dire need for representation in the technology field. The community-minded catering service helps businesses book catering opportunities at large corporate offices such as Warby Parker, Microsoft, and the Skimm.

By pushing companies to think about diversity and inclusion through food and beverage, Sharma knew that true representation goes beyond just hiring people of color. It also meant having food that is representative of different cultural groups — to open one’s mind and palate.

“We started something called ‘I made your food’ where we photograph owners and chefs with the food and the catchphrase and send it along with the delivery. No one really pays attention to chefs or restaurant workers, and no one really thinks about where their food came from. We wanted to change the narrative and empower mom-and-pop shops.”

Again, it is noteworthy Sharma never used the word “I.” It was always “we.” This focus on community was evident when FoodtoEat took a hit with the onset of the COVID-19 pandemic. The organization pivoted from a B2B model to a focus on food insecurity in order to buy meals from restaurants to give to people who were food insecure or organizations that worked with single mothers or survivors of gender-based domestic violence.

FoodtoEat also distributed food to brown and Black communities that were on the frontlines in senior homes and hospitals. The company also formed a partnership with the World Central Kitchen to provide around 100,000 meals to organizations in the past six months. Currently, the small business is still continuing in food insecurity work – almost like a nonprofit, as Sharma describes it – and is working hard to get grants to do the work. The business fundraised 130,000 dollars during the pandemic, half of the money coming from the company’s network and the other half from grants.

“We took an interest in food insecurity because we ran a catering logistics company. We took our expertise in already doing it for large corporations and thought about how to distribute food. We saw that there was so much suffering happening, and we wanted to do everything we could. People were also very giving.”

With all her work in advocacy and community engagement, the question remains– why is Sharma running for city council?

It may just be the perfect time for Sharma to re-enter the political realm. Why not as a city council member?

“The district has never had a mother, POC, or a woman. It has never had a small business owner. It is not just about race, ethnicity, and gender but also about [bringing] a diversity of experiences.”

As a small business owner, Sharma talked about how she knows what small businesses are going through right now. As a mother of two, she knows what it’s like for parents to live in New York City and try to support their children, the same way her mother tried to support her by “waiting in line at 6 AM so that [Deepti] could get into an afterschool program.”

“I don’t want families to go through what I’m going through – can I afford childcare and to move into a two-bedroom apartment? Or do I have to stay in a one-bedroom with my two kids?”

The issues that Sharma hopes to tackle include: food insecurity, rent relief, childcare, lack of funding in the schools, and lack of affordable housing for seniors and the homeless.

Learn more about Sharma’s campaign here and follow her on Instagram and Twitter. Election Day for City Council District 24 is February 2nd, polls will be open from 6 AM to 9 PM. Find your polling place here.

A lifelong entrepreneur, Deepti is the CEO and Founder of FoodtoEat, a community-minded catering concierge service. She started FoodtoEat in 2011 to connect immigrant, women and minority-owned food vendors to opportunities for growth - ultimately helping them strengthen their own business skills. FoodtoEat helps businesses feed employees great food and build stronger & more diverse work cultures. She is also a Co-Founder of Bikky, a platform solving customer engagement for restaurants. As a mother and small business owner, Deepti is a vocal advocate for policies that benefit these communities. She served on the Board for the Business Center for New Americans, a non-profit that encourages immigrant entrepreneurship by providing micro-loans and financial education. She also writes about how companies can modernize motherhood in the workplace, and mentors female entrepreneurs as part of the NYC Mayor’s WE NYC initiative. Deepti is a World Economic Forum Global Shaper, a Forbes 30 Under 30 alumnae, and an avid runner. She lives in Queens with her husband (Abhinav Kapur) and two children (Zubin & Chetan).