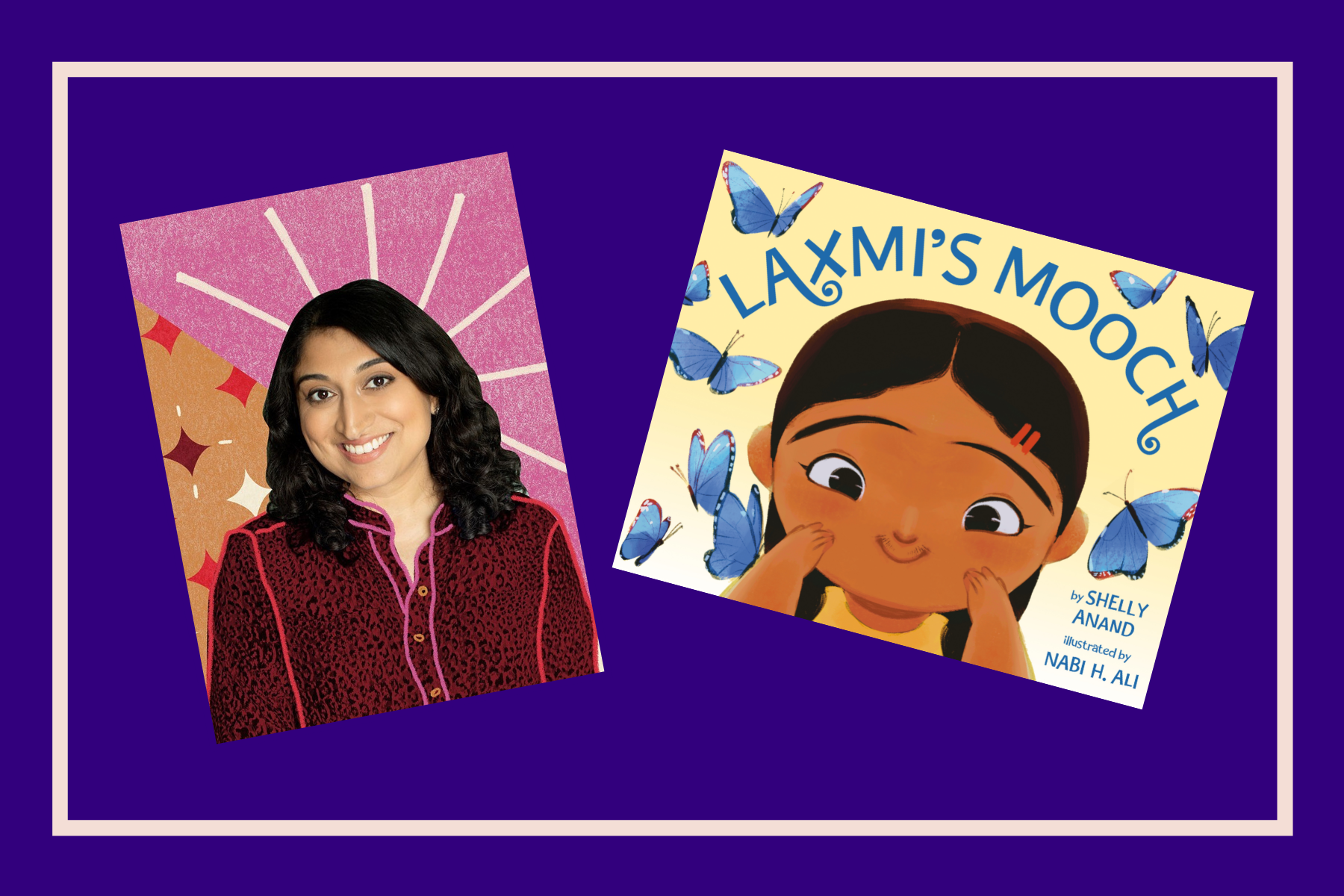 A brown girl’s journey with her hair is always an emotional and personal one. For me, it started in the sixth-grade gym. More specifically when Scott pointed out that I had “man arms”. In retrospect he was probably just jealous he couldn’t grow his own hair, right? Other girls wore their short shorts and tank tops proudly stamped with a Hollister bird or an Abercrombie moose and then there was me: decked out in layers of Walmart trying to hide every hair on my body.

That’s why I was so excited when I heard about Shelly Anand’s newest children’s book, “Laxmi’s Mooch,” a body-positive picture book that follows a young Indian American girl’s journey to accept her body hair and celebrate her heritage after being teased about her mustache. I had the opportunity to talk to Anand about this beautiful book and the need now, more than ever, for its existence.

[Read Related: Curls, Curves, and Confidence: a Story of Fighting Through Body Shame]

Who inspired you to write such a specific story?

The idea came to me in 2017, when I was on maternity leave. My good friend, also South Asian, had a daughter in kindergarten at the time and she called me saying her daughter had come back from school and a white girl had teased her about her mustache and she was crying. We talked about how we remember being teased for being hairy, but it was in 4th or 5th grade. Six just seemed so young. My friend asked me “Am I supposed to take her to get it threaded or waxed?” And I was like “No that’s insane, you cannot take your six-year-old to get a wax!”

So, Shelly had another idea. She sent her friend illustrations by the Pakistani American artist Ayqa Khan. A lot of Ayqa’s work depicts South Asian women openly displaying body hair and it’s absolutely beautiful. She told her friend to show her daughter these pictures, talk about Freida Khalo and really show how beautiful women can look with their hair.

A few weeks later I was at my parent’s house. I found a journal from 4th or 5th grade and I found this passage where these two boys in science class had said that I looked like a man because I had a mustache. I wrote in this journal about how my tears were coming down and I was so embarrassed and this white girl, who I thought was my friend, was laughing along with them and that’s what hurt the most. But it got me thinking, how do we heal from this? And what would I want if this were to happen to my daughter? What would it look like if we embraced our hairiness and saw it as a point of pride?

To Shelly, it’s important not to shame any woman or person who wants to do hair removal – that’s not the point of the book. Her goal is to help create a reality where removal isn’t the only option and that hair doesn’t have to be a “problem” that needs to be “fixed.”

Personally, I think the pandemic has influenced my own journey with body hair where now I don’t care if I’m wearing a dress and my legs aren’t shaved. Threading salons have been open but I haven’t felt the need or rush to go!

Do you feel that the pandemic has impacted your journey with this book and its release?

It’s interesting having this book come out in the middle of a pandemic because I’ve been talking about my pandemic mooch and I haven’t done my eyebrows and upper lip and now when I think about the journey of writing this book, that’s not a priority for me anymore. Hair removal is just a big part of our preoccupation of beauty and western beauty ideals, but a lot of us don’t realize the trauma associated with it. I know a lot of people who are triggered by the smell of Nair or we remember our mothers putting bleach on our skin as a child. And I don’t blame our mothers at all. They were struggling as immigrants and wanted us to assimilate and not be looked down upon.

Throughout my conversation with Shelly, I felt like my own memories that I had repressed sneaking back out again. Remembering making excuses to use my mom’s shower so I could use her razor to shave my arms which is something I do not recommend. Or studying genetics in 9th grade and trying to hide my hairy knuckles.

Why can’t we all just have the confidence of Kajol and embrace the unibrow?

Seriously though!! But it all goes back to western beauty standards right? I’d go back to India and people would say to me, how could you wear sleeveless without waxing your arms? And I’m like “I’m hot! I cannot wear full sleeves!!” That’s such a good point because as long as we as a community keep putting these standards on ourselves, we can’t expect the outside world to interpret it any differently than how we’re interpreting it.

Shelly then explained that that’s what she was trying to accomplish through the book’s character Zoe. This book isn’t just for brown kids. It’s also for the kids who have blonde hair or no hair. If we can teach “Zoe’s” that hair is not something we need to draw attention to, then we can stop perpetuating these stigmas at a young age.

What I also loved about the book was the very meaningful choices you made on how everyone looks! It’s incredibly inclusive. Why was it important for you to make sure Laxmi’s world looks like our real world?

I really appreciate you asking that and I need to also give credit to my illustrator, Nabi Ali. We very much wanted him to read the manuscript and as an artist, really envision the world that Laxmi is living in and I think him and I share a lot of values. The team at Kokila was a big part of it too, their Art Director Jasmine Rubero came up with the beautiful idea of having an all-gender restroom. And I definitely wanted the classroom and the world that Laxmi is in to be this diverse space because that’s very important to me in how I raise my kids.

Shelly also spoke a lot about the importance of creating solidarity across brown communities through the characters Lucha and Arazoo. This is not just a story for Desi women! It’s for Persian women, Latina women, etc., etc.

What do you hope parents will take away from reading this to their children?

To the parents who grew up with strict standards of beauty and how one should look, I hope this gives them perspective to say “I don’t need to make a decision today about my daughter or son.” Just let our kids look and be who they are and just help them find love and acceptance and help them celebrate their bodies. Let’s remind them they’re not alone and figure out some tools to help them stop feeling self-conscious about it rather than let’s start this 30 to 40 year process of hair removal at such a young age.

The second your kid brings it up, the way you react is going to be the way this child internalizes what it means to have hair and that reaction is important. If they have a problem with the hair and your instinct is to bleach that shit right away, then that’s now how they’re going to grow up thinking about their hair. And as South Asians, the way our parents perceive us and react to us is held in such high regard.

Absolutely. I grew up in a household that was so focused on looks and appearances and Bollywood, and I’ve had to do so much work to have to unlearn and I don’t want that around for my kids. I want them to have freedom of expression on how they dress and appear to the world. And that’s why Laxmi’s mom is this cool darker skinned mom. She’s definitely not me but I aspire to be more like her. And I hope she’s there for other parents as well.

I was shocked when Shelly said that Laxmi’s mom was not based on herself but rather on someone she aspires to be. It’s a constant reminder that we can and should always be learning and trying to be better; it’s a practice. Just as we create self-care journals or internalize positive messages, for Shelly, writing about Laxmi and talking about Laxmi is a practice for her on her own journey of self-love and acceptance.

Talking to Shelly and reading “Laxmi’s Mooch“ was a very healing experience and reminded me of the runway ahead to change the way we accept our hair. Through dialogue and books like these, we can create another reality where women celebrate the hair on their bodies and don’t think it makes them less beautiful. Because in a world where I see (way more than I’d like to) people wearing knee-high socks with crocs, there’s no reason we can’t all rock a mooch.