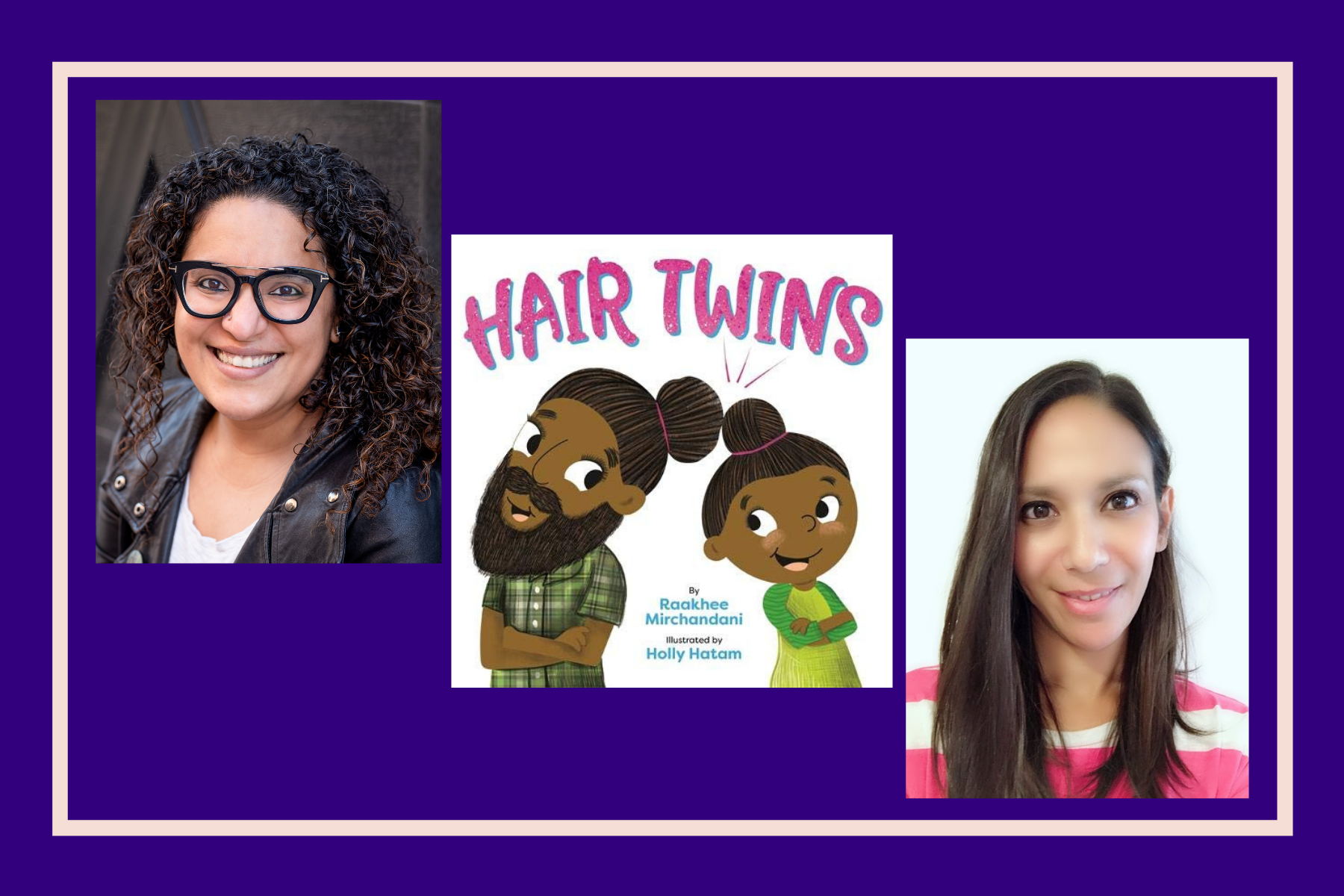 Growing up, every Sunday morning started the same way for me. My siblings and I would get dressed for the Gurdwara and wander over to our parents’ room, where we would sit and wait for them to finish getting ready. My mom, in her salwar kameez, would be putting on the finishing touches of makeup and accessories. And my father, in the next room, would be drying his dhari and combing his hair before wearing his paghri. Sometimes, I would stand next to him as I combed my own hair. Side by side, father and daughter would engage in an activity that I didn’t really know how to share with my school classmates lest I get bullied or made fun of. It never seemed like a consequential or momentous moment. But it became a morning ritual that I kept deep within the pockets of my memories.

I never really thought of sharing this ritual or memory with anyone, at least that was the case until I read “Hair Twins,” a children’s book written by Raakhee Mirchandani and illustrated by Holly Hatam. The book details the story of a Sikh father and his daughter who share a special bond — much like the bond between my own father and me — and proudly celebrate not just their long hair but their love for one another.

“I watched Satya as a little girl and she’d stand next to Agan (Satya’s dad) every day,” says Mirchandani.

Mirchandani’s first book “Super Satya Saves the Day” was written so that her daughter Satya could see someone like herself on book covers, portrayed as a hero no less.

“But with this book, I wanted to tell everybody the story of this father and his daughter daughter, who is adorable and beautiful. My sincerest hope is that people that read this book feel compelled to share their stories with the world.”

Mirchandani wrote most of the book in a bar in Hoboken, New Jersey, and the ideas just seemed to flow out of her.

“The book came together quickly. I knew what I wanted to say. Not a lot of books or media showcase brown, turban-wearing, Sikh men who are good, caring and nurturing.”

For Mirchandani, it was very important to her that she shows the Sikh father in her book going through the motions of grooming his beard and hair.

“Children will always wonder what is under Agan’s turban and I wanted to show the father in the book wearing a juura and a patka.”

I couldn’t help but think back to my schooling days when my classmates would sometimes shyly, or sometimes audaciously, ask me what was under my father’s turban. As one of the few children who had a Sikh father with a turban, I remember finding the question intrusive. If only I had Mirchandani’s book to share during show-and-tell.

Hatam, the book’s illustrator, was immediately drawn to the story of “Hair Twins” when she came across it through her agent. She similarly had never seen a book about a Sikh character as the protagonist.

“Growing up in the ‘80s in a very small town in Canada, I experienced racism from a really early age. I never saw myself in books or movies. I felt ugly. I hated being in my own skin. I was ashamed of being Iranian. I’m not very open with where I come from because people instantly label me.”

A self-declared bookworm from a very young age, Hatam was drawn to the illustration of children’s books out of a passion and desire to create a more representative space.

“This is what I’m trying to fix with books, and my art is shining light on the characters that never get the spotlight.”

I asked Hatam about her continued use of nature-based colors like green, yellow and blue throughout the book. The cover of the book depicts a Sikh man wearing a green plaid shirt (a shirt my own father definitely owns) and his daughter wearing a matching green dress.

“I wanted to use calming and natural colors. When I look at those colors, they make me happy and I [want] to make people happy. I wanted to keep the relationship depicted between the father and daughter light and happy,” said Mirchandani.

I would say she is successful in her endeavor, as page after page, I saw the joy and love radiating from the colors to the playfulness depicted in the imagery.

The playfulness in the illustrations is influenced by the language Mirchandani uses. For example, there is a part in the book where the father and daughter go to the park to meet up with other parents. In this scene, the words and imagery beautifully come together as every character drawn by Hatam is intentional, from their ethnicities to the array of parent-child relationships. This line in particular succinctly packaged the premise of this scene in the park:

“Today we all run like unicorns, a herd tearing through the park. Braids and buns, spiked and shaved — we all fly together.”

“That line is very important to me. I wrote it very purposefully and intentionally. It shows us what we believe about who we are. We are individuals. But we are also together,” said Mirchandani.

Hair is a component of the Sikh faith that speaks to this connection and unity one has to each other and community. The faith puts forward notions in commitment to service, equality and social justice.

[Read Related: Book Review: ‘Why is My Hair Curly?’ by Lakshmi Iyer]

My favorite part about this book, however, is that Mirchandani doesn’t see a need to provide any of this exposition. Through the relationship between the father and daughter, we see the details and nuances of the Sikh faith portrayed throughout the pages. The characters are seen wearing kaaraas on their hands and the father’s long hair is tousled down past his shoulders. As a reader, I felt as though I was reading a storybook about a family, first and foremost. It wasn’t as though Mirchandani needed to give readers a Sikhism 101 lesson.

“We’re sharing our stories and it feels like it’s never been done before, but we do have to acknowledge that there are people who have been doing this for a long time. There are authors who are part of the Sikh communities who started this work of sharing our stories decades ago,” says Mirchandani, who is wary of being told that her book is the first of its kind.

“I want other people to see that all traditions and cultures can bring so much joy — just immerse yourself in a different culture and don’t be afraid of it,” said Hatam.

Her sentiment really resonated with me — as someone who grew up in a Sikh family, a lot of media depictions I saw of Sikh men were hugely caricatured. The men would be boisterous, loud or larger-than-life. But after 9/11, the depiction of Sikh men with turbans changed. They started being viewed as someone to be feared.

“I think as an Iranian, people think wherever I come from is scary. And I always feel judged about that. And I want to show in this book that we’re not scary because of the color of our skin and what we’re wearing on our head. It’s actually quite beautiful,” said Hatam.

You can order”Hair Twins” from Little, Brown and Company and keep up with Raakhee Mirchandani’s work here and Holly Hatam’s work here!