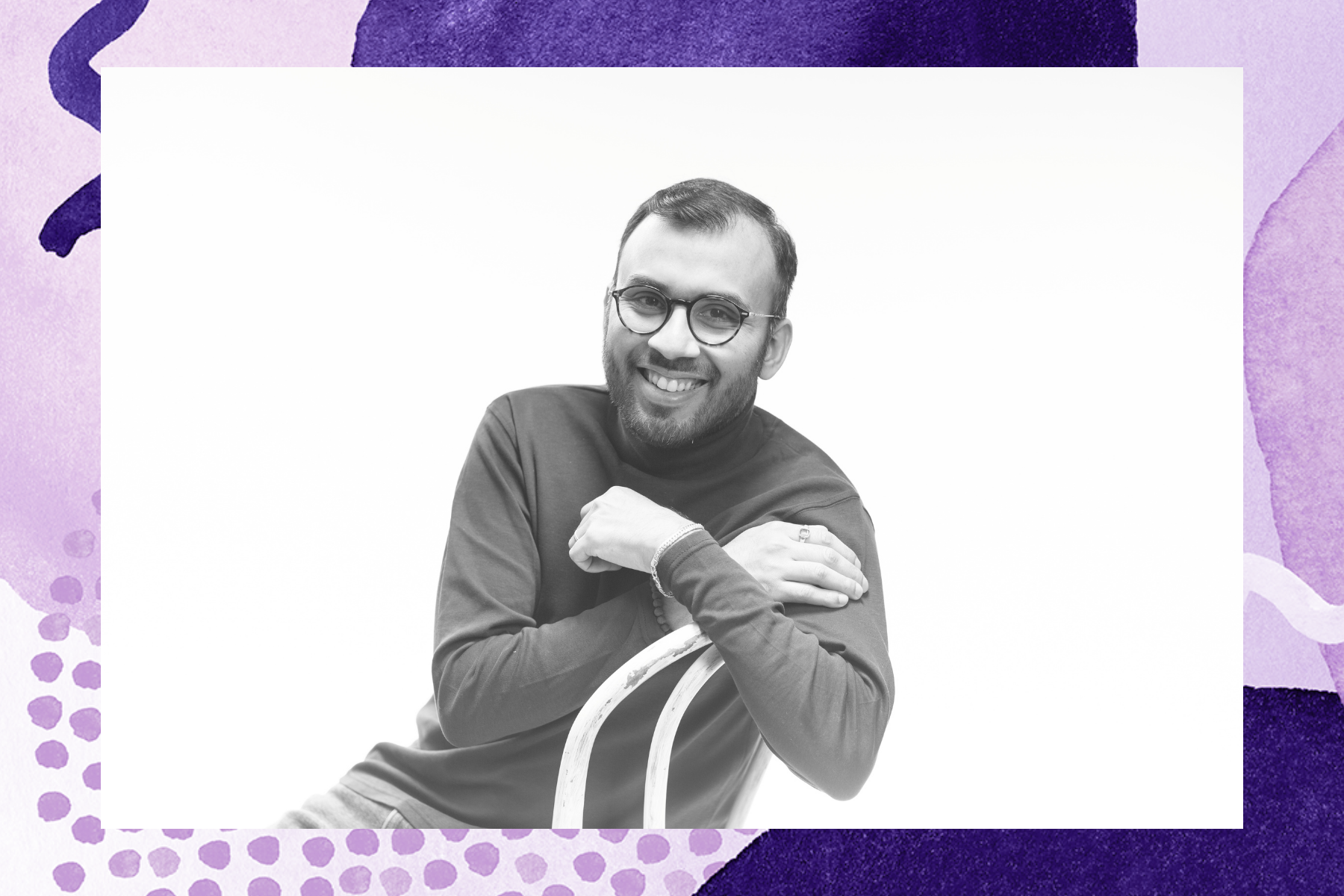 Terms like “cut,” “sync,” and “Fruity Loops,” sound like gibberish or cereal to most non-music professionals. These softwares and concepts often contribute to the rise of songwriters, producers and artists alike.

Gone are the days of  catch-all terms being used in an effort to make creative’s  multitudes consumable and minimal. It’s time for the masses to learn what it means to make sound.

Manon Dave is one such producer, songwriter, and technologist whose story has more nuance than a single term can capture, but a journey worth the context. From a train ride that changed his life to the power of making music and technology, I had a mid-pandemic chat with 7Wallace’s Manon Dave. Get comfortable and take notes.

How did you begin deconstructing your sound?

“I still haven’t really figured out where music-making came from, like, it hasn’t really been around in my family. I grew up here in London, but always traveled back to India every year with the family, and was kind of exposed to more, I guess what I would call more, intricate music versus what was going on, you know, in the “West.”

I had this babysitter who would come around and literally just play hip-hop all day. So she would just listen to Tupac and Biggie. I think unknowingly, you know, I was just developing an ear for song structure through things like that.

I can neither confirm nor deny how many viruses I gave my parent’s computer from using Limewire when I was 10-12, around the same time you’re 16 and discover FL studio. What changes?

“Yeah, so actually, I only ever came across the magical Logic and Cubase at school, I had a super cheap kind of beat-up computer that I managed to find something called FL Studio on, it was known as Fruity Loops at the time, which is a funny name. And so I started using that. Like, that’s when I fully understood the mechanism of creating sound. Basically, that was the first time I thought, holy crap, this actually sounds okay. And I need to make music with this.

I went to Kingston University, I told my dad I really wanted to do audio engineering, or whatever. I did something that I was still passionate about: Software Engineering. Myspace was kicking off, and I ended up working with an artist I met there. Once she got signed, I produced and co-wrote a bunch of her music. That’s when I started to really kind of get under the skin of the music industry and understand more about what I’d got myself into.”

…And that’s all while you’re still in school. Distribution and publishing are fairly convoluted and hard for new artists to grasp. You were thrilled to make a song, but when did the money come?

“I flew out after finishing my final year exams, and I ended up finishing one of the songs that they liked. It was my first ever time in a major studio. At that time, I remember learning and learning. I remember being super excited that there was this potential. You know, a few thousand dollars was the most I’d ever seen at the time, but it felt like there was more of a career to build.

Lack of knowledge and legal representation is often associated with vocalists losing their music, but producers and songwriters are equally as impacted, tell us about that.

“An extremely popular show which we won’t name had brought me on and I received several sync placements over several seasons. I was getting what felt like  a lot of money for me. But, no publishing, so I was getting really screwed over, and just didn’t realize what was going on. I’d signed away my rights too, so there was nothing that they could collect on the back end, which I just didn’t understand at the time was quite crazy.

I ended up going into the ad tech industry as a product developer. This friend of mine,  who was an independent film director, called me on day and said, “Hey, dude, I’m actually on another job. filming a documentary about this Indian composer dude, AR Rahman and your name came up, and he really wants to meet you.”

That was the biggest name I’d heard. Mind blowing. Lo and behold, I showed up to this house and there was AR Rahman. He was there finishing Slumdog Millionaire, and had heard some of my music that I had been working on, you know, within the TV and film space. He found out that I was Indian, and he’s super keen to help talent from that part of the world. That kind of really changed the trajectory of what I saw myself doing in music, because all of a sudden, that day, we were in a session with him and a guy named PJ Morton.”

“He was working on another film at the time called “Couples Retreat” with Vince Vaughn and Russell Brand. PJ largely wrote the song that was on the end credits. AR flew me out to India where he was working with Sonu Nigam on an Aamir Khan film, and I sat in on those sessions. Mostly, I just shadowed and watched the process and tried to contribute where I could. What I felt at the time was like, why am I even here? This wasn’t just education, it was like education with the masters.”

What was the first song you got songwriting credit on and was it in English?

“My first big, big, big cut was probably 2017. After 10 years of just mulling around and educating myself and working with really cool people, I found my way into a kind of parallel day job career of music technology. I worked for a company called Native Instruments, and then later with a company called ROLI, where I built and designed some of the products that producers like me use. I met will.i.am from the Black Eyed Peas because I went to go and demo one of my products to him. All of a sudden, he had me whip out my laptop and play him a bunch of beats, and then he just had me stick around. We did like 7 or 8  songs, along with my friends, PARISI. One of the songs became a single, which is called “FIYAH.” Between him and AR, I would really say that those are the two mentors I’ve had in the industry, and we continue to work with each other at various capacities.”

You advocate for having multiple musical touchpoints and not staying in one lane. Why is that?

“I got to a point where I was in music tech, and I started to realize that people inside the music industry wanted to find ways to diversify what they do. I found that actually spending time with people like Will made me realize that you should just own it. Like, I was super into technology and making music too. So the way I look at it is that I’m a maker, and I just need to keep making. It doesn’t really matter where it is, as long as it’s stuff that I’m happy about.”

You don’t really have to be any one thing. You can be all of the things.

“Definitely. I think that people are so tied to this idea that we need to be or present one thing and cannot be multiple, or you cannot turn multiple things into a career. Everything somehow becomes one passion project, but I don’t really subscribe to that ideology. You’re working as a technologist, so how does that happen while you sign with one of the coolest labels? 7Wallace? YEAH, do it ALL!”

Your recent deal with 7Wallace represents the merging of large and small structures, film and tv, as well as soundscapes…

“I signed the deal itself in December 2020, so that just happened. I got involved with 7Wallace through an artist that I sort of discovered one night watching Colors Studio on YouTube: a guy called Che Lingo. He’s from the UK. He was releasing an EP at the time; we worked on some of those tracks together. And then he kindly asked me to exec produce his album. He was actually the person that was noticed first by the label and Rachel who runs 7Wallace. They signed him for his album project, “The Worst Generation” and that’s how I kind of got to work with them. That was in 2018 and now I’m here, signed to Idris Elba’s label!”

It’s strange how small the world becomes when you find a way to do something you love. What’s a record you wish got more love?

“So I did a song with a friend of mine, an amazing producer called Tushar Apte. One of the world’s best right now actually. We did a song called “Heavy” with PJ Morton, Adam Levine and James Valentine, all from Maroon 5. I was in love with the song and I was in love with the moment that it was in our careers, in our lives. I loved seeing the reaction of people jamming out to it when it was performed live at the Maroon 5 gigs as well. And then, for some reason, it never really felt like it was such a big deal that Adam Levine was on this song with PJ Morton. I still think it’s a big deal.”

The type of music you’re able to create & the way you’re able to approach a project change if your needs are met. It is very different from what you say yes to when you have no choice.

“It’s a sense of wellness. I think people talk a lot about wellness, but I really think of it very holistically. A lot of the time you can be extremely healthy and fit and all the rest of it is right. But it might just be money, like financial wellness. Maybe it’s just connecting with somebody on something. There’s so many of us that have side hustles that we’re in love with, which could be a day job. But I think a lot of it comes down to not hating your day job, and actually making it something that you’re passionate about.”

The world of production has long changed from hearing raindrops on the train to simulating sounds in GarageBand. The tools at our fingertips are endless, from Fruity Loops to Ableton and Splice alike. The making of music has changed because of technology, because of people like Manon Dave. Enveloped by sound are the artists that live in the in-between, the ones who have an understanding of each part of music and sew it together as though it were a garment waiting to be made and eventually amass a discography riddled with love and life experience. Manon is set to create incredible new music with Idris Elba’s new label venture, 7Wallace, a joint venture with Universal Music Publishing Group.

Manon’s story has just begun and requires several interviews to tell in its entirety. As he embarks on new ventures at the intersection of music and tech, he’s relishing time with his son and continuing to elevate South Asian talent by supporting AR Rahman’s KM Music Conservatory, an endeavour to increase access to music education in India. Stay tuned here.