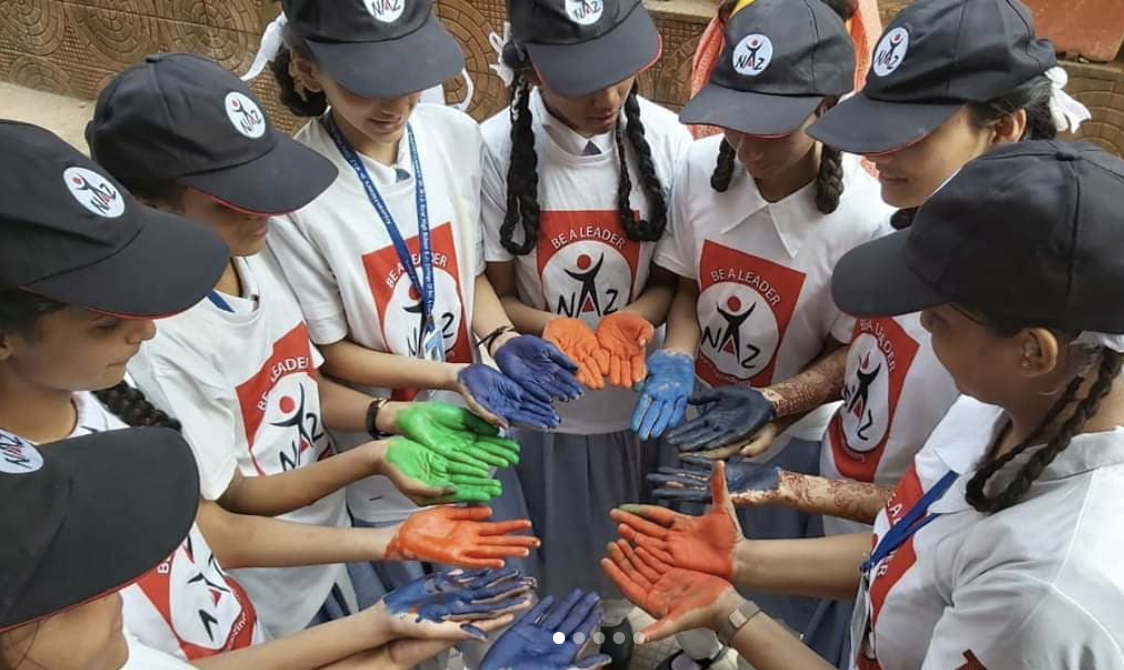 When you first lay eyes on Anjali, she cuts a familiar figure — curly hair, heavily kohled eyes, a pastel salwar kameez — there is a kindness and familiarity about her. It’s hard to imagine any sharp edges hidden in her. It doesn’t take long once you get to know her to realize you’ve got her all wrong. Anjali Gopalan, despite her outer appearance, is in fact forged of tempered steel. The founder of the Naz Foundation (India) Trust and one of the country’s most vocal activists, Anjali has been in the vanguard of the fight for LGBTQIA+ rights in India for more than three decades.

Anjali fell into her lifelong passion while working with undocumented migrant workers from Haiti and Latin America while studying abroad in the United States. It was there that she first became aware of HIV and the devastating realities of those living with, and often dying from, this new and frightening disease.

“HIV changes you as a person – how you think and respond. You question yourself, your culture and your morality.”

Anjali returned to India in the late eighties to a society divided by extreme wealth, class inequality and the caste system. At the time, HIV in India was something only spoken about in whispers. Anjali began working with orphans with HIV, the children of young mothers who had been claimed by the disease. But as she became more involved, she found herself called to advocate for another group who needed her voice— young gay men whose families had disowned them.

“I started counseling the families of gay men who came to ask me for medication to change how they were feeling. It’s when I really started to see the cultural paradigm shift that needed to happen in our society.”

To Anjali, one of the great challenges of Indian society is that of constant internal struggle. Our public self and our private self (perhaps our most authentic self) are constantly at odds.

“We are excellent at living parallel lives,” Anjali says against the backdrop of howling monkeys at the nature preserve she runs for abandoned and abused animals.

“We live one life for ourselves and one for society. We have two identities in India — our deepest, truest identity that only we know, and one for our family, friends, and community. That’s usually the one we nurture and pour into. After many years, I’m still shocked when I counsel families. Many parents have accepted their children’s homosexuality in private but still want them to be heterosexual in public and have heterosexual marriages and children. It’s theatre for society.”

Some form of social theatre is something many of us within South Asian communities are familiar with. Our deep networks of family, friends and peers are both a blessing and can be an obstacle to living as our most authentic selves. In a society that cares deeply about the perceptions and opinions of those in our social networks, it’s no surprise that the families of young people within the LGBTQIA+ community would be willing to bolster a lie with infidelity rather than let their social circles know the truth.

But Anjali is encouraged by the attitudes of Millennials and Gen-Z. For her, the challenge hasn’t been about changing a billion minds. It’s about changing two billion — the public and the private mind, and younger generations are leading the way.

“I think young people in this country are forcing us to look at ourselves and our morality. It’s high time we started holding each other accountable for our views.”

Anjali’s work for LGBTQIA+ rights in India illustrates that real progress and cultural change are slow. But there is hope. In 2018, after a lengthy battle in the courts, the Supreme Court of India declared section 377 of the Indian Penal Code (an archaically worded piece of legislation and legacy of colonization that made illegal any “unnatural offences, or sexual activities considered against the order of nature”) unconstitutional.

“The turning point for me was when a young man was brought to me after receiving shock therapy from a publicly funded hospital. The next day I went to the National Human Rights Commission to file a complaint and that’s when I learned about Section 377 and the myriad of ways it abuses LGBTQIA+ people through corruption and bribery. We used HIV prevention as an argument to ask for a watering down of the wording of Section 377 and that set an 18-year battle in motion. We were thrown out of the Delhi High Court; we bounced between the Supreme Court and the High Court. In 2009, we had a case that set a precedent for decriminalizing homosexuality. When that happened, there was such euphoria in the country. Many people believed it was the start of real change, but the battle continued for another decade until a group of petitioners challenged the Supreme Court to decriminalize homosexuality for good.”

But Anjali is quick to caution that although this is a victory, there is still a lot of work to be done.

“At this stage, the conversation is about decriminalization. It shouldn’t be confused with rights. Gay people are simply protected from criminal prosecution under the law and this protection does not extend to trans people, intersex groups or hijras (eunuchs) that have long held a place in religion. If we don’t have anti-discrimination laws that extend to all groups, we cannot say that the LGBTQIA+ community has their rights. For us (the Naz Foundation), we have always approached this battle from the perspective of HIV prevention. It makes sense for those that are vulnerable and for the community as well. But, in a country as diverse as ours, we need to build community before we can change minds.”

The court of public opinion in the wider South Asian community is perhaps on many levels just as powerful if not more influential than the law itself. As India contends with increasing right-wing sentiment and growing Hindu nationalism, public opinion on matters of LGBTQIA+ rights will become more divisive and subject to more public scrutiny.

Anjali’s off-piste fight for equality is illustrative of the long process that changing minds and shifting culture can be. Living two lives, as so many of us do, is in of itself a systemic barrier to change and makes it difficult to achieve and harder to maintain. Anjali’s story reminds me that no matter how much we think of ourselves as activists (and to an extent, all of us of a certain generation are keyboard warriors, making our opinions heard), these fights have been fought for a long time.

Anjali embraced her internal persona of an activist, and it allowed her to influence culture and the law. As our conversation unfolds, I feel an intergenerational kinship with her. It’s like the need to present myself in a certain way or “be on” simply melts away. Then again, it’s no surprise that you would feel comfortable and accepted in her presence. Anjali has dedicated her life to helping millions find the courage to be who they are in a culture that won’t accept them. Her story is a proverbial nudge to all of us to blur the lines between our inner and outer selves and give voice to both parts. The ability to live honestly is one of the greatest gifts we can give ourselves and our community. Through Anjali, I am reminded that there is power in living authentically because an authentic voice lived publicly speaks twice as loud.

Anjali Gopalan is the Founder and Executive Director of The Naz Foundation (India) Trust, a Delhi-based NGO dedicated to fighting HIV/AIDS. As a strong advocate for the sexual health and rights of the LGBTQIA+ community, she spearheaded an eight-year legal battle against Section 377 of the Indian Penal Code (IPC). Anjali is an environmentalist and an animal lover. She believes that animals have the right to a cruelty-free life. Driven by this passion. Anjali established an animal sanctuary,

All Creatures Great and Small at Silakhari, Harayana.

Anjali has received numerous awards and recognition for her work. In 2005 she was short-listed for a Nobel Peace Prize and in 2012 was named one of Time Magazine’s 100 Most Influential People in the World for her pioneering work advancing gender rights, sexual health-related to HIV/AIDS, and care for HIV positive orphans and in 2019 former Indian Prime Minister Manmohan Singh awarded Anjali the Changemaker of the Year award for her legal battle in decriminalizing homosexuality.

Poorva Misra-Miller is a Canadian Indian third culture kid, podcaster, and digital marketer who left a life that no longer fit to tell stories from the sunny shores of Costa Rica. The founder of Women in Our Town and the host of the Unsilent Women podcast, Poorva believes that storytelling is the greatest arrow we have in our proverbial quiver. After nearly a decade in the corporate world and tired of leaning in, Poorva did what any millennial living through a global pandemic would do. She packed her bags and headed to the beach. Growing up in Asia, the United States, and Europe, Poorva moved to Canada where she graduated from the University of Toronto. A skilled marketer and communicator, Poorva’s industry experience runs the gamut from three-person start-up launching out of an incubator to giant multinational professional services firms to Canada’s biggest law firms and everything in between. Poorva’s latest project, Women in Our Town, is an online platform for unsilent women. Her work focuses on gender, race, and pop culture with the aim of amplifying BIPOC voices. Today, Poorva has interviewed women from around the world including activists, artists, writers, athletes, and entrepreneurs. Women in Our Town is a space for thoughtful feminist critique, liberating conversations, and a place for women to carve their niche in the world with their health and well-being intact.