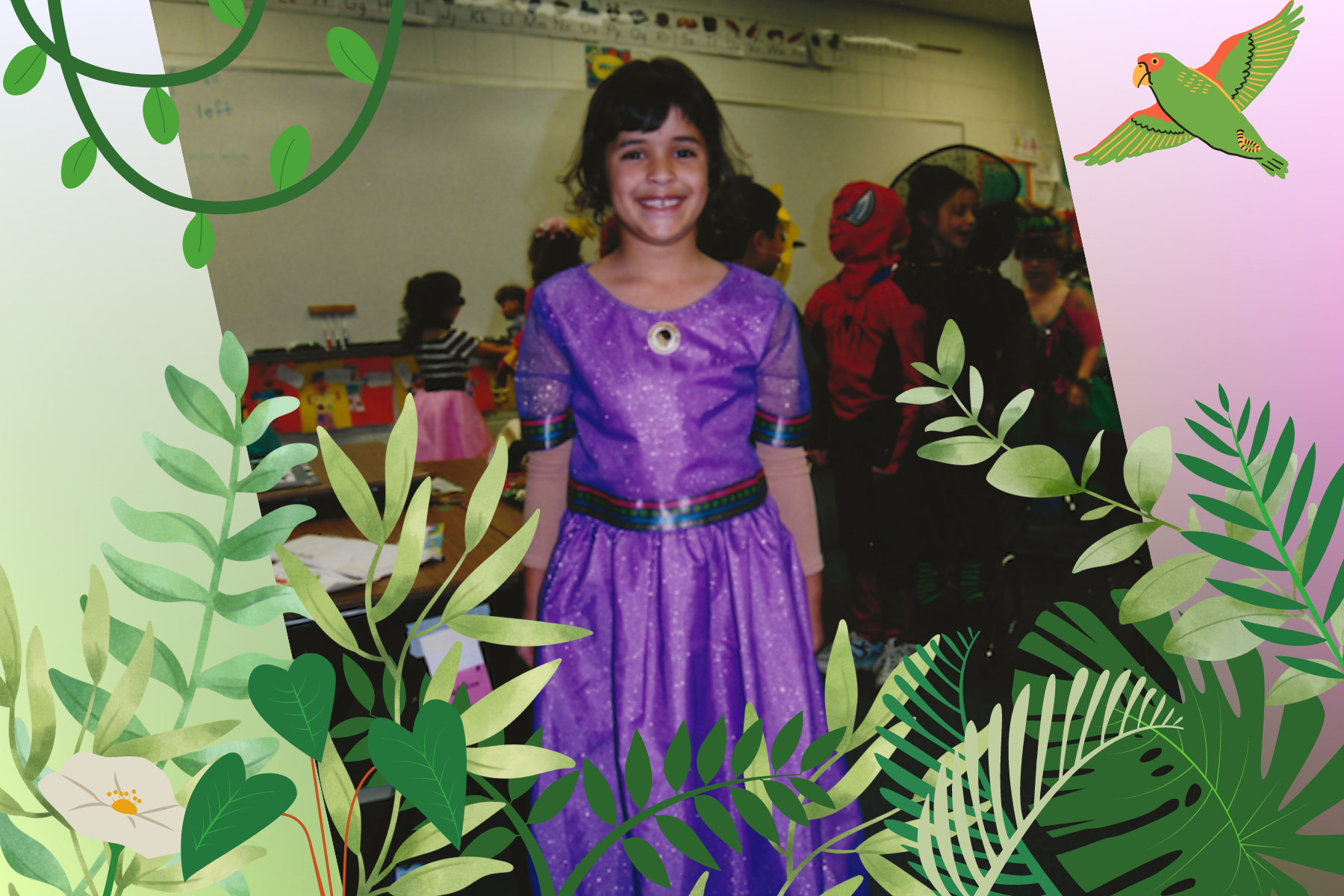 The poet as a young child, in her Shanti costume. Photo credit: Madeline Bhaskar

Somewhere within Walt Disney Animation Studios’ spew of unwanted straight-to-DVD sequels in the early 2000s, “Jungle Book 2“ came out. While it wasn’t a critics’ darling, it gave me Shanti. Shanti was seen in the first “Jungle Book” film as the girl that led Mogli back to the “man village.” However, in “Jungle Book 2,” she was the main female lead. I didn’t know it at the time, but Shanti was the first female Indian character that I had seen on screen.

As a kid, I scanned the toy aisle looking for dolls with my same complexion, only to settle on Barbie’s brunette friend. With Shanti, I didn’t have to compromise. At the same time, I am mixed race (half-Indian, half-white), so Shanti would look like me but only reflect half of my identity. When Halloween came around, I jumped at the chance to be Shanti. As I donned my shimmery purple outfit, Shanti’s bindi felt foreign to me. My close Indian relatives did not wear bindis, so my red Sharpie “bindi” felt like it belonged to Shanti more than myself. Looking back, I realized that the tension between what I can and cannot identify with began at an early age.

My love for Shanti culminated with my hunt for her McDonald’s toy. After my failed attempts at securing her toy via a Happy Meal, I resorted to making my own Shanti doll. My pathetic attempt at making my own doll moved my dad so much that he went out and bought the Shanti McDonald’s toy. He still keeps my paper doll in his wallet. Even with my complex relationship with my identity, I still love Shanti and will petition to make her a Disney princess.

[Read Related: Disney’s ‘Aladdin’-Diving Into a Tale of American Orientalism]

For me, characters could not be claimed
Parts belonged to me but never the whole
She was my unexplored half
Unclear if I had the right to plant my flag

McDonalds trips to find her happy toy
Met with leftover Baloos and Mowglis
My remedy was a blue construction paper circle
Punctuated with a Crayola marker bindi
My father glanced at her, and bought me the toy anyway

My love for Shanti lives in
Wishing to see myself tangled in vines, taming tigers
Wanting to be like you

Worthy of a story
She dances
Uninhibited and unrelenting

[Read Related: ‘Spin’ is the Disney Channel Original Movie Helping Create the 2021 We Want to See]

Growing up, Madeline always lived within a mile of a cornfield. Being half-Indian and half-white, she found herself in challenging and humorous situations, navigating the space between being too Indian or too white. Whether it was strangers assuming she spoke Spanish because she “looked Latina” or a classmate claiming that her mother was “too white” to be related, Madeline has been fascinated with the concept of identity. In her writing, she explores the moments that define who we become and how we see ourselves.