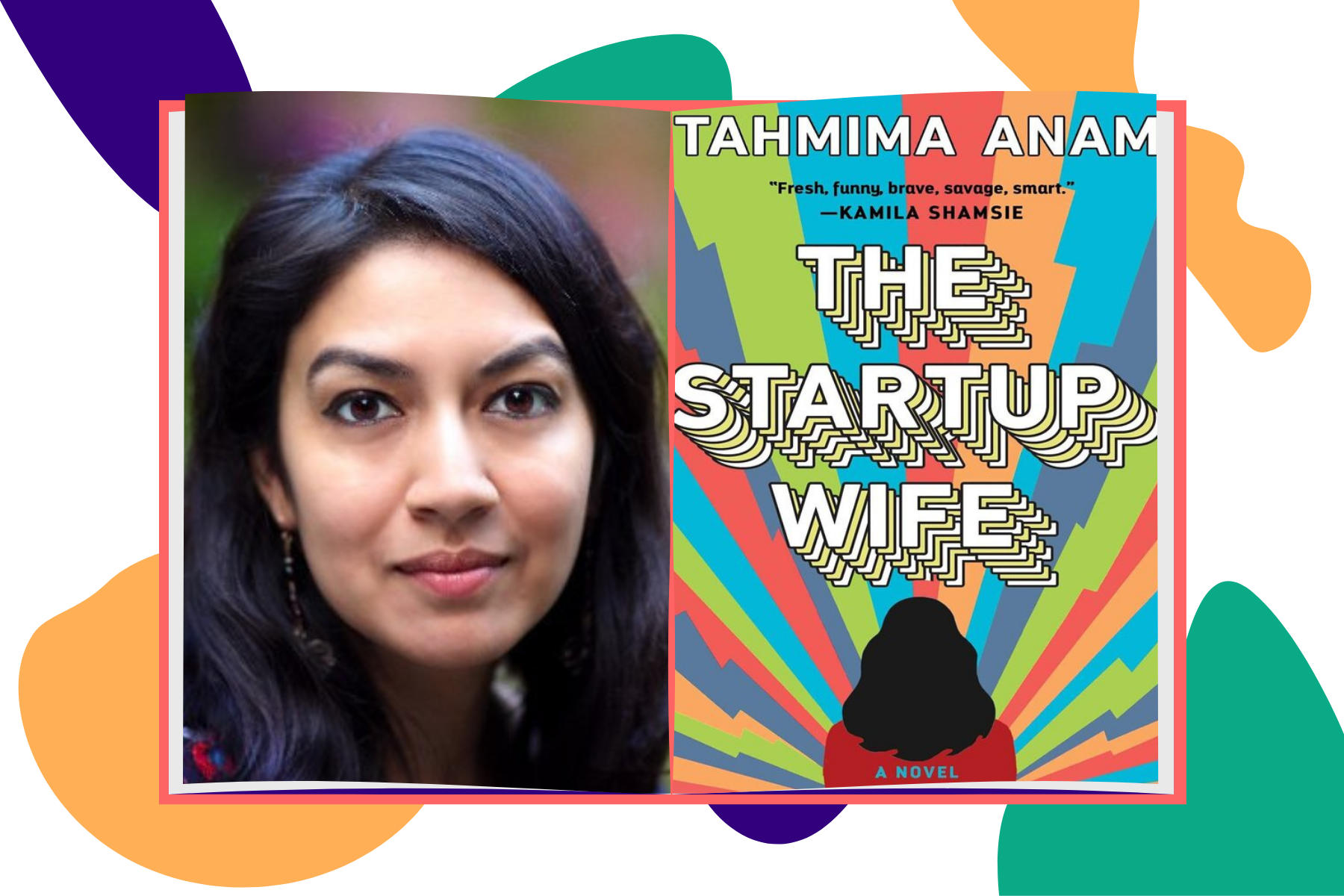 I still remember the bubbling enthusiasm I had when I started watching “Silicon Valley” and “Zoey’s Extraordinary Playlist.” I sat on the couch, popcorn at the ready, and hit play. I had incorrectly assumed that because both narratives were placed in the world of the San Francisco technology hub, where arguably MANY South Asians work, I would finally get to see a version of myself on the big screen. Sitting in my cramped NYC apartment having just finished my day job as a data strategist, I had child-like wanderlust for these tech-related shows. I let Netflix run from episode to episode, without pausing, but all I saw was:

The plots were intriguing, the characters entertaining, but I was waiting to be represented… Still.

Enter Tahmima Anam and her book “Startup Wife” about a brilliant, married coder named Asha Ray. The juxtaposed title captivated me and I realized I hadn’t come across a book about a fictional tech startup co-founded by a couple, let alone a South Asian female.

A Ph.D. researcher at MIT, Asha Ray is captivated by reverse-engineering the brain, however, she finds herself being tugged into a romantic relationship with a high school crush, Cyrus Jones. Cyrus is a charismatic and well-read soothsayer who performs customized rituals on a consultative basis. Asha and Cyrus meet as Cyrus is conducting a customized funeral ceremony for a mutual English teacher by incorporating Shakespeare into the agenda.

Cyrus and his trusted friend, Julian, quickly become Asha’s closest confidants, and within two months, Asha finds herself married to Cyrus. Then, Asha comes up with an idea to code the knowledge from Cyrus’s brain about rituals, culture, and religions to automate customized ritual building in an effort to create communities that care about the same things. A sort of secular “religion”, these groups could find comfort in one another through the community platform they built, WAI (We are Infinite). Asha quits her Ph.D. program, and the trio moves to NYC to join an incubator with an apocalyptic mindset. At first resistant to monetizing something so pure as meaningful relationships, Cyrus is quick to jump into the startup world as the CEO of the company, surprising Asha and Julian.

In going through the process of securing investors, updating the platform, and eventually selling the product, Asha is exposed to the hustle of startup culture and contends with her seat at the table, her marriage and her career. Anam comments:

“I wanted the story to be told from Asha’s point of view — an outsider in every way. She’s an immigrant, she’s a woman, she’s a POC — not at all like most of the people you see represented in books or films about the tech world. And even though Asha is super smart and brimming with confidence, you see how she struggles with the limitations of the workplace, how it tries continually to contain and limit her potential. These are the stories we need to hear more about.”

Working together and married, Asha battles with her new role of “wife” while navigating her professional life. Asha says: “Mrs. Jones kept me up at night. She was my shadow self, a laundry doing, husband-pleasing ordinary person who wanted nothing more than to be an excellent wife.” A feeling I’m sure most women can contend with, the seeming identity change that is bestowed upon you when you get married is overwhelming, if not unjust. An identity change is the first embers of imposter syndrome that we see in Asha, and it is completely unrelated to her life as a coder. However, we begin to see the honeymoon phase of Asha’s relationship fizzle out, especially as things pick up with the company and heavier decisions are made.

Anam herself is married to a tech founder and often wonders what her role would have played in such an environment. Now, Anam works on the board of ROLI, the company her husband founded. When asked about insight into characterizing Asha’s imposter syndrome and mixing business with her marriage, Anam responds:

“I definitely did not need to do any research in order to write about imposter syndrome! I’ve had it so much throughout my life — as a graduate student at Harvard, as a writer from Bangladesh trying to get published. Imposter syndrome is why Asha doesn’t take her rightful place at the helm of WAI, and instead pushes Cyrus to become CEO.

I’ve learned that it’s exciting to mix business with marriage — it’s fun to go on that journey together, and I really enjoyed getting to learn so much about the business. But it’s also hard to create any boundaries between work and home, and the lines definitely got really blurred sometimes. After ten years, we’ve finally made some rules! The first one is: Never talk about work in the bedroom.”

All the while, Anam tastefully introduces us to Asha’s mentality as a child of immigrants in subtle, yet surprising ways. At one point she admits: “I’m ashamed of taking money from Jules, which is, in fact, money from his dad. There’s a detailed internal monologue in my head about how I’m just another immigrant leech, another drain on the system.”

The narrative from a young age doesn’t escape Asha, despite moving away from her parents and surrounding herself with different people. Many immigrants have to spend a better part of their adulthood unlearning the detrimental narrative that to be in America is a gift that should be repaid, and this mentality, in essence, breeds workaholics, which, at points, can feed into the problematic “model minority” tale.

At the same time, Asha reckons with the privilege that came in growing up with her parents who safeguarded her and took care of her. One of Asha’s friends at the incubator delves into her background and how she was a professional stripper because there was nowhere in the world she could go: “I can’t help but think of all the ways this could never have been me. My mother had told me there were always uncles and cousins around when she was growing up, and it wasn’t unusual to be touched or pinched in a way that felt wrong but was always covered up with a laugh. ‘I will never let anything like that happen to you and your sister.'” These internal dialogues show growth in an honest way, and I’m left yearning to hear more of Asha’s thoughts to reconcile my own.

Asha effortlessly portrays herself as the steadfast South Asian woman in search of her story and her cause. She emboldens the ideal of the young, passionate and smart Asian American; a relatable thinker and trailblazer whose several identities only strengthen her character.

“I wanted Asha’s heritage and her racial/cultural identity to be an important part of her identity, but not the sole driver of her character. She’s a scientist, she’s an engineer and an inventor, and being the daughter of a Bengali immigrant is one among many strands. Asha, like the rest of us, contains multitudes, and I wanted to celebrate that.”

When I asked Anam about how she decided to portray Asha’s parents and Bengali culture, she mentioned:

“One of the cliches I really wanted to avoid was the marriage-crazed south asian mother figure — you know, the one who pressures her daughter to have an arranged marriage, and who frets/freaks out when her daughter marries a white man. Those tropes are often based in reality, but I wanted Asha’s family to take a different approach — they’re artists and they want their daughters to be free to make their own choices. It’s Asha who thinks about Cyrus’s whiteness, who wonders what it might have been like to be with someone who might understand certain things about where she’s from. When it comes to the workplace, as power dynamics come into play, the interracial relationship takes on a new dimension.”

Anam decided to focus on Asha’s growth in her life as opposed to bringing parental feuds to the limelight. Hence, Asha’s parents did not throw tantrums at her quick and untraditional marriage to Cyrus, as much as I would have thought that to be an arc in the plot. In reading the scenes with Asha’s parents, I noticed that the emotion I focused on was being glad that her parents respected the choice she made for herself rather than unnecessarily exert parental authority to challenge her, which was refreshing.

The title “Startup Wife” and everything the book stands for makes me smile (giddily might I add). Poetically written, in an unchronological fashion at times, Tahmima Anam has successfully introduced a new class of books; A world where the South Asian, female protagonist is not plagued by the problems of identity in relation to parental demands, or sociopolitical circumstances, but rather the qualms that come with the privilege to be able to focus on work and education. In regards to Anam’s future work, I am a true fan of her perspectives and optimistic about the stories she will share.