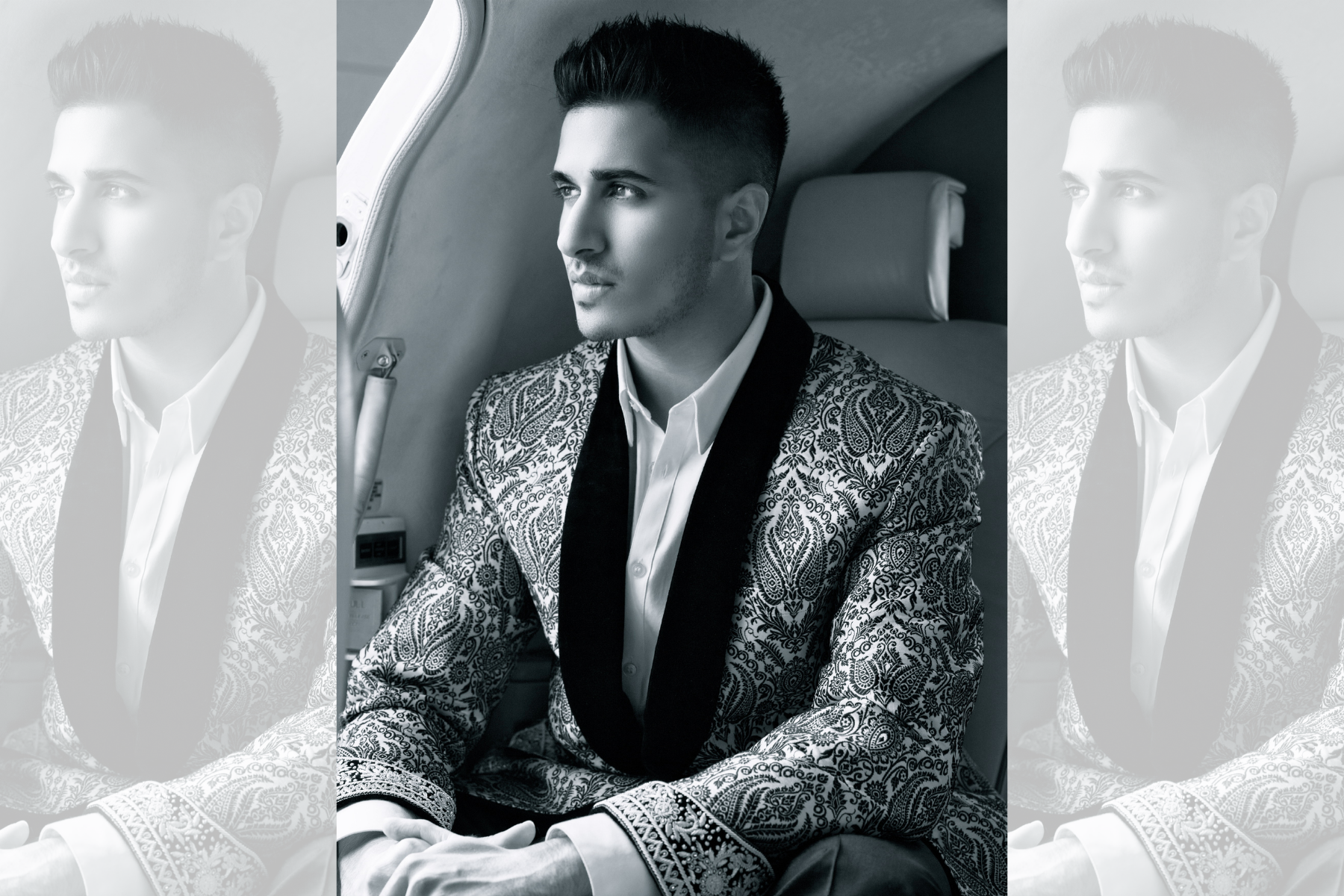 From soulful experiences full of aching love to party-rock anthems, Arjun is a versatile artist and an icon. He is an R&B singer-songwriter, record producer and multi-instrumentalist born in Colombo, Sri Lanka and raised in London, United Kingdom. He has a truly international fan base and has performed for fans all over the world touching six continents. Notable accomplishments include performing at London’s renowned Wembley Arena, NYC’s Times Square, live acoustic sessions on BBC Radio 1, ICC Cricket World Cup 2012 and many more. I got the incredible opportunity to interview him over a Zoom call where we talked about the beginnings of his career, the meanings behind his music, the future of artists and so much more.

Arjun started his career off by self-producing his first single “Remember Tonight” while he was an unsigned artist. This was the first time he got any attention from the U.K. music industry, and he let me in on the inspiration behind the song.

“The song was about a relationship ending. It wasn’t actually a true story, but it was just based on a scenario I imagined.”

It was amazing to see an artist like Arjun talk so candidly about the start of his music career. He openly talked about feeling anxious during his first video shoots and feeling awkward watching himself on video. Arjun has evolved from the start of his career as you can see the confidence radiate through the screen in his music videos.

Arjun followed up with another single called “Stargazer” featuring fellow artist Raxstar. He filled me in on the meaning behind this song: the struggles of being an artist, trying to enter the spotlight, but also trying to balance out his personal life.

“Stargazer was a true story about balancing a relationship while trying to launch a musical career. You must constantly hustle and grind to promote yourself. The song is talking about an artist trying to make it but also trying not to leave their 9/5 job.”

Arjun reflected on his past and further elaborated what the first few years were like being an artist. Being an unsigned artist had its perks as Arjun had full creative control over his work.

“I think most artists will say that the first initial few years of their career are the most fun because it’s a whole new experience.”

One of Arjun’s first biggest hits came from his English R&B Remix of “Why This Kolaveri Di.” Being half Tamil, the song was a tribute to his roots. Growing up, it was natural for Arjun to hear Bollywood, Bhangra, hip-hop and R&B at the same house party. The remix is a culmination of his influences.

Arjun’s musical journey started with bedroom covers, mashups and remixes of popular songs. During the height of the pandemic in 2020, he created new bedrooms and kitchen covers filling us with nostalgia. The formulas for these covers were a hit as he was one of the first U.K.-Asian artists to sign a deal with T-Series in 2014 when he elevated his game with bigger productions, proper videos, larger marketing budgets and so much more. This took him to the next level in terms of having just a fan following to a larger mass appeal. T-series is the biggest Indian music label, has contacts all around the world and can reach audiences further than many other labels.

In 2017, Arjun signed a deal with Island Def Jam, a U.K. and U.S. label, whose parent company is Universal Music Group. This was a massive achievement for him as very few South Asian artists including Jay Sean and Raghav had signed a deal like this. Arjun continued to talk to me about his love for ‘90s old school R&B music and how artists like Craig David inspired him to make the music he wanted to make.

I loved hearing Arjun’s insight into the music industry and how he encourages the merging of cultures. He predicts that there will be a time where South Asian music will be trending in the western mainstream. He understands that South Asian sounds and languages are a little bit hard to digest initially for a Western mainstream audience, but with the right marketing, the right amount of push and a cosign, the music can still work. I decided to take Arjun’s advice and share a bass guitar cover from my YouTube Channel which encompasses a couple of my musical influences.

Arjun has been in the music industry for over 10 years now and it only feels like yesterday when I first found his videos on YouTube. As he came from the generation of iTunes downloads and CDs, I got the chance to ask him how he stays up to date with the current trends in today’s music market.

“Marketing has totally changed and unless you adapt and get with the times, you fade out. The Drake’s and Jay-Z’s found a way to evolve. The gatekeepers to people’s careers now are basically Spotify, Apple Music, JioSaavn for India and other applications [that] use algorithms.”

We continued to discuss how marketing went mobile and applications like TikTok help artists reach further demographics. TikTok dance covers have become a big trend in helping artists gain attention for their songs.

Arjun continued to discuss some notable collaborations with artists like Guru Randhawa on two songs “Same Girl” and “Suit.” “Suit” has been one of the biggest songs Arjun has been involved with regards to traffic as it was put into the movie “Hindi Medium.”

“The song actually didn’t blow up initially. It began to go viral months later because every time a girl got dressed up for a desi wedding, they put the hashtag #SuitSuit. There’s a deep meaning behind the song about being proud to be brown and not being afraid to express your culture.”

Arjun continued to walk me through his process of creating music. He builds storylines and changes descriptions depending on the type of energy he wants to bring into the music. A personal favorite of mine is his “Teri Meri Remix” with lyrics like, “We were made for each other, They should know that love has no colour, why does our race even matter, Why can’t we just be together.” Arjun further elaborated on the meaning behind the song.

“I wrote a song about two people who are from different backgrounds, specifically different races.”

Arjun dropped his first album “Closer to Home” in 2018. It was a big moment for Arjun to be able to sing in English on the album but also have elements of desi fusion. Arjun’s album mode creation process included no traveling, no gigs and very little social life. Once the album was finished, it was back to touring. As Arjun had taken time away to create the album, he appreciated touring much more this time around. Arjun believes that this is the best-produced music he has released in terms of quality and production.

In February 2020, Arjun organized a concert celebrating the life of his late wife, Natasha, who passed away from cardiac arrest. Natasha, lovingly known as Tash, was involved in all aspects of Arjun’s career from being his manager, P.A. and more. Fellow artists such as Mickey Singh, Mumzy Stranger, Raxtar and more knew Tash very well and wanted to do something out of their hearts for her. Arjun organized, planned, marketed, promoted and created partnerships for the concert. The concert had a higher cause and donated £40,000 to a heart charity called C.R.Y. (Cardiac Risk in the Young), for which Arjun is the brand ambassador. This charity helps individuals under 30 get free heart scans and helps with other forms of aid and resources. This concert also deepened his connections with fellow artists and the U.K. media.

Arjun dropped the song “One Last Time” to honor his wife. Natasha was a superhuman who not only managed Arjun’s career but was also a full-time doctor. She would go in and treat patients for hours and be ready to jump on a plane and go tour with Arjun to any destination right after. Arjun’s aim was to create a song to showcase how much of an impact she had on him as well as how much she meant to him and did for him. Arjun describes his experiences in creating this song.

“Feelings are useful for song-writing but when they are so raw and extreme, it’s too much to write. I tried to write about it and would break down.”

He credits his mentor, Sway, a rapper from the U.K., for telling him to start somewhere and helped him get the process started by playing him the initial chord progression. The process of creating this song was hard and healing as Arjun found writing down his emotions about grief to be therapeutic. Arjun hopes this song stands as an everlasting tribute to Natasha.

Arjun is an R&B sensation in his own right, and I will treasure the conversations I had with him. He can keep R&B at the core of his projects and transport his listeners into an emotional experience. Arjun has impacted so many of his fans around the world through the longevity of his career. Arjun left me with this last sentiment.

“We have a unique identity being South Asian but growing up in the West and having a strong connection to our roots. Our music scene is a fusion hybrid growing up on Drake and Arijit Singh. This connects so strongly with the diaspora and strengthens the fusion scene through the collision of cultures.”