Culture Entertainment Identity In the NewsSeptember 27, 2021 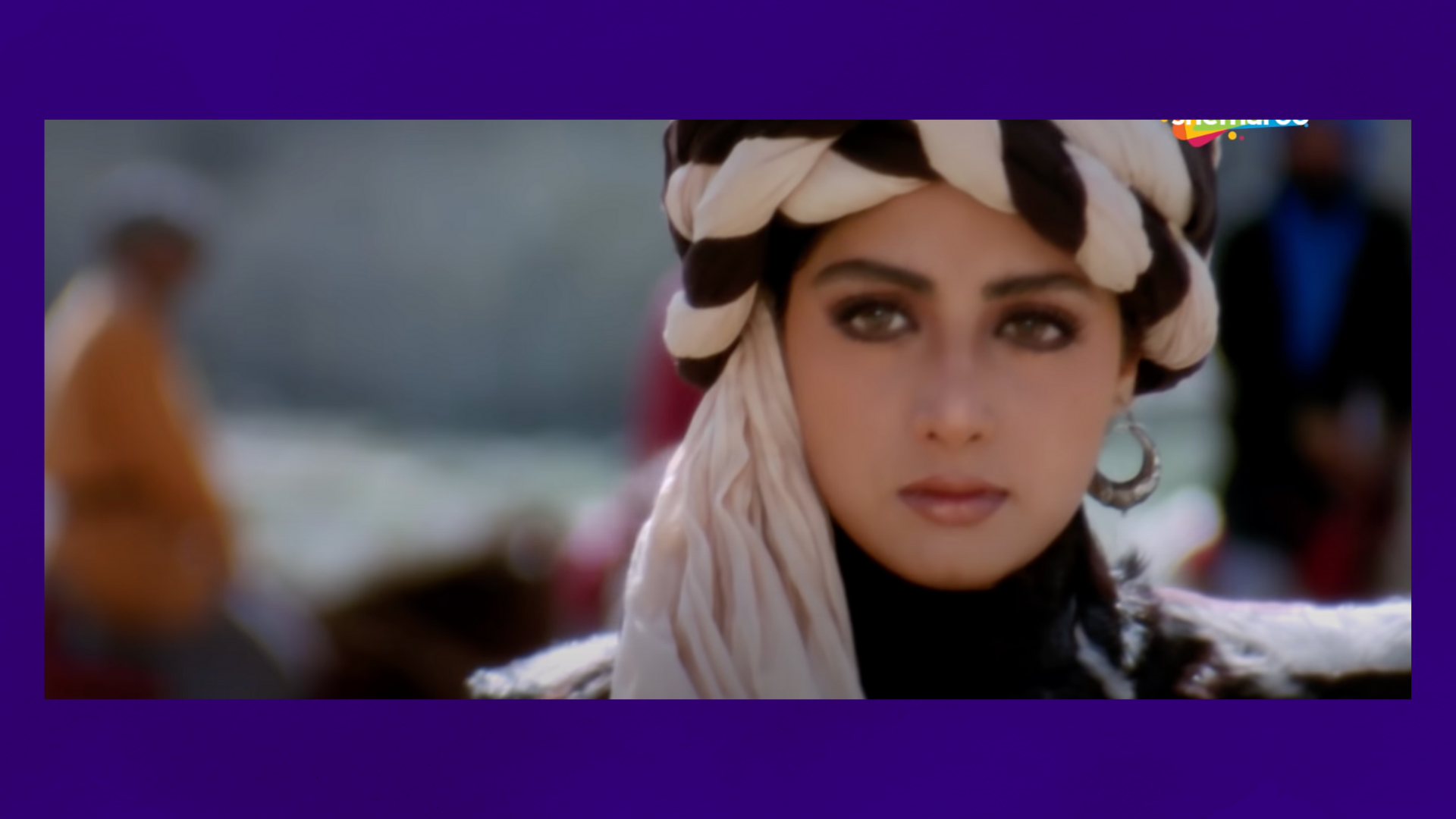 Growing up in India, there was an iconic Bollywood movie released in 1992. It was called Khuda Gawah?—?which translated to “God is my witness.”

It was a one-of-a-kind Indian movie that was shot in Kabul, Mazar-i-Sharif and Kandahar in Afghanistan. The movie celebrated unrequited love, where a proud Afghan, “Badshah Khan,” portrayed by Amitabh Bachchan, was forced to live in India to keep a promise, while his estranged wife lost her sanity obsessing over his return. It was a bitter-sweet movie that glamorized Afghanistan for Indians and made women seem invincible. The female protagonist “Benazir” was a stereotype breaker and was portrayed by late Indian actress, Sridevi.

BBC reported that “It ran to packed houses for 10 weeks in Kabul” when it was released. Khuda Gawah still remains popular in Afghanistan. And even today, the film continues to be in great demand since cinemas reopened in 2001. So much so that in 2018, Afghanistan mourned the death of the late actress Sridevi, who portrayed “Benazir” in this movie.

Perhaps the people of Afghanistan wanted to believe the Bollywood interpretation of their own country and saw their own potential as these characters stood their ground proudly, in their values and loved passionately. Maybe it was the only vicarious outlet available to the Afghan people at the time.

Growing up in India, and living in an ever conflicted situation with our neighbor Pakistan, there was little known about this country on the other side. History taught in the Indian school system detailed the spice routes, the Indus valley civilization and the invasion of Mughals into the Indian subcontinent. And these artifacts over centuries loosely mapped to the land, which is Afghanistan today.

As a young girl, there was mystery, glamour & a painful history all entangled into one knot, that I hadn’t been able to unravel. Until only today, when Kabul has collapsed. Bollywood appeared to be that imaginary bridge that we could safely take to get a peak and satisfy all our curiosities.

In 2006, I had moved to the United States as an immigrant and got my first job out of school in Silicon Valley as a software engineer. I lived in Fremont, California. If you lived in Fremont, you couldn’t miss the Afghan community and how their beautiful culture was infused into the city.

The apartments that we rented were leased out by Afghans. There were restaurants serving delicious Afghani food. You could actually mingle with local Afghanis at the Naz Cinema in Fremont. It was the only theater at the time that showed Bollywood movies.

It was a beautiful secular, cultural scene at this theatre, especially on Fridays. Indians, Afghans and Pakistanis watching Bollywood movies, replete with singing & dancing, melodramatic love scenes and silly humor. These movie halls ran packed. And for just a little bit, we all forgot borders. We forgot religion. We were only there for some good old-fashioned entertainment.

However, there was one specific interaction that left an indelible memory in my mind. I went to get my eyebrows shaped at a local Indian salon. There was an Afghan lady, who worked there. I still remember she was beautiful with graceful features and kind eyes. She must have been my mother’s age.

I often used conversations as a way to distract myself from pain. And as she plucked at my brows one day, I went into the Khuda Gawah glamorous trance from 1992 and blurted out?—?“Your country is just so beautiful. I have seen glimpses of it only in movies. Do you often go back to see your family?”

Her beautiful calm face transformed into utter horror. I had unintentionally touched a raw nerve. She got transported into her past and described the horrors she had witnessed firsthand. And that she would never ever go back. The fear was palpable and unfortunately still in her body, as she relived the trauma due to my unintended probing. She was extremely grateful for her life in the United States of America. As an immigrant from India, I could relate to her gratitude and her version of the American dream, even though it was very different from mine. We bonded over Bollywood movies, spices and standard immigrant woes.

Right around that time, I read the book “A thousand splendid suns” by Khaled Hosseini, after watching the movie?—?“The Kite Runner.” The book detailed the atrocities that Afghans had faced, which was not shown in the movie and also referenced Fremont as a refuge to these Afghans.

[Read Related: Bollywood, You Have Lost Your Magic]

As I grapple with the viral videos on social media today, where Afghanis are hanging onto their American dream literally as they cling onto the airplanes. My heart gets heavy. The images and videos circulating in the jungles of the world wide web crushes that warped Bollywood’s interpretation of Afghanistan. Khaled Hosseini, the above-referenced author is an Afghan refugee himself, whose family sought refuge in California many years ago. His appeal to the American government to save women from the Taliban regime after the recent collapse of Kabul shows how extreme the circumstances are, as he relives the trauma he witnessed as a child growing up in Kabul.

As an immigrant from India here, I know I am relatively privileged. Despite all my immigrant complaints, I know this is a good life. And I was able to choose it with intention. My first-hand interaction with the Afghan woman in Fremont in 2006 as well as notable Afghan Americans like Khaled Hosseini voicing out their grave concerns is proof as to how concerning the situation is in their home country and how important it is for the United States to demonstrate leadership.

These Afghan Americans are now on the other side. And living the good life, called America. But there are so many who are still dreaming of this life and are trapped between the treacherous walls of Afghanistan.

I hope all of us, as first-world or third-world countries, can do the right thing today and help women and children in Afghanistan get to the other side. Because the Bollywood dreamy interpretations of Afghanistan are no longer a possibility. They must continue dreaming and start their lives elsewhere.

Neeta Jain is an Engineer turned Health Coach and an Immigrant woman. Her wellness company, Her Shakti is on a mission to create a safe space for women of immigrant origins and helps them transform into their healthiest and strongest selves. Go from being an overwhelmed busy bee to a nourished goddess with her free tips. Her Shakti has a community of 1500+ women and has empowered women across notable companies including Google, Amazon and Facebook. Neeta completed her Masters in Computer Science from the University of Delaware and worked as a technologist for 13 years until she found her passion in empowering immigrant women to live their healthiest and happiest versions.