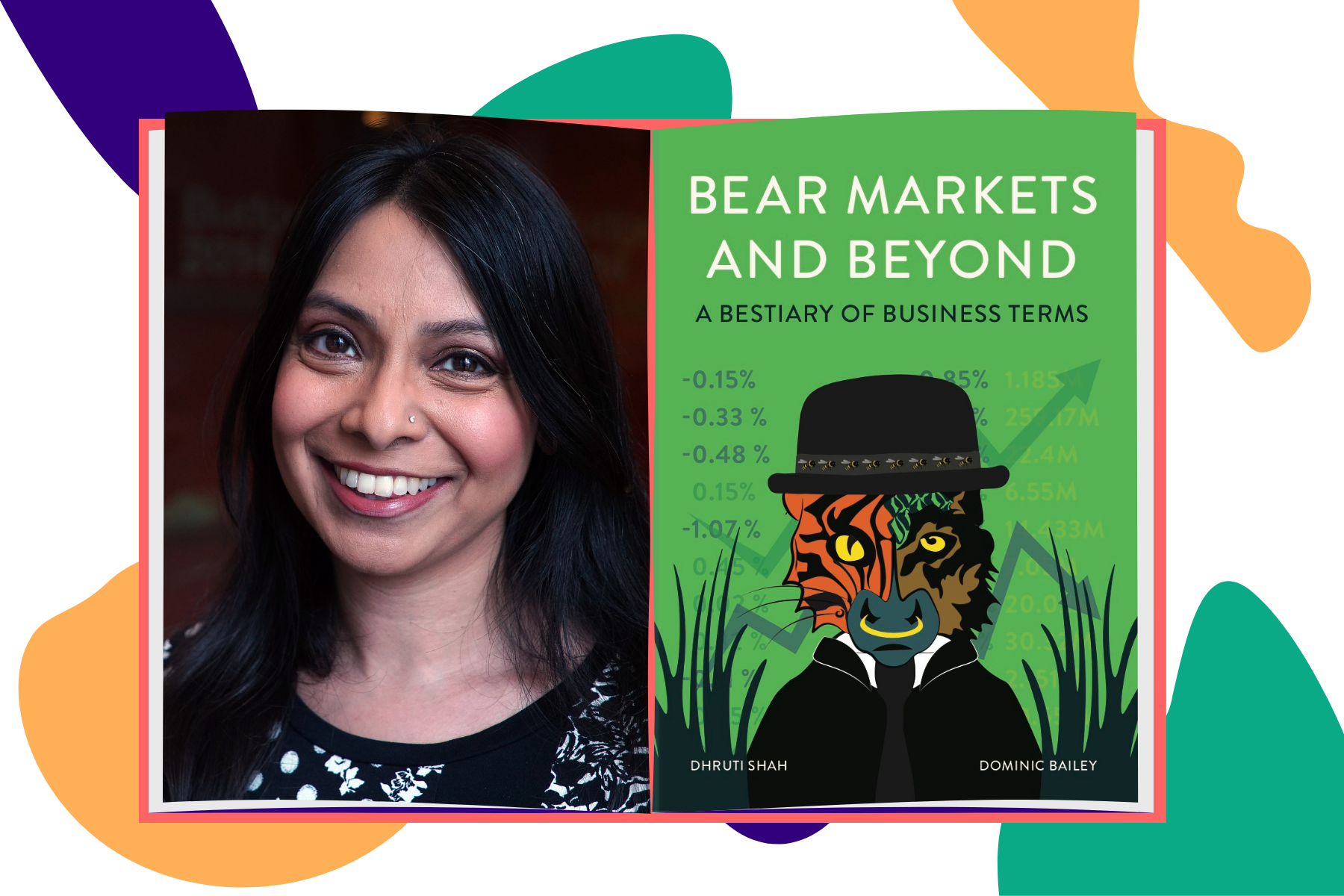 When Dhruti Shah, an award-winning  journalist at the BBC, was working in its Business Unit, she would frequently hear animal-related terms floating around, like black swans, fat cats and gorillas. Were her colleagues talking about an exotic-animal show? As it turned out, these words were financial terms, used by investors, entrepreneurs and those curious about the field of finance. Putting her storytelling experience to work, and partnering with Domenic Bailey, a visual journalist with over 20 years of experience, she wrote “Bear Markets and Beyond: A Bestiary of Business Terms” — a colourfully illustrated book intended to help everyone from financial experts to newbies and animal lovers to learn more about financial and business terms. Shah explains that,

Often people think business and finance isn’t for them or that it’s something that’s a closed off world full of jargon and very clever terms. But nature actually seeps into everything and has been used since time eternal to help people understand the world around them.

With 179 pages of colourful illustrations and easy-to-digest descriptions, describing anything from “alligator spread,” which means profitless transactions,  to “zebras unite,” which is a call to secure funding for startups headed by minority groups, “Bear Markets and Beyond” feels like a very uplifting and informative trip to Canary Wharf.  It has already received an amazing reception, as it has been awarded Short Business Book of the Year by the Business Book Awards, praised by Sir David Attenborough, and mentioned on Michael Rosen’s List of Books to Make You Think.

More inspiring than the book itself, if possible, is the journey that Shah went through to bring her project to fruition. Without the traditional publishing paths of literary agents, or trying to market this unusual book, the road to publication has its challenges.

We worked on the idea often in evenings and early mornings or any moment of spare time over a number of years while holding on to our day jobs. We didn’t have an agent to help us try to navigate this very new path; we had to get used to rejection as a lot of publishers turned us down or ghosted us before eventually we found an independent one willing to take a chance on us. Also the marketing and telling people about the book and encouraging people to buy something that’s so different from anything out there — that takes a lot of effort. Once people see it though, they often love it but it’s that hard graft in the first place — it’s very challenging.

Interestingly, Shah does not have a background in finance. Beginning her journalism career with local newspapers and some documentaries before coming to the BBC, her work brought her to write this book.  Shah says,

What I have is a particularly honed ability to take complex subjects and figure out how to make them relatable to a general global audience. I didn’t know many financial terms at all when I first embarked on this project but it was about immersing myself and as I learned, to bring others along for the ride. I think that’s why the book — “Bear Markets and Beyond: A Bestiary of Business Terms” — has been successful. There were no limits when I was writing it about who I was creating for — it was for anyone who wanted to learn more — whatever stage or age or whatever background they were from.

And “no limits,” is certainly a great way to describe the book; it’s the kind of book I’d like to put on my coffee table. Perhaps instead of flipping through pictures of old buildings, I could inspire my guests to broaden their horizons and explore the world of business.

You can connect with Dhruti on Twitter or through her website. “Bear Markets and Beyond,” is available at many major retailers.