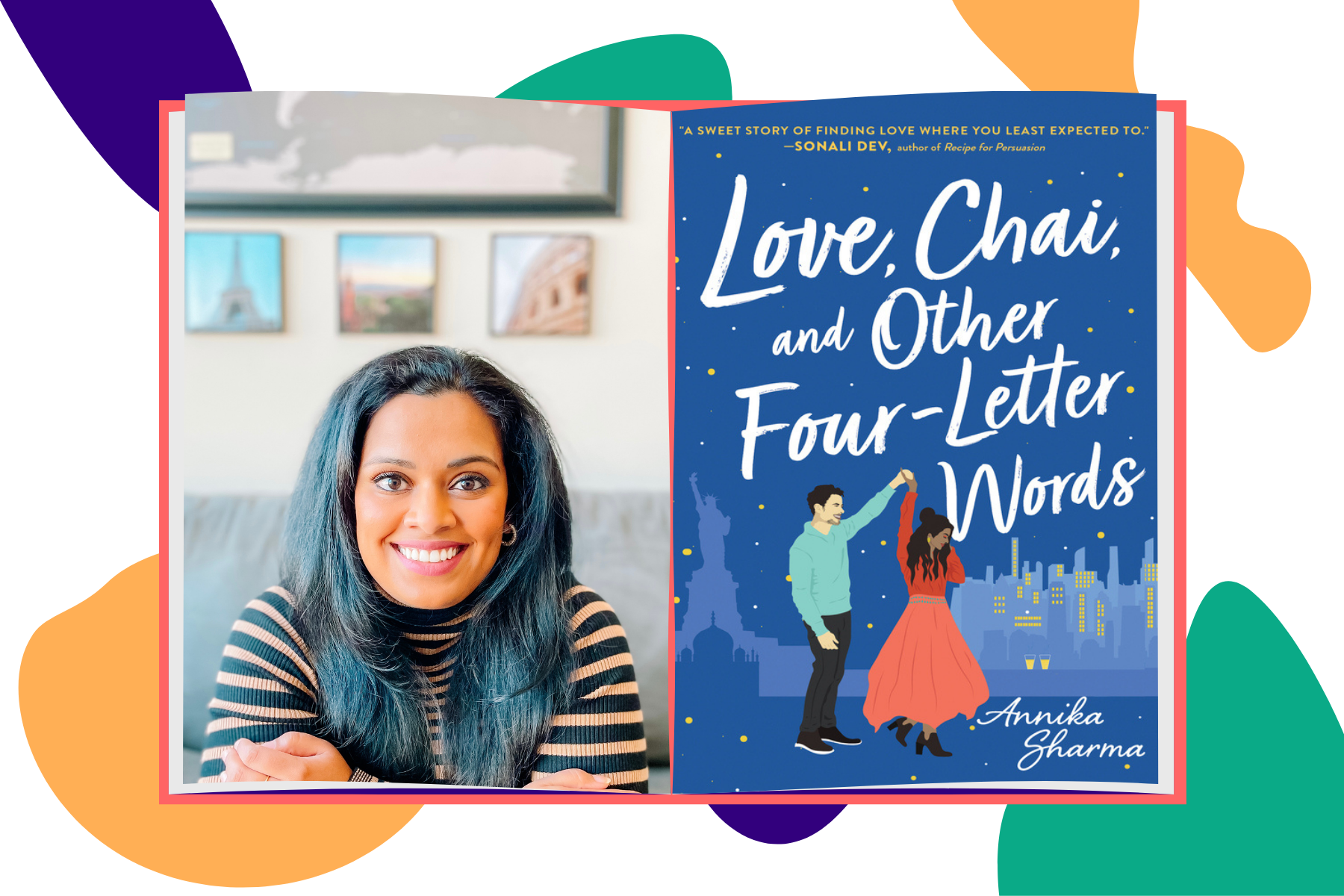 For Kiran Mathur, life has always gone to plan. As a child, she dreamed of leaving India to support her parents. Now, at 28 years old, she is a biomedical engineer in New York City and the light of her parents’ lives. The next major milestone in her life is marriage, which everyone expects to be arranged. There’s just one tiny problem: Nash Hawthorne, a charming and attractive psychologist, has just moved into Kiran’s building and the two are becoming fast friends.

Annika Sharma’s latest novel, “Love, Chai, and Other Four-Letter Words,” is the first in a three-book series about the Chai Masala Club, a group of four Indian friends navigating life and love in New York City on the cusp of their thirtieth birthdays. Sharma writes, “Just like New York was [Kiran’s] home away from home, the Chai Masala Club was her family away from family.” The club’s other members are the glamorous Payal, who dreams of starting her own fashion line, opinionated Sonam, a doctor who dreams of starting a nonprofit and writing a book, and feminist Akash, who wants to serve on a board. Their bond is palpable, and it is no surprise that Kiran describes this group as her “soulmates.”

The novel alternates Kiran and Nash’s viewpoints, which allows Sharma to do two things. First, Nash’s job as a child psychologist allows Sharma to draw on her own training in Early Childhood Special Education to discuss mental health. Nash survived a traumatic childhood and must now confront his trauma head-on (yes, that is a psychology pun) if he hopes to have a successful adult relationship. Second, Sharma turns Nash into a stand-in for the reader, so that Kiran can educate him about India. Between banter and blunders, the two take on everything from language (it’s “chai,” not “chai tea latte”) to the country’s demographics and customs, to even heavier topics like society’s expectations of women and how immigrants are treated overseas. Sharma balances these serious topics with the jokes throughout, so the tone stays light and bubbly. The book was clearly written with a lot of love and care, which resonates through the characters’ friendships.

[ Read Related: Serena Pitt on ‘The Bachelor’ and Finding Love as a Woman of Color ]

Bucket lists propelled the plot, as the Chai Masala Club members get serious about what they would like to accomplish before they turn thirty. Unsurprisingly, all four want to fall in love. Sharma captures the seeming significance of the thirtieth birthday.

“Thirty though. What comes after that?”

“Thirty-one…[but] it was the age we always looked forward to when we were little so it’s hard to look past that.”

Their bucket lists filled me with nostalgia, prompting me to dig out my own… Maybe before the next milestone birthday, I will run that 5K I thought about doing. The backdrop of the bucket list and Nash’s new arrival provides a rare opportunity to see New York City with fresh eyes, as he experiences its skyline and tourist attractions for the first time.

Speaking of firsts, the book was surreal at times because it described parts of my life I had never seen in a novel before. In the book’s opening sentence, Sharma writes,

“For an Indian like Kiran Mathur, spicy-sweet chai might as well have run through her veins, fueling her existence in New York City like the diesel powering her uncle’s auto rickshaw back home.”

This was the first time I had seen both America and India together as the backdrop of a novel, without one location portrayed as more exotic than the other. This unexpected familiarity hit me several times throughout the novel, like when Kiran does the Doonya Bollywood dance workout I’ve loved for years, and when her friends understand the significance of love versus arranged marriages without needing further explanation (It also happened when the Chai Masala Club reunited in person after lockdown, but I digress.) I am thrilled to see the growing genre of novels by and about South Asians and to know that future readers will grow up with stories that depict their own lived experiences.

[ Read Related: Arranged Marriage: How Are Promises of a Lifetime Made in One Day? ]

Familiar and comfortable, with just a hint of spice, Annika Sharma’s latest novel feels like a hot cup of chai on a rainy day. This emerging genre of South Asian romance novels has captured my heart and I cannot wait to see which member of the Chai Masala Club gets their own book next.