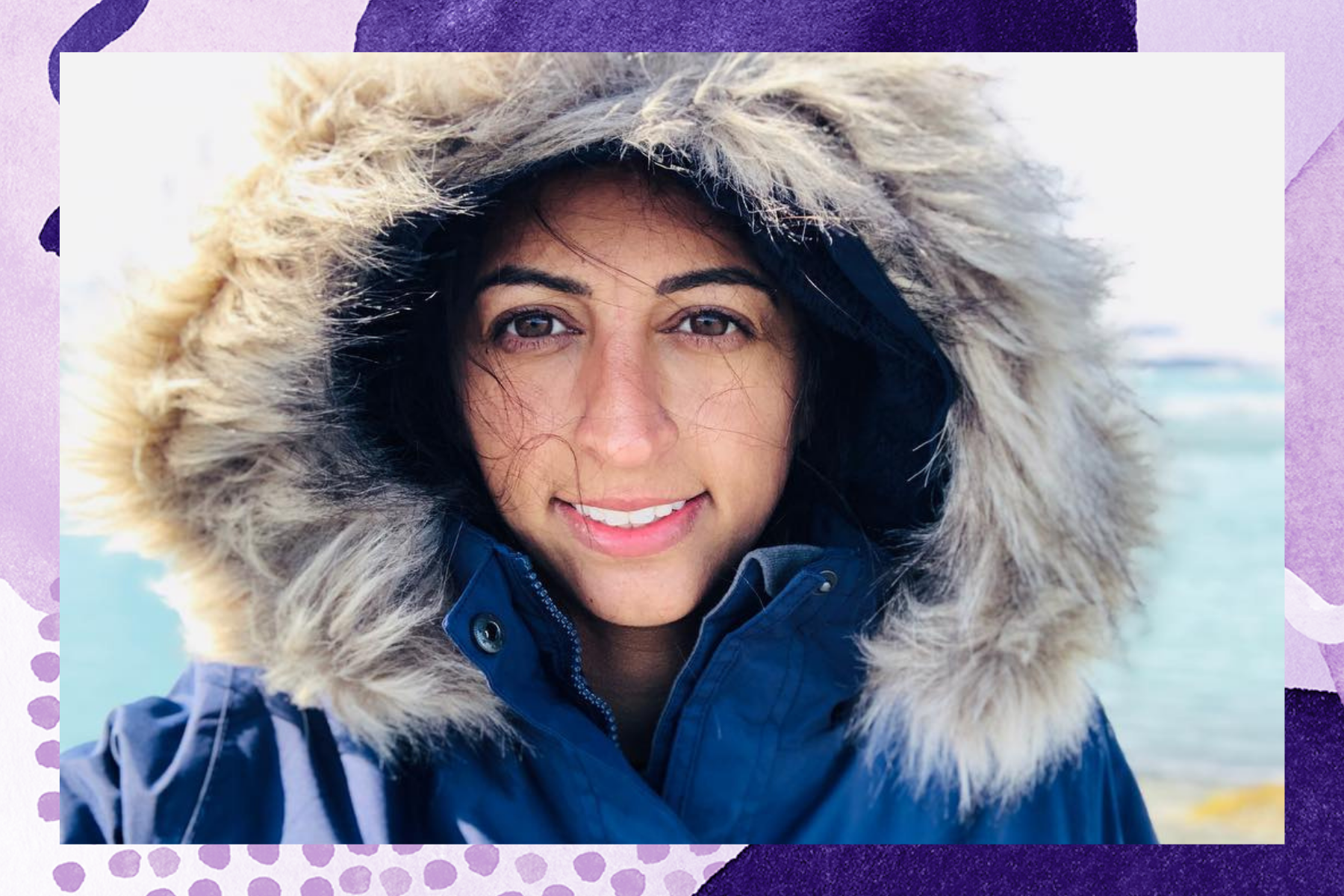 Preet’s multifaceted career comes from her rebellious spirit and her need to push boundaries in every way, shape and form. She challenges herself mentally and physically through marathons, large scale exercises, personal adventures and much more. If you do not yet know who Preet is, she is a British army officer, physiotherapist, Nordic skier, ultra-marathon runner, endurance athlete, among other things!

Her multidimensional career makes her latest feat of exploring Antarctica for 45 days solo with no resupplies an adventure of a lifetime. I got the incredible opportunity to interview her around her decision to explore Antarctica, making her way through 700 miles of the most severe weather conditions in the world.

I really enjoyed Preet’s first statement when I met her over a WhatsApp call about the “outdoors being for everyone, yet we still do not see a diverse group of individuals setting out on their own and exploring the unknown.” Preet provides insight about what that statement means to her.

It’s not that easy to go hiking when you don’t know anybody else that does that or know anybody that looks like you doing it. That relates to so many things, representation is so important. I’ve had young women tell me that they feel they can relate to me because I’m brown, they feel like they can do it because I’m doing it too. That is so powerful. I want to show that is ok to step outside of your norm, it is ok to break boundaries, we create our own normal. In Asian communities, we’re often discouraged from doing things that are out of the norm. I have been labelled the ‘rebel’ or ‘stubborn’ on many occasions because I want to pave my own path. Imagine what we could achieve if we are encouraged to push our boundaries. I really hope to inspire people to do just that, push their boundaries and believe in themselves.

Preet continued to walk me through her decision to join the British Army at a young age and how she did not tell her family about the decision initially. She talks in detail about the perspective she gained and how these experiences trained her for the future.

When we do things out of the norm, it is often those closest to us that hold us back. This could be because they’re scared or don’t know anything about it or they’re concerned about what others may think. I waited at least a week before telling my family I joined the Army and members of the family weren’t pleased. I haven’t looked back on this decision and since then my family have seen the breadth of opportunities I have had, my personal growth and how much I have accomplished so far.

I love being in the Army, the first time I went camping was when I joined. I learnt most of my outdoor skills throughout the military and the more I achieved, the more I realized I was capable of. Joining the Army as an Officer was once my glass ceiling but when I had achieved that, I just realized that I could achieve more. The Army has seen me in exercises and deployments all over the world, including Nepal, Kenya, Norway and South Sudan. My wide skill set has enabled me to work with other UN countries and support the COVID vaccination rollout.

I loved learning about Preet’s polar expedition to Greenland to train for her Antarctica mission. She talks in detail about the monetary efforts it took for her get this expedition off the ground as well as the hardships she faced throughout this journey and the grit it took to overcome the obstacles.

This was the toughest part of training I completed. It was difficult to get to Greenland because of the COVID restrictions; I was constantly checking travel restrictions. When it opened up for travel, I had a week to find a guide and get all of my kit and equipment together. After quarantining in Greenland, 3 flights, a helicopter and a boat, we finally made it to the start line. We navigated over crevasse fields for the first few days — I’ve never seen anything like it before. When we got to the snow, we put skis on and experienced all sorts of weather, we had rain, snow, whiteouts (very poor visibility) and storms where we were unable to travel. During the storm days, I would get out of the tent on my hands and knees, for my goggles to freeze up in seconds, and then spend a few hours trying to prevent the tent from being buried in the snow. This continued for a few days. Toward the end, we were running out of fuel and therefore had to ration it, my kit was wet and it was difficult to dry out inside the tent. It took a few days for the helicopter to get to us because of the weather conditions but it eventually came.

After getting off the ice, we had more delays. Our kit and equipment hadn’t arrived at the correct place our flight was cancelled so at one point I was in a small town trying to connect to WiFi and join the second year of my MSc online! I eventually made it back to the UK, still in my snow boots, because my kit with trainers was still somewhere in Greenland. I felt quite deflated but the next day, still decided to run London Marathon virtually on the patio. I didn’t have any trainers so I completed it in my Army boots and it took 7.5hrs. I’m glad I did it because it just shows even though I was mentally and physically tired, I was still able to do more and I try to remember that lesson.

This trip cost me all of my life savings and it took me over 6 months to pay the expedition off. I used most of my annual leave and it was hard. But I have no regrets, I learnt so much and I wouldn’t be ready to go to Antarctica if I hadn’t done this trip.

Antarctica is one of the coldest, driest and windiest continents on Earth without anyone living there permanently. I wanted to get to the bottom of Preet’s fascination with Antarctica and what her internal compass is for exploring the unknown and pushing her boundaries. Preet elaborated on what it means to her to be able to explore Antarctica.

I feel incredibly privileged to be going to Antarctica. I didn’t know very much about the continent up until 2.5 years ago, I didn’t grow up reading about polar explorers or even know how I would go about starting an expedition there. But that is ok, because if I can do something so far out of my comfort zone, hopefully it will inspire others to do the same. They don’t have to do an Antarctic expedition (but let me know if you do want to, I’d love to help!), but it can be anything, pushing out of your comfort zone is scary but also incredibly rewarding. Just take that first step.

There is something fascinating about pushing our mental and physical boundaries. How often do we reach our limit, how do we know how far we can push ourselves. I haven’t reached my limit yet. Antarctica is a fascinating place, it is the coldest, highest, driest and windiest continent on Earth. There are only a few female adventurers that have completed a solo, unsupported trek on this continent. It is time to add some more names, diversity and to make history. If successful, I will be the first woman of colour to complete a solo expedition on the continent.

We concluded our conversation with Preet talking in detail about what she will be taking to Antarctica, how she will be tracked and what she hopes to see during her expedition.

I will be taking all of my kit and equipment that weighs around 90kg on the 700 mile expedition. The main weight is the food and fuel so the bulk will get lighter as I get closer to the South Pole. The other kit I’m taking will be all of my communication equipment, which includes satellite phones and GPS systems. Every 24hrs I will send my live location and if you head on my website, there will be a map and you can see how far I have gone each day (this will go live as soon as I start — around 21 Nov.). Other bits of kit include my cooking system, a tools and repair kit, spare clothing, additional layers and my tent!

Sadly, I won’t be seeing any penguins on my route and I’m unlikely to see any other people until I reach the last degree. I’ll be working in nautical miles out there and will be travelling south in degrees of latitude towards the South Pole. The South Pole is 90 degrees south and I will start at 80 degrees south (so I will travel 10 degrees in total). Each degree is split into 60 nautical miles. The last degree is often a guided expedition so I may see some people in that last bit.

The other milestone (apart from the South Pole itself), is Thiel’s Corner. There is a runway and fuel depot there for Antarctic Logistics and Expeditions (ALE). This will be my half way point and I should be able to see Thiel mountains from there too. It is always nice to be able to see something on the horizon that you are heading toward (when visibility is good!)

Preet hopes to combat the perception of what an explorer looks like and hopes for more individuals to truly showcase themselves by exploring what really calls out to them. Her experiences of being in the British army as well as her personal expeditions truly showcase an individual hungry for adventure. To follow Preet’s Antarctic expedition click here: www.polarpreet.com
Instagram will also be updated daily.