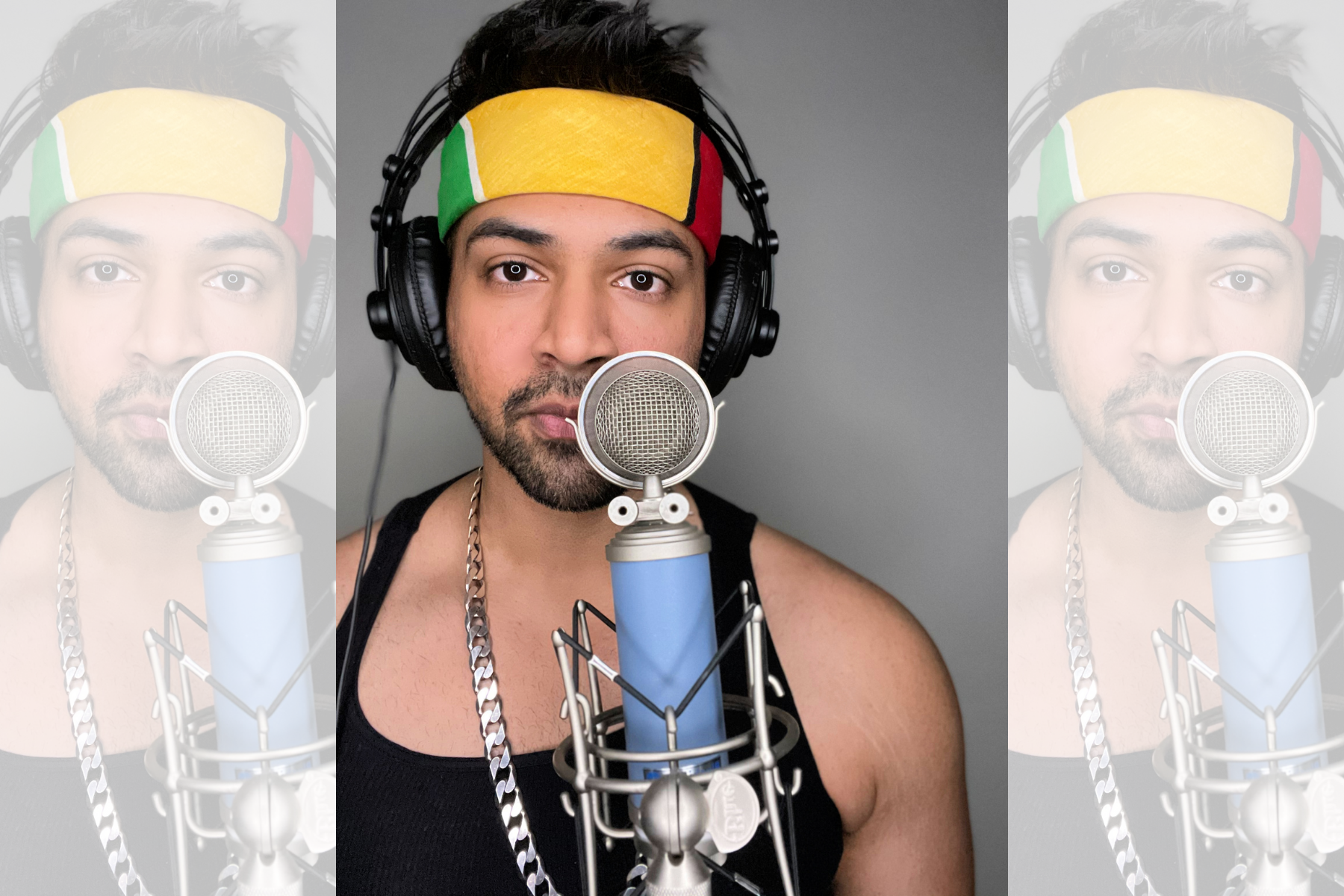 New York-based rapper, actor and content creator Tenn Buick fuses English, Guyanese Creole, and Hindi, to carve out his own lane in music. He is of Guyanese background and brings his culture to the forefront of his music through projects like his “Tip Tip Barsa Paani” remix.

Buick’s content is full of remixes of popular songs, original tracks, skits, and so much more. One of my favorite formats he does is “This is what it would sound like if a particular song featured a Guyanese artist.” I asked Buick how he came up with the idea of these projects and he happily elaborated.

Guyanese Creole is a part of my vernacular. I grew up hearing it with my family and relatives so I draw upon it in my music. When I started using TikTok I noticed a ton of videos where people were creating content around “this is what it would sound like if I was featured on this song.” I thought to myself, I can do a whole freestyle and I can drop a bunch of Guyanese Creole bars, and they got pretty popular. Jay Sean duetted one I did to ‘Down,’ and Saweetie reposted one I did one to ‘Tap In.

These TikToks became Buick’s major introduction to the Guyanese community. His content was being shared all over the Internet and in WhatsApp chats around the world. This filled Buick with a sense of fulfillment as he was creating content showcasing representation for his community.

As Buick has used Caribbean slang in some of his covers I thought it would be fun for him to teach us some common words.

Buick says in his family, it can’t just be any song, it has to be a good song.

After hearing some of the different Caribbean slang in the form of phrases and words, I realized many artists around the world have taken influences from Caribbean culture. These words have been peppered into the U.K. hip-hop scene as well as the music coming out of Canada from artists like Drake. I continued to learn more about Caribbean history and specifically Buick’s grandmother’s experiences moving to Queens, New York.

Buick has uploaded videos of his grandmother telling stories of Guyana and immigrating to New York on his Instagram. He talked passionately about how many Guyanese immigrants struggled when they came to the U.S. with barely any money in their pockets just for the idea of a better life. Buick elaborated on how his grandmother has influenced him and has helped him strive for something greater.

I just started rolling the camera and didn’t tell her otherwise, she probably would have been self conscious about it. My grandmother was cleaning people’s houses, just to get 50 bucks a week back then. She had to send a chunk of it back home to her children in Guyana who couldn’t make it here yet. My grandmother had to use the rest of it to survive to pay rent and to eat. Just thinking about it is insane.

We moved on to his hilarious videos encompassing Bollywood mispronunciations. Buick elaborates on the idea behind these videos.

In the Caribbean community, most of us didn’t really grow up speaking Hindi but we were very in tune to Bollywood culture because of the music. A lot of Caribbeans don’t necessarily know the words so they might mispronounce something and that was the source of a lot of jokes for me. Also, a lot of my friends from different backgrounds that weren’t familiar with Bollywood were into the music because of being around me, and they would mispronounce stuff all the time, even though they tried their best. It was sort of a childhood joke that I was able to make a resurgence with because I saw it became a format for a joke on TikTok.

While listening to Buick’s original hip-hop songs I found that he took inspiration from ’90s hip-hop. You can clearly see his storytelling skills through his poetic lyricism. I thought it would be fun to understand his musical influences and what role ’90s hip-hop played in his life.

There is an emotional attachment to what you grew up on. What sort of state of mind you were in while you were in your childhood, especially as a teenager, is what you will think is the best music. I grew up on Run DMC, LL Cool J, Wu-Tang Clan Biggie, NAS, and others — this was a generation of artists with so much character. Every city and area had a distinct character and sound. You could tell what part they were from just by listening to them.

Buick continued to explain that these artists come from an era where your lyrics and punchlines were the most important. If you didn’t come in correctly with heavy and raw poetic lyrics you might as well not be a rapper.

We ended the interview with Buick spitting his hardest bars from his song “Big Ideas.”

Flow is quick and nimble bars is jumpin over candlesticks
I’m jack on the track here to serve this whoop-ass, always got a can of it
that lazy shit you listen to is wack I’m not a fan of it
wipe half of the rap game out with a fuckin snap I’m on some thanos shit
t-to infinity and beyond, I’m lightyears ahead of these fake ass rappers
buildin buzz, I’m here for the longrun, they aint shit, will they last after
fifteen minutes, yea i doubt it, shit they spit well they aint bout it
t-e-double-n is here to wake you up, your judgment’s clouded
here with a verbal stomach pump for the fuckin trash you been ingestin
no days off, and it’s gon pay off, blood, sweat and tears I’ve been investing
fortune and glory on my mind, stay on the hustle stay on the grind
I don’t mean to say I’m boring when I tell you I aint into resting
NYC to overseas, you better have that dough for me
I could never lose cuz I got sceezy watchin over me
the hero that the game deserves, but the joker had some solid words
I’m the fuckin best (so what?) so I should never flow for free

Buick has been grinding in the music and acting world for years. He has even met some of his favorite rappers like Eminem, 50 Cent, Ludacris, LL Cool J, and more. His upcoming plans include releasing new music, and you can catch him as a guest star on the Fairly OddParents live-action reboot, which will be streaming soon on Paramount Plus. Also, he’s just an amazing source of representation for the desi diaspora, amirte!