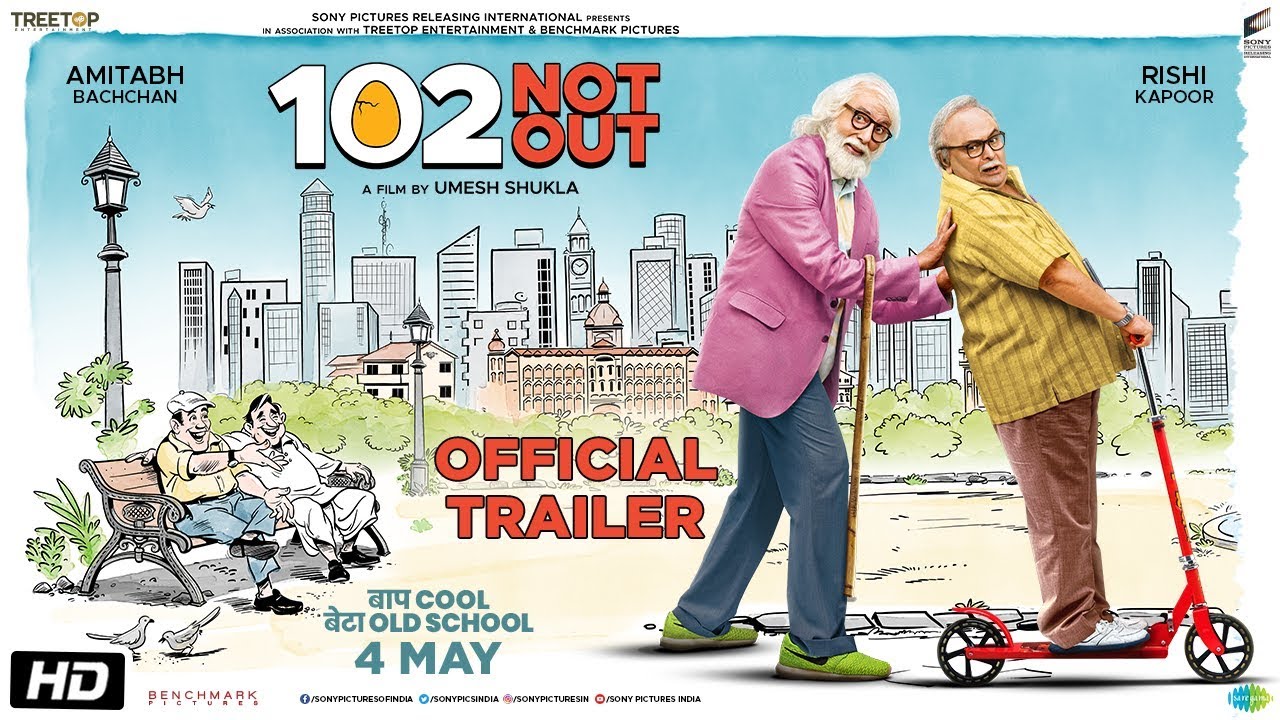 I have many, many conflicting feelings about “102 Not Out.”

Obvious cricket metaphor notwithstanding, the film rests on a highly improbable premise. You’ll need to walk into the theater with your disbelief suspended, but during the course of the proceedings you might need to forget you ever had disbelief to begin with.

Let me back up and issue a retroactive caveat: Your Dad will LOVE this movie. It is absolutely rife with ‘uncle’ jokes, and though they may be few and far between, a majority land nicely. “102 Not Out,” in addition to being a superb bit of casting, is a clean, entertaining film suitable for the whole family. There are no heroines serving as decoration because this is an outing devoid of heroines.

This film presents itself as a father-child love story, which it mostly is. I say ‘mostly,’ because the love story is one-sided for the most part.

A huge pro of this movie is casting. It’s initially strange to see 75 year old Amitabh Bachchan play 65 year old Rishi Kapoor’s father. Babulal Vakhariya, (Kapoor) is 75 years old, and lives in the stereotypically named Shanti Niwaas with his 102 year old father, Dattatreya Vakhariya. The relationship is largely believable, thanks to the makeup and prosthetics that Bachchan dons. Of course, this is not how I pictured Akbar and Anthony (RIP, Vinod Khanna) coming together again, but it works.

The premise of “102 Not Out” is this: Dattatreya Vakhariya is trying to beat the record set by an elderly Chinese man of 118 years and be named Oldest Man Alive. He only has 16 years to go, and to ensure that he makes it until then, he wants to only be surrounded by positive, happy people.

Unfortunately, his housemate/son is neither positive nor happy, so Dattatreya comes home one day to announce that he wants to send his “boring, tired” son to an elder care facility. This is mostly played for laughs, and those who know what the inside of an elder care facility is like (such as my family and I) will not be terribly amused. There is a compromise, however: if Babulal completes the conditions his father sets forth, he can stay in the house.

Therein lies our intertwined web of ‘cons.’ Babulal is portrayed by Rishi Kapoor as a curmudgeonly old man who takes care of his immature father, but is a walking, talking dark cloud of a human. If Eyore was an elderly Gujarati uncle, he’d be Babulal.

His characterization is at best inconsistent and at worst, just not credible. Babulal has very little agency in the beginning despite being a FULLY GROWN MAN, and defers immediately to his father in all matters. A 75-year old man who, despite fighting his father’s decision, accepting it ultimately as ‘fait accompli’ didn’t sit well with me. What’s more, Rishi Kapoor tries and fails at a believable Gujarati accent (Bachchan has no such limitations on his skills) and the resulting disparity between how father and son talk is jarring at times. Babulal exists only in 2 dimensions for 80% of the movie, only to come to life at the end, a day late and a dollar short.

Jimit Trivedi is a serviceable comic foil to our elderly protagonists, but the three main characters’ portrayal is ends up being a mishmash of gujju stereotypes that have no place in a movie set in 2018 (or ever, really.)

Amitabh Bachchan gives a soaring, tour-de-force performance as a young at heart, vivacious old man. He is a pleasure to watch, from the look to the speech and accent work, and carries the story on his shoulders.

I found the tone familiar, and realized why when I saw Umesh Shukla’s name in the credits. Much like his only other successful film, “Oh My God,” “102 Not Out” is also adapted from a Gujarati play (in this case, Saumya Joshi’s play of the same name.)
“102 Not Out” starts out as a comedy and makes a hard left turn into sentimental seriousness bent on giving moviegoers a ‘message.’ It is very similar to “Oh My God” in that the tone gets a bit preachy sometimes, telling the audience to live a certain way and to see the world a certain way.

I would recommend this movie to rabid fans of either Bachchan or Kapoor (or both,) and to every uncle and aunty who complains that all new movies are horrible. If neither of these scenarios apply to you, well, you might want to wait until you can see “102 Not Out” on TV or in an airplane.