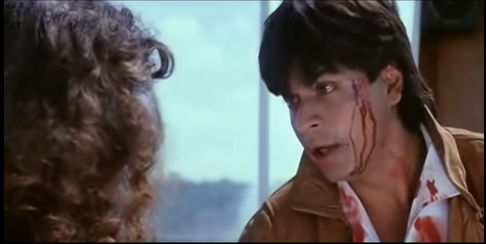 Valentine’s Day means a time of love, romance, cheesy displays of affection, and a huge surge in profits for Hallmark, flower companies, and chocolatiers. It’s a holiday that requires loved ones to shower each other with affection (despite the fact that they should probably do that every day) and can make people who are not in relationships feel inadequate.

So, this year, maybe it’s time to boycott the whole thing—and what better way to boycott something that is so synonymous with love than with some good ol’ Bollywood movies that feature love-gone-wrong or no love at all?

Trade in your favorite rom-com with these anti-Valentine’s Day horror and drama Bollywood flicks—most of which will likely make you appreciate your significant other, or single status, even more.

One of Shah Rukh Khan’s biggest roles absolutely deserves a place on this list thanks in large part to the sheer terror he brought Juhi Chawla’s Kiran as her obsessed classmate hellbent on being with her, no matter what it takes. Really puts relationships into perspective, doesn’t it?

Anushka Sharma’s revenge film, “NH-10? may not feature a terrifying husband or lover, but the film does start the conversation on the horrors of the South Asian honor killing custom.

While Sharma’s Meera begins the film with a happy, married life, things soon turn dark in this thriller. Meera and her husband Arjun’s road trip honeymoon takes a turn into violence when the two stumble across and attempt to stop an honor killing. What follows is a tale of survival and revenge and a whole lot of ass kicking by Sharma.

Go inside the mind of a serial killer with 2015’s “Main Aur Charles.” Randeep Hooda stunningly portrays a real-life enigmatic killer, Charles Sobhraj—a man who manipulated people and the justice system for years to go unconvicted. If that doesn’t get you out of the Valentine’s Day spirit, nothing will.

SRK strikes again in a film that earned him a Filmfare Award. (Isn’t it funny that some of the actor’s best work are when he plays a villain/anti-hero?) In this film, Khan plays a scheming son of a disgraced businessman who goes to violent lengths for revenge including manipulating love and committing lots and lots of murder.

It could be argued that “7 Khoon Maaf” is a film about a woman who is searching for true love—but man does she go about it the completely wrong way. Priyanka Chopra’s violent, amazing role as a murderous bride makes for a perfect Anti-Valentine’s Day film because sometimes love is just too brutal.

Speaking of brutal love, “Gupt” shows us that even reciprocated love can lead down a dark and dangerous path, especially when family tensions and greed come into play.

Thankfully for Valentine’s Day fans, “13B” doesn’t really focus much on tarnishing the name of love in any way—but it still may not be the most appropriate film for February 14, as the film makes family life a much more frightening concept than it seems.

This movie features more obsessive love, courtesy once again of Shah Rukh Khan. This time, however, the heroine gets to fight back in a big, big way. “Anjaam” will make the Anti-Valentine’s Day enthusiasts cheer for girl power.

“Bhoot” may not appear to be anything special; it’s just a film featuring someone being possessed by a spirit—but it still follows the concept that love can be violent if in the hands of the wrong person. Check it out strictly for Urmila’s performance as a woman possessed: it’s crazy in the best way.

This movie features the classic tale of Devdas turned completely on its head. “Devdas,” despite having a sad ending, is actually a great film for Valentine’s Day. “Dev D,” however, is filled with people making bad decisions for bad reasons, drug use, sex, violence, and unlikable characters. It turns Devdas into more of a cautionary tale about modern day love, lust, and romance—and it’s really damn good.

This one is not about love, thank god—but it is about young people once again making bad decisions. If you want to take Valentine’s Day out of the equation completely, why not check out a film that has nothing to do with the emotions associated with the holiday and just watch some characters’ lives go from crazy to bad to worse?

SRK isn’t the only person who can play an obsessed lover; in fact, Urmila might take the cake. In “Pyaar Tune Kya Kiya,” nothing can stop Urmila’s Ria from trying to get the man of her dreams—even if it means falling into a pit of insanity.

Once again, let’s take love out of the equation on Valentine’s Day with this frightening, fascinating film. “Ek Thi Daayan” is a thriller rooted in the belief in the supernatural world and gives its three female leads fantastic material with which to have a violent and crazy blast.

Even if you’d rather not celebrate Valentine’s Day, you don’t have to spend all of your energy watching a film about dark topics like violent love or supernatural spirits. Sometimes, all an Anti-Valentine’s Day film needs to be is something that can make you feel good about being independent.

“English Vinglish” absolutely does that. The film—which features the incredible return of legendary actress Sridevi—follows Shashi, an Indian housewife living in America who can’t actually speak English. She decides to be more than her stereotype and enroll in English classes, finding her inner strength in the process.