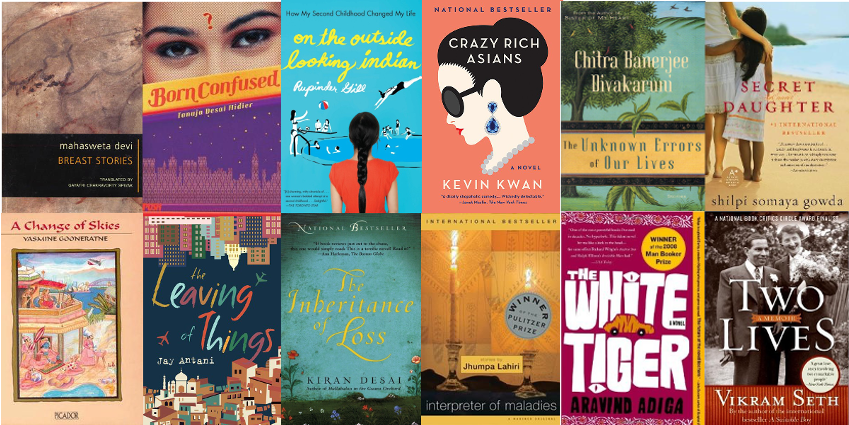 In times like these, when social distancing can save our world and those in an already vulnerable state, a good book can do wonders. So whether you’re shifting to a work from home schedule, having to work on the frontlines, or you’re checking in on family and friends, and making arrangements for the elderly and kids in your lives, be sure to take 15 minutes a day to practice *real* self-care. In this case, we’re hoping reading a book you’ve had on your to-dos will do the trick. We, at Brown Girl, have revamped our 23 must-read classics by South Asian and Asian American authors.

Have suggestions? Comment with the title/author below and we’ll add it to our second list of must-read books!

1. “On the Outside Looking Indian” by Rupinder Gill

Based on the events that took place during her childhood, as a child of Indian immigrant parents transplanted in Canada, Gill crafts a lighthearted and heartfelt story to recreate a second childhood which she only saw others experience. As she explores the activities she missed out on as an adult, Gill creates a funny and relatable tale.

Providing an inside look at the lavish lifestyles of new and old monied Chinese families, author Kevin Kwan brings to light the reality of a new age romance set in opulence. When the son of an extremely wealthy Chinese family brings home his American-born Chinese girlfriend, she finds it difficult to adjust, while surrounded by crazy rich Asians.

3. “The Inheritance of Loss” by Kiran Desai

Set in the Himalayan mountain range during the 1980s, “The Inheritance of Loss” delivers a wonderfully woven tale about a bunch of people who struggle against the effects of colonialism and adjusting to an emerging modern world. A judge, his orphaned granddaughter, the judge’s cook, and the cook’s son illuminates the intricacies of cultural identity in a profound way.

4. “The Interpreter of Maladies” by Jhumpa Lahiri

One of the few short story collection recipients of the Pulitzer Prize of recent times, “The Interpreter of Maladies” is a classically woven tale of different families, cross-generational clashes, biculturalism, love, sorrow, death and happiness.

Many have hailed author Vikram Seth as one of the world’s best authors. His book “Two Lives” stands as a testament to his writing prowess as it details the true story of two people, Shanti Behari, and Helga Caro, who fell in love in the 1930s in Berlin.

When Kavita gives her daughter away to a Mumbai orphanage to help her escape the fate of her firstborn daughter, who was killed by her father (due to female infanticide), an American family from San Francisco decides to adopt her. The book follows the lives of Asha’s poor, biological parents living in Mumbai’s slums and the early lives of her Indian-born American parents whose privileged lives run in stark contrast to the life she might have had.

7. “The White Tiger” by Aravind Adiga

Capturing the essence of India’s “darkness”— the large lower class — Adiga writes about one man’s rise to successful entrepreneurship from a start as a driver to a wealthy landlord in New Delhi.  As he tells his unusual story, readers are hit with the much larger implications of caste, religion, dishonesty, destitution, and listlessness.

8. “Unknown Errors of Our Lives” by Chitra Banerjee Divakaruni

A collection of short stories, focusing on the immigrant experience of Indian women moving to America, “Unknown Errors of Our Lives” delves into the dynamics of marriages, in particular, illuminating relationships in various stages. A wonderful read for those in serious relationships or for those bored on Valentine’s Day.

The Joy Luck Club is a group of serious Chinese-American mah-jongg players. Each woman in the group has vivid memories of childhood in China and of life raising children, daughters, in the U.S. The stories link each child and each parent, delivering wise advice and funny stories. Each conflict is more interesting than the next and each has its own melodrama and excitement.

The classic — which has withstood the test of time even within the English literary canon — narrates the story of Dr. Aziz, a young doctor who is frequently found in the company of English citizens abroad. When Adela Moore, a newly transplanted acquaintance, files a lawsuit against him for attempted assault while visiting the famous Marabar caves, Aziz’s life goes into a tailspin. The novel is a commentary on the intrusion of the British Raj, racial tension between Indians and Brits, and the micro effects of their interactions in the period immediately following British invasion.

Feisty female protagonist and journalist Rukshana feels free and empowered when she plays cricket. Growing up in war-torn Kabul, where infractions against Sharia law are stringent, Rukshana feels trapped after writing a story against the Taliban and doomed to an arranged marriage with a minister intent on wedding her. When an opportunity to travel internationally comes up, Rukshana uses her knowledge of cricket to compete and secure her last chance for autonomy.

12. “The Namesake” by Jhumpa Lahiri

Gogol Ganguli does not know the true story of the origin of his birth name, but he does know the incessant mocking and questions it has been the subject of since. Lahiri’s classic growing-up story relays the lives of Gogol’s parents and the beginning of their loveless marriage in Calcutta to the wide span of Gogol’s youth and adulthood in the suburbs of Boston. A tear-jerker and wonderfully written classic, Lahiri does no wrong in this novel.

A groundbreaking collection of stories from Muslim American women that expels myths about diverse women’s struggles with love, “Love, InshAllah”, is a breath of fresh air in its shattering of stereotypes and conceptions of Muslimah identity. You can check out its sequel, “Salaam Love”, too.

14. “The Hundred-Foot Journey” by Richard Morias

You’ve probably seen the Oprah and Spielberg backed mega-hit feature film but, like they say, the book is a lot better! Morais’ “The Hundred-Foot Journey” may be Manish Dayal-less, but it is still a spectacular novel.

15. “The God of Small Things” by Arundhati Roy

The ever-popular novel recounts the story of a dysfunctional family battling the politics of their local postcolonial government in Kerala, India. As time goes on, twins Esther and Rahul, are forced to shed their innocence. As they mature and grow, Roy teaches valuable lessons about love, relationships, and family.

16. “Teatime for the Firefly” by Shona Patel

In 1943, Layla Roy an educated young woman raised by an eccentric grandfather marries the man she loves. When she moves in with him and his family she finds adjusting to life in Assam, with British housewives, tea plantations, and wily servants are far from what she expected.

Growing up in New Jersey, seventeen-year-old Dimple feels too American in India but struggles to fit in with peers in America. Her similarly outcast friend Gwyn helps her navigate life as she tries to accept her helicopter parents and “bad boy” Karsh Kapoor.

In a moving and heartrending manner, Devi powerfully writes about three different women and their breasts. Paying particular attention to marginalized, poor, tribal women, Devi weaves a tale that is important and well visioned.

19. “A Change of Skies” by Yasmine Gooneratne

A lighthearted comedy about Sri Lankans immigrating to Australia, Gooneratne makes wise remarks on cultural oddities and parallels to behaviors found in Australia and Sri Lanka. A witty and fun read!

20. “The Leaving of Things” by Jay Antani

A rebellious and drifting Indian-American teenager, Vikram, balances life living in Wisconsin in the ‘80s. When one night of drunkenness convinces his parents to move the family back to India for good. Once at “home,” Vikram struggles with seclusion, readjustment to life, culture shock and chaos from day-to-day until he is romanced into a creative flow by an old camera.

Nikki lives in cosmopolitan West London, where she tends bar at the local pub. The daughter of Indian immigrants, she’s spent most of her twenty-odd years distancing herself from the traditional Sikh community of her childhood. When her father’s death leaves the family financially strapped, Nikki, a law school dropout, impulsively takes a job teaching a “creative writing” course at the community center in the beating heart of London’s close-knit Punjabi community. Because of a miscommunication, the proper Sikh widows who show up are expecting to learn basic English literacy, not the art of short-story writing. When one of the widows finds a book of sexy stories in English and shares it with the class, Nikki realizes that beneath their white dupattas, her students have a wealth of fantasies and memories.

Through the inspirational stories of 50 famous and under-celebrated women from Afghanistan, Pakistan, India, Bangladesh, Nepal and Sri Lanka, South Asian girls will have a chance to dream about lives for themselves that radically differ from the limited narratives and stereotypes written for them by their culture, wider society and the mainstream media.

23. “Brave, Not Perfect” by Reshma Saujani

By choosing bravery over perfection, we can find the power to claim our voice, to leave behind what makes us unhappy, and to go for the things we genuinely, passionately want. Perfection may set us on a path that feels safe, but bravery leads us to the one we’re authentically meant to follow. In “Brave, Not Perfect,” Reshma Saujani shares powerful insights and practices to help us let go of our need for perfection and make bravery a lifelong habit. By being brave, not perfect, we can all become the authors of our best and most joyful life.

Win a Set of 3D Fiber Lash Mascara by Younique