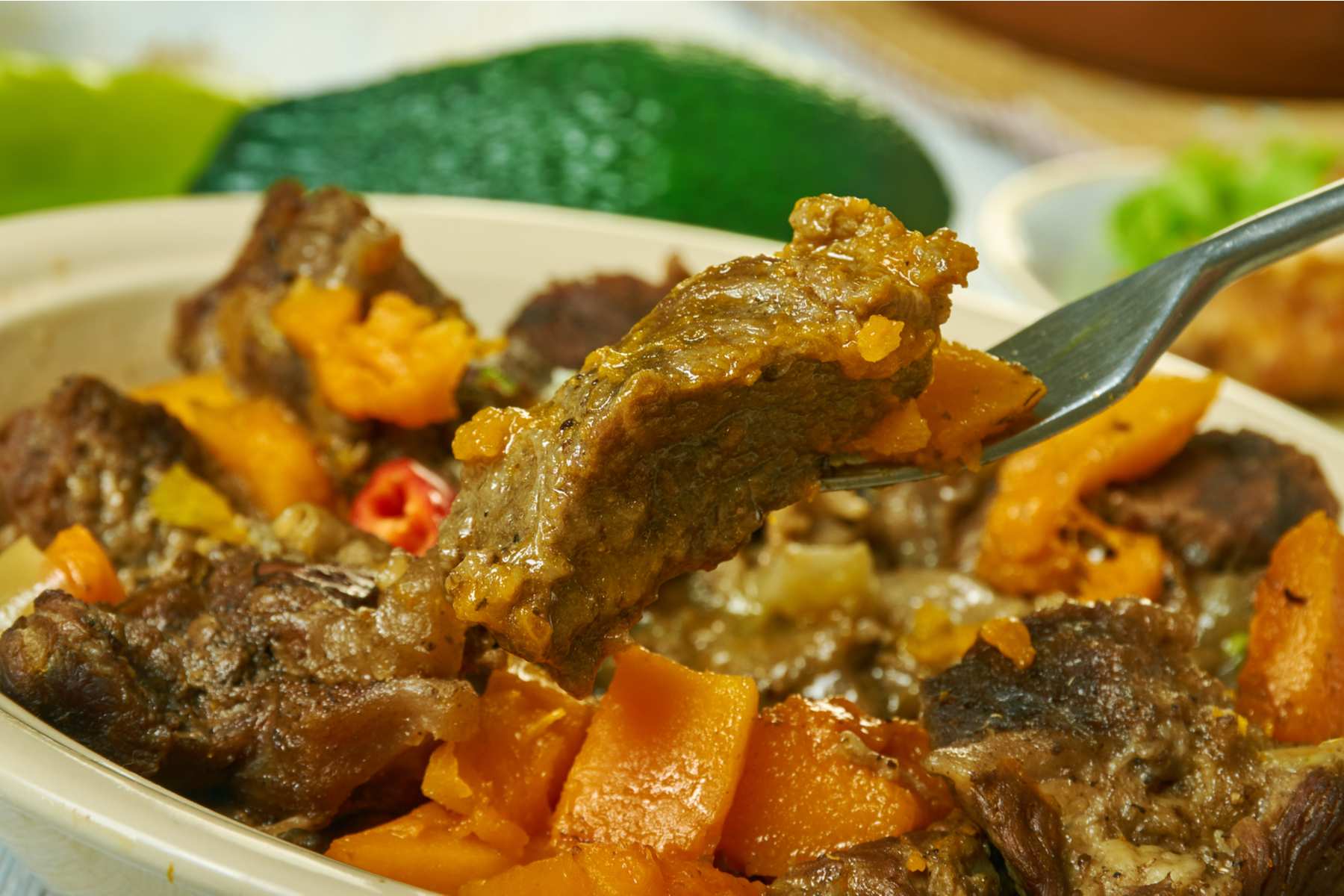 The Caribbean is a vibrant combination of cultures that arose from an early influx of colonization and immigration from around the world. Food is a unifier across its multiethnic demographics. South Asian laborers, first brought by the British in the early 18th century, distinctively influenced the region’s cuisine by adapting and mixing their traditional recipes. During the end-of-the-year holidays, particular foods are cooked with fervor. Here are five foods common during the festive season in Indo-Caribbean households.

Pepperpot is an aromatic meat stew simmered for hours in a richly seasoned molasses-like gravy. Various meats such as chicken, goat, lamb, oxtail, beef or pork can be used.

The meat is browned and cooked in casareep. Casareep is a thick brown sauce originally created by the Amerindian people of Guyana. Hailed for its antiseptic and preservative properties, casareep is the extracted and caramelized juice of bitter cassava root. It is believed that this dish was originally created as a means to preserve meat without refrigeration.

Pepperpot includes indigenous hot peppers such as the scotch bonnet or wiri wiri. Spices are added until the broth is reduced to a syrup. It can then remain at room temperature without refrigeration and is often served dipped in homemade plaited bread or alongside steamed white rice.

Indo-Chinese food was developed in the Caribbean through trade and the influence of the Chinese population. This unique dish fuses Indian vegetables and spices with Chinese sauces and cooking methods. Chinese and Indian immigration to the West Indies coincided with one another, creating a special twist on the already-popular Chow Mein dish.

Some recipes call for the additional marinating of meat in green seasoning, a customizable Caribbean blend of fresh herbs and spices that can include parsley, celery, thyme, basil, green onions and habanero peppers. The meat is sautéed while julienned vegetables, such as tri-colored bell peppers, cabbage, scallions and carrots, are folded into the pan. Unique is the usage of Chinese long bean, colloquially known as bora, which adds a crunchy kick. The mixture is then added to the boiled noodles and topped with cilantro or shallots.

Chow Mein is often a staple at Indo-Caribbean gatherings. It can feed many and is a prime example of a dish inspired by the Caribbean’s diversity.

Indo-Caribbean curries can also use allspice and green seasoning while traditional South Asian ingredients such as ginger and ghee are often omitted due to scarcity. During special occasions, thicker meats such as goat or duck are curried with potatoes. The meat is sautéed with spices, onion and garlic until it is bunjaled (cooked or fried down without any sauce). Water is then added to the mixture and left to simmer until the meat becomes tender. Curry is served with white rice or paired with homemade roti to sop the curry’s juices. One example of Indo-Caribbean curry can be found here at Alicia’s Pepperpot.

Stemming from South Asian flatbreads like roti and paratha, Dhal Puri is a rounded tortilla-like bread stuffed with a savory mixture of seasoned yellow split peas, known as dhal. The dhal is washed and soaked for multiple hours, preferably overnight. It is then boiled, ground in a food processor, and then seasoned with salt, black pepper, cumin, among other ingredients.

Separately, flour and baking powder are kneaded with warm water into pliable dough and divided into small round balls. The dhal mixture is stuffed into their centers and the sides are pinched to seal the edges. Rolling pins (called belnas) flatten the balls on a floured surface into larger circles. The dhal puri is then lightly brushed with oil or ghee and cooked over a cast iron tawa and then flipped to the opposite side.

When eaten, it flakes and the dhal adds texture to meals. Dhal puris are served with curries, chutneys or Caribbean fruit sours. They are also a quick and popular street food that line marketplaces, waterfronts and roadsides.

At first glance, it might be mistaken for a typical chocolate cake. One bite into its dense, moist texture instead reveals the much-loved Caribbean black cake.

Created from dark macerated fruits and caramelized burnt sugar, black cake is infamous at jubilant gatherings. The process is meticulous and begins with collecting and grinding or chopping dried fruit into a smooth paste, then soaking them in airtight containers filled with red wine or dark rum. Avid bakers soak the fruits for several months to a year!

Common fruits and nuts include raisins, prunes, cherries, currants and cashews. The fruit mixture is added to creamed cake batter with warm nutmeg, cinnamon, allspice and clove, while flour and burnt sugar are mixed in to obtain the desired color. Teaspoons of vanilla, almond and mixed essence help complete the recipe before baking.

Black cake immediately evokes the idea of celebration in Caribbean families. The warm smells are often reminiscent of  Christmas, while others remember it as a toast to a newly wedded couple. It is a special dessert crafted with love for the masses to enjoy at most cultural occasions.

As a bonus, I have to share this Easy Eggnog Pound Cake too! This is the perfect recipe for someone who wants to make a pretty dessert without all the work. Not to mention it’s also a stunner in a cake stand or dessert table, courtesy of Alicia’s Pepperpot.

Indo-Caribbean food is a blend of South Asian, Asian and Caribbean cultures. Noodles, curries and bread alongside adopted dishes native to the Caribbean from other ethnic groups are reflected in Indo-Caribbean foods. Together, they produce a myriad of cuisines that are especially displayed during the holidays. Their unique cooking celebrates the multicultural history of the region and exemplifies how people can come together to bond over the universal pleasure of food.

Fulfill your Desi Cravings With this ‘Indian-ish’ Recipe Book