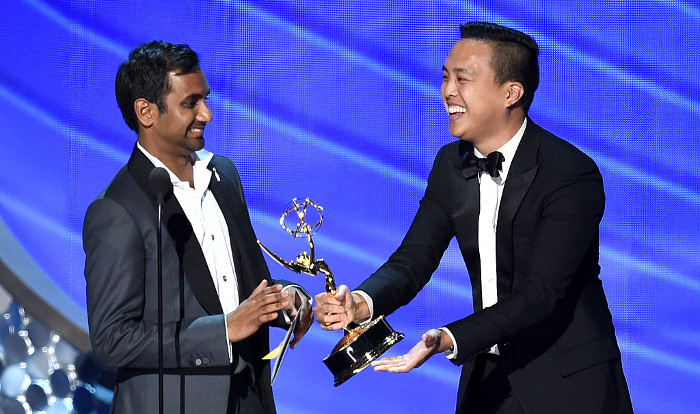 When Aziz Ansari’s “Master Of None” premiered on Netflix, one thing was for certain, the show was destined to be a big winner come TV award season. The series has taken home a Peabody, a Critics’ Choice TV Award, an AFI Award, and now a new trophy will join the shelves of creators Ansari and Alan Yang, a Primetime Emmy award.

Ansari and Yang took home the coveted golden statue on September 18 for writing the episode “Parents,” which both based on stories from their actual parents. (Funnily enough, Ansari’s real parents play his fictionalized parents in the series as well). There’s so much to be excited about when it comes to Ansari’s (and Yang’s) big win, and we’re planning on celebrating for a long time to come!

1. Ansari is now the FIRST Indian-American to win an Emmy in a Major Category!

Despite some incredible television, courtesy of so many South Asian actors, writers, and directors, Ansari becomes the first Indian-American to finally break through the barriers and win an Emmy in one of the major writing, directing and/or acting categories. He made history earlier this year for being the first South Asian actor to be nominated for an Emmy in the Lead Actor category! His big win is an Emmy for us all, and hopefully a sign of more to come!

2. Master Of None is Likely to Get More Viewership

There are still many people out in the universe who have yet to watch this incredible, hilarious, touching series. Now that Ansari has won an Emmy, maybe more will tune in. Even just a few more eyeballs will be better than nothing!

3. Ansari Becomes a Household Name (As If He Isn’t Already)

The guy has been selling out comedy tours, releasing hilarious stand-up specials, and appearing in some of the best TV shows and films for years, but winning an Emmy is definitely a big step in the right direction for an Aziz Ansari worldwide domination. It means he is recognized by the Academy for his contributions, further widening his reach. Everyone should know Ansari, he’s just that good.

4. Maybe More South Asians on TV will Get Emmy Love?

Mindy Kaling has been robbed for her amazing work on both, “The Office” and “The Mindy Project” for years. Could Ansari’s win open the doors for this fellow amazing South Asian talent? And actors like Kumail Nanjiani, Hannah Simone, Naveen Andrews, Aasif Mandvi, and Raza Jaffrey have been quietly stealing scenes left and right from their co-stars on many respected and well-liked TV shows.

And it’s not just Emmy love that these South Asian writers, actors, and directors deserve. All of these artists should be on the mainstream radar for fans, journalists and insiders in the industry. It’s time for representation and it’s time for more recognition.

6. He Just Plain Deserves It

This is obvious. From his work on “Parks and Recreation” and now his triple duty as writer, director, and actor on “Master Of None,” Ansari deserves all the love he’s ever gotten and more.

Congrats Aziz! We could not be more proud.