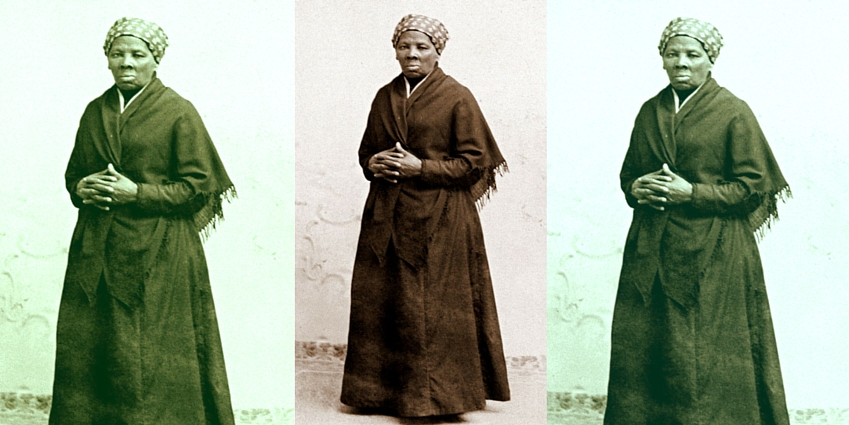 Women are coming—on our currency, that is, and it’s a pretty big deal.

That’s right! Women. On. Our. Money. OMG!!! I can hardly believe it’s going to happen but it’s true!

Last Wednesday, Treasury Secretary Jack Lew announced that Harriet Tubman, heroic abolitionist, and civil rights icon, will grace the front of the $20 bill, which Politico calls “a historic move that gives a woman prime placement on U.S. currency.” She’ll be replacing President Andrew Jackson, who will be moved to the back of the bill.

But that’s not all! Along with Tubman, various renowned leaders and figures of the women’s suffrage and civil rights movements will be added to the $5 and $10 bills!

And that means badass ladies in our wallets, purses, back pockets of our jeans, bras…badass ladies everywhere! Undoubtedly, these coming changes are incredibly momentous for women in the U.S. and here are seven reasons why.

First of all, Harriet freakin’ Tubman. The one and only, she escaped slavery and then WENT BACK 19 TIMES TO LEAD OVER 300 SLAVES TO FREEDOM VIA THE UNDERGROUND RAILROAD.

Damn girl! If anyone deserves to be front and center on our currency as a symbol of courage and perseverance in the face of adversity in America, it’s her. You go, Harriet!

We have our Lincolns, Hamiltons, Jacksons, and Benjamins but with Harriet Tubman comes an awesome new nickname for the $20, Tubs! For the first time, our currency will get named after a woman (even though, more things should be named after women) and that in itself is exciting! Get ready to collect your Tubs!

It is monumental that this historic decision recognizes a black woman, especially as black women have long been overlooked and have endured the worst treatment over the course of American history. #BlackGirlMagic is alive and well and it’s about damn time they were shown some respect!

This is the first time in over a century that U.S. paper currency will feature the portrait of a woman! The last time a woman was honored in this way was when Martha Washington’s portrait appeared on the $1 silver certificate in the late 19th century. Talk about way past overdue so can we just get a “HELL YEAH” that this is finally happening, again?!

As mentioned, significant leaders who fought for suffrage and civil rights will also be featured on the backs of the $5 and $10. In addition to Harriet Tubman, the slate of women includes Sojourner Truth, Lucretia Mott, Susan B. Anthony, Alice Paul, Elizabeth Cady Stanton, Marian Anderson, and Eleanor Roosevelt. Shoutout to these amazing women!

In 2014, Women on 20s, a non-profit, proclaimed “A woman’s place is on the money!”and then, made it their mission to put an iconic American woman on the $20 bill. Their campaign to achieve their goal included a poll in which the public voted from a ballot of 15 candidates. The winner? Harriet Tubman! Looks like they’ve been ahead of the game for some time, and even reached out to President Obama to make their request, so this is a big victory for them.

Women make up half of the nation’s population so it’s only fitting that we get our fair share of representation on our money, something that is used and seen every day. This kind of visibility for women can and will go a long way as a constant reminder that women have made great contributions to our society in all aspects of life and will continue to do so. Who run the world?

Of course, there are a few drawbacks to this. The redesigns of the bills won’t be revealed until 2020 and will not be distributed widely until much later in the years to follow, perhaps another decade later, considering the government will change and distribute the new $10 bill first, so there’s quite a bit of a wait. There’s also something to be said about how women are unable to have their very own bill, not to mention that Harriet Tubman, ex-slave and abolitionist, still has to share her bill with slaveholder Andrew Jackson–the irony. And then, there’s the fact that plenty of other countries have already placed the image of women on their currency for years now while we’re still waiting.

Well, Rome wasn’t built in a day and we can’t overturn the patriarchy overnight either. Baby steps for America then.

Still, we celebrate! Change is coming and it is good. See y’all in about 20 years when my Tubs come in!