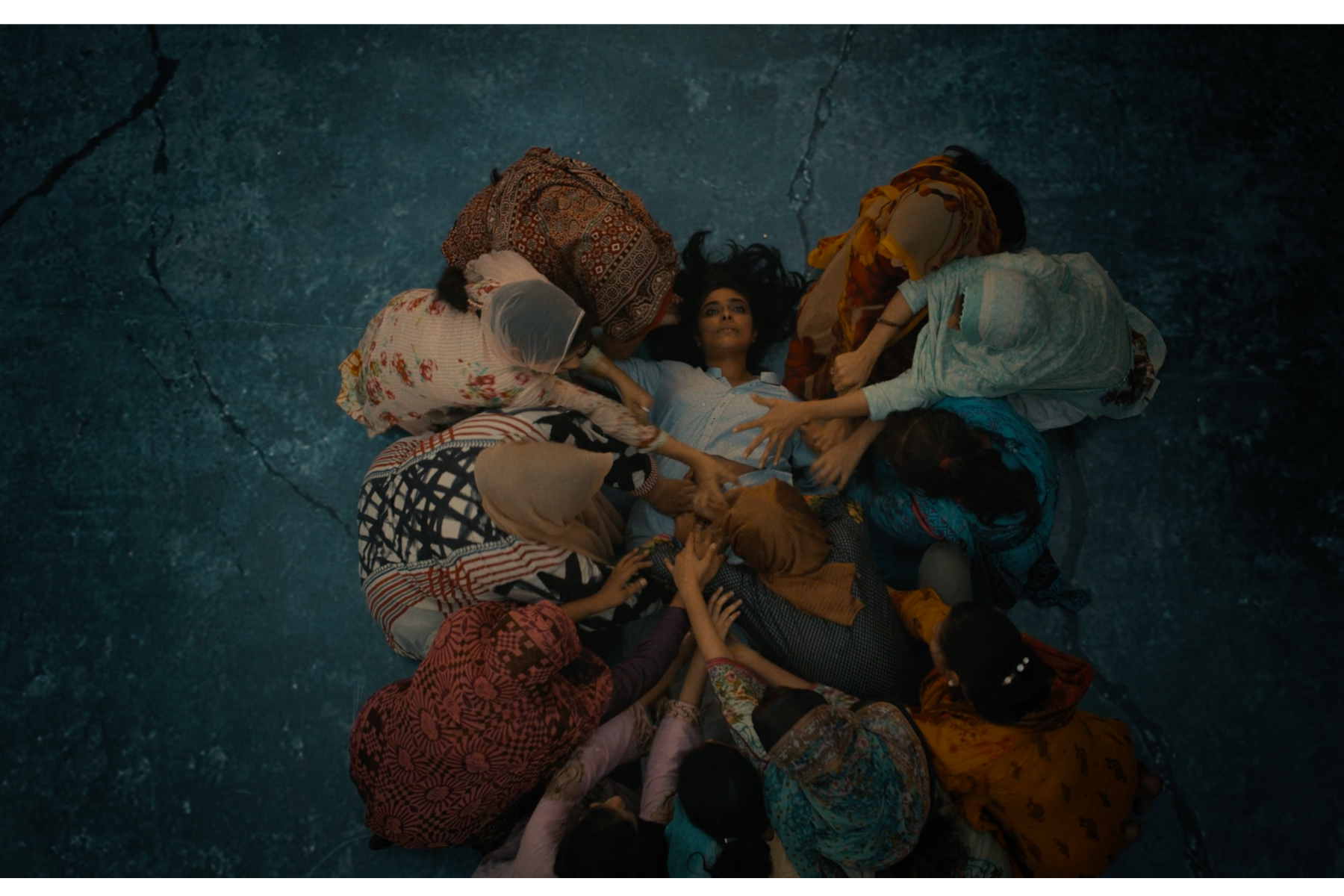 This review contains spoilers for all 10 episodes of Churails.

I hung up the phone to British-Pakistani Asim Abbasi, my mind still racing with questions about his new Zee 5  web-series “Churails.” I was intrigued, curious, confused and amused. He said the show was first of its kind for Pakistani television. It certainly seemed like it, judging by the trailer. But is representation really one of the core themes of the show? Does it really include a variety of minority groups and the issues they face, placed front and centre at key points during the narrative?

The opening catharsis for me was to see “Churails” central characters in Karachi’s familiar streets. I immediately felt a connection. Will this show really make Pakistani women feel seen? Are they really (and some would say finally) given a chunk of the digital sphere which truly encapsulates and represents their struggle?

Abbasi opens the storyline with some of Pakistan’s leading lights — Sarwat Gilani Mirza’s Sarah — a lawyer turned “perfect” housewife, Yasra Rizvi’s Jugnoo – a “disgraced” wedding planner (who has an obsessive relationship with alcohol which nobody seems to address), Nimra Bucha’s Batool – an ex-convict who served time for ironing out her husband’s existence (in more ways than one), and Meher Bano’s Zubaida – a burka-clad, after-school boxer.

The first episode works to establish the four principal characters together and explore their relationship to the world around them, but it does not thoroughly fulfil this vision. Rather, what develops is a slightly fragmented narrative that does not completely create the sense that they act realistically in line with expectations. This mainly arises from a lack of pragmatism in some of their responses to the actions of others – particularly Sarah – whose reaction to her husband Jamil’s infidelity does not feel entirely grounded in reality. I wanted – expected – her to kick up an earth-shattering fuss. Instead, we experience her quiet, almost prepared-in-advanced tears, followed by proof of Jamil’s online rendezvous spanning from Larkana to Los Angeles being sent off to the printer.

That same night, Zubaida is outed for boxing and Tindering after-school by her little brother, which leads to awkward emoji-explaining and endless chappal-flinging. Batool helps her escape to Jugnoo’s where she works as a cleaner, and thus begins the journey of the fantastic four.

Jamil’s infidelity and Sarah’s confrontation leads him to invest into her undercover detective agency, “Churails.” I personally like the “S” after the Urdu word instead of doubling it as “churailein.” Perhaps the slight symbolism is Abassi’s ode to both sides of the income spectrum.

We’re then introduced to baby churails: a band of hackers, sex workers, ex-convicts, transgender women and small-town dreamers. These women are the crime-solving masterminds behind every case; so much so that the leading ladies sometimes get overshadowed in comparison.

The show also seems to be in a constant rush. The rush to move the plot forward, to move to the next big case, societal taboo or dodgy decision, without always paying proper justice to the current issue at hand. This is where “Churails” creators rob us of the opportunity to truly connect with each storyline. For example, I was still reeling from Sarmad Khoosat being cooked and devoured nihari style by Sania Saeed, when almost in the next scene Batool attempts at taking her own life. A cliffhanger that did not come as a welcome surprise.

Having said that, Ehtesham and Shehnaz Khalid’s narrative is one of the most powerful pieces of TV direction and scriptwriting in recent memory. And to pick Sarmad Khoosat – our national treasure – to portray a closet gay husband is a fitting and poignant choice. However, it is here that “Churails” arguably unravels slightly, with that episode raising more questions than it answers. Why does Batool out a man to his wife in a moment of heat and prejudice? How does protecting a man from his wife finding out about his sexuality fit into the “wronged women looking to avenge themselves” narrative? Why does Shehnaz seemingly go off the rails in her response at one moment, but is calm and in control while being questioned by the police in the next?

Unfortunately, one of the show’s weaknesses is that it is hard to discern whether these scenarios arise as a result of well-intentioned moral complexity within the characters, or are further examples of the occasional inconsistency with which they are treated.

One of these key inconsistencies is Batool equating homosexuality with paedophilia – a comparison which seems intentionally placed to shock the audience with its extremity and prompt self-reflection in any that might hold similar views. This comparison is somewhat hollowed by the fact that two of her best friends and ex-jail buddies are in a same-sex relationship; a strange moment that viewers cannot quite reconcile as an act of emotionally charged fallibility, but instead plainly written hypocrisy. A similar act happens in episode three, where Sarah falters at the thought of wrongfully charging a man for a crime he didn’t commit in order to protect Sheila, one of her employees.

On the positive side, the show further takes us through well-realised dark twists and turns when Sarah’s second shot at her marriage, and Jugnoo’s almost-reconciliation with Ifti Chachu, come at a heavy cost, with the revelation of Jamil and Iftikhar’s involvement in sex trafficking and leadership in a post-colonial men’s cult (which almost gets Zubaida killed). The symbolism of Jamil’s wolf mask over a shalwar kameez directly facing Sarah’s burka-clad badassery when she confronts him is a fantastic way of depicting a “wolf in sheep’s clothing.” Top marks for semiology.

Similarly, it also portrays how powerful people often become torch-bearers of abuse, such as the show’s jalwa radiating CEO, Sherry. A woman in power becomes a reflection of the very man who passed on the exploitation torch to her. Some may say it’s a sweeping generalisation…one, that more often than not, sadly holds true.

Nevertheless, at times “Churails” is guilty of presenting the viewer with a sort of ‘thematic soup,’ where a multitude of issues are raised and often not fully done justice. One could even argue that their inclusion is tokenistic, with every episode throwing in a mix of more plot threads related to gender (in)equality, domestic violence, infidelity, abortion/body autonomy, prostitution/escort rings, teenage pregnancy, racism, colourism, transgender rights and attempted suicide. While it is undoubtedly ambitious to try to interweave a plot with all of these threads, the lack of time to explore these issues in any meaningful capacity detracts, rather than adds, to the impact of the show’s overall message.

This aside, “Churails” still is a mammoth step for the representation of a range of minorities who have never commanded any airtime on Pakistani television. Asim Abbasi has started a movement and a dialogue — an opportunity rarely awarded to Pakistani (and other South Asian) women. These are stories of women around us – raw, vulnerable, strong and powerful – stories they rarely get the chance to open up about.

Many talented newcomers grace the screen with imperious performances, which is a testament to the director’s passion for working with emerging creatives. The cinematography is beautiful, deploying a mad palette of colours to truly capture the spirit of Karachi. And when Misha Shafi’s “mein” is played in the background during the closing scene of a crucial episode, the obvious reference to Pakistan’s #metoo movement was cathartic, welcome, and at the apex of “Churails” power to ambitiously break new ground.