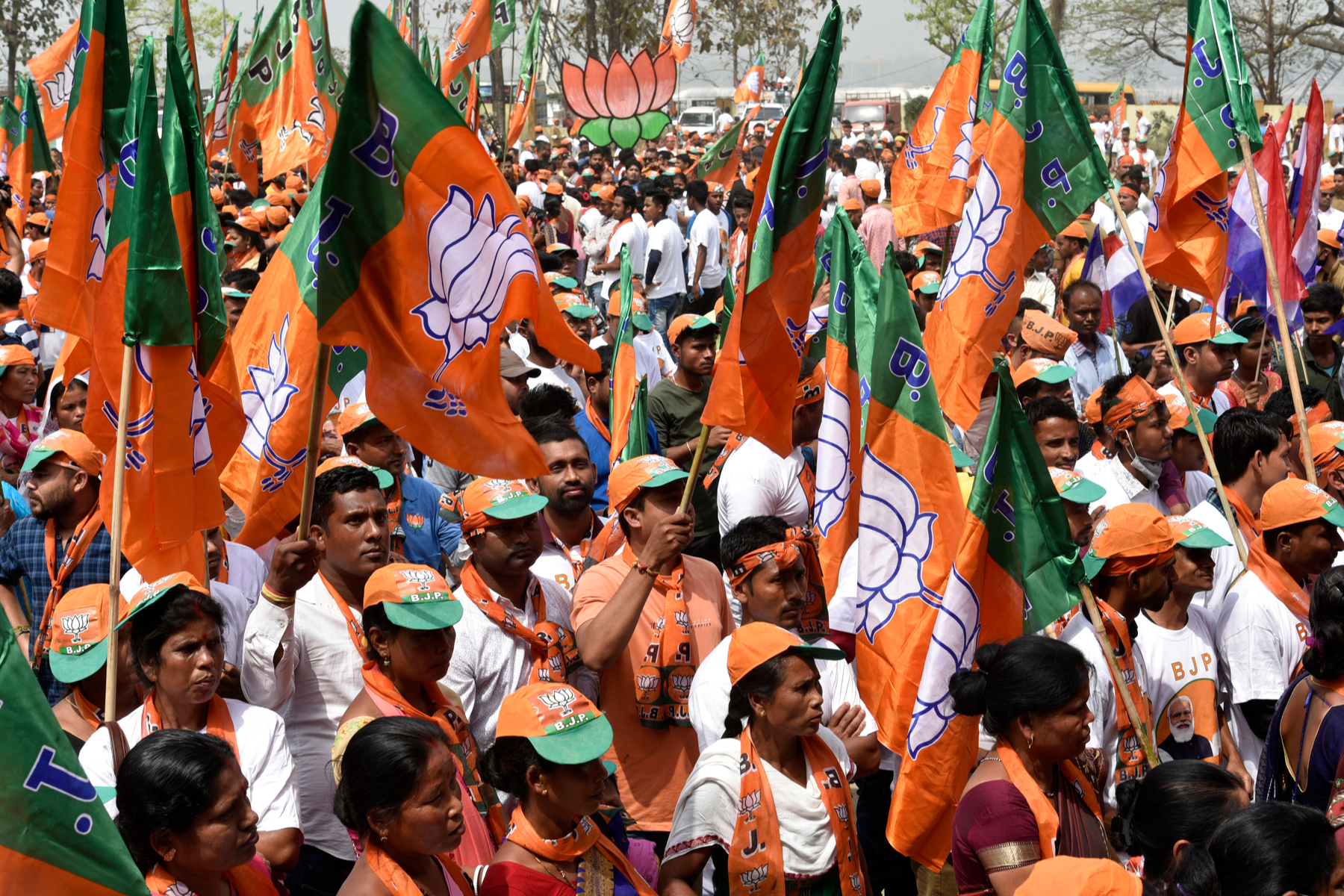 This past September, social media was flooded with backlash against an academic conference entitled “Dismantling Global Hindutva: Multidisciplinary Perspectives.” To those unfamiliar with the subject, the conference appeared to be a typical academic event: keynote speakers, hour long zoom sessions, university affiliations, and scholarly papers.

Sponsored by over 49 universities across the world, a three-day global conference titled ‘Dismantling Global Hindutva: Multidisciplinary Perspectives (DGH)’ aims to examine the ethno-nationalist ideology’s reverberations in India and the world.https://t.co/FrpE8f8E7x

What made this conference noteworthy was the level of outrage and media attention it attracted. Organizers and speakers received death, rape and violent threats, and universities affiliated with the conference received bomb threats. Opponents of the conference sent over one million emails to universities demanding the conference be condemned, claiming the conference was anti-Hindu or “Hinduphobic.” This conference was prompted by the growing backlash and threats that academics, activists and journalists have received for speaking out against Hindutva and the growing Hindu nationalist movement. It was intended to explore the history and evolution of Hindutva and covered topics including caste oppression, Islamophobia, gender and sexual politics, persecution of minorities in India, and connections to white supremacy.

While this conference was the first organized event intended to combat the Hindu nationalist movement, flare ups between proponents and opponents of the movement have been common in recent years. The large-scale backlash this conference attracted speaks to the larger polarization and political divide that exists amongst the Indian diaspora.

What is Hindutva and the Hindu nationalist movement?

“Hindutva” refers to an ideology which aims to “define Indian culture in terms of Hindu values” born almost a century ago. Hindutva is championed by Hindu nationalist groups that believe that India, constitutionally a secular country of numerous religions, should be an ethnic Hindu state. Founders of the Hindu nationalist movement are said to have been inspired by the fascist movements led by Hitler and Mussolini. Today, the Hindu nationalism movement has been associated with incidents of violence against religious minority communities in India, such as Muslims, Sikhs and Christians and has been known to promote policies that that are homophobic, misogynistic, sexist and casteist. Those who have publicly spoken out against this movement, including journalists, activists and academics, have been subject to violence, death threats and online attacks.

This Hindu nationalist movement has been primarily led by a political organization known as the Rashtriya Swayamsevak Sangh (RSS). While the movement was born in India, Hindu nationalist groups continue to broaden their influence around the world and amongst the Indian diaspora. “Sangh Parivar,” an umbrella term that refers to a network of subsidiary organizations connected to the RSS, appears to be well funded and organized. Organizations known to be connected with the RSS include Hindu Swayamsevak Sangh (HSS), the largest U.S.-based presence; the Coalition of Hindus in North America (CoHNA); and the Vishwa Hindu Parishad of America (VHPA). Two organizations that claim not to be affiliated with the movement include the Hindu America Foundation, which led an email campaign against the conference and held an event appearing to be in response titled “Dismantling Global Hinduphobia,” and the Hindu Students Council, which took to Twitter to protest.

The upcoming “Dismantling Global Hindutva” Conference is a smokescreen for #Hinduphobia. Nothing else.

The RSS is interconnected with the majority political party known as Bharatiya Janata Party (BJP), of which Prime Minister Modi represents. Modi’s government has faced harsh criticism for pushing a Hindu nationalist agenda and for creating policies that harm religious minorities and discriminate based on caste. Most notably, Modi’s controversial citizenship law was seen to discriminate against Muslims, and his recently repealed agriculture laws sparked massive protests from Sikh farmers. His continued policies and rhetoric have been criticized as sparking violence between religious groups. Modi’s government has on numerous occasions silenced journalists and activists who have used their platforms to criticize his government. As a result of these actions, Modi’s government has drawn concern and criticism from human rights groups and other governments. The Freedom House downgraded India from “free” to “partly free.” Modi’s government has created a deep polarization in political ideologies both in India and amongst the Indian diaspora.

Academics have been a frequent target of Hindu nationalist groups for speaking out against the Hindu nationalist movement and the Modi government. These include professors of history, South Asian studies and religious studies. Some of whom have published work that has been critical of the caste system, religious stories, or historical moments from an academic perspective, but not of the Hindu nationalist movement. One academic who has actively engaged with her critics is Audrey Truskche, Director of the Asian Studies program at Rutgers University. For years, Truskche has faced both death and rape threats after criticizing the Modi governments policies and for her examination of misogyny in religious stories. She is currently being sued by Hindu American Foundation for defamation, after tweeting an Al Jazeera article that called for an investigation into Hindu nationalist groups that received COVID relief funding. Truskche is only one example of the alarming attacks academics and activists have faced in recent years. In response to this harassment, a group of academics and activists formed the South Asia Scholar Activist Collective (SASAC), a resource group which provides a Hindutva Harassment Field Manual and other resources for those targeted. In an op-ed published by The Washington Post, the organizers believe that the Hindu nationalist movement is a “common threat that is being waged against academic freedom and against freedom of speech and thought in the U.S.”

“Organisers and speakers have received death threats, threats of sexual violence, and threats of violence against their families. Women participants have been subjected to the vilest kind of misogynistic threats and abuse and members of religious minorities associated with the conference have been targeted with casteist and sectarian slurs in the ugliest sorts of language.”

Poet and caste-activist Meena Kandasamy, who has been a target of Hindu nationalists for a decade for her poems and for speaking out against caste discrimination received harassing messages on Twitter and Instagram threatening her child. HSS called for universities to withdraw their support and a number of participants ultimately withdrew from the conference for fear of being barred from visiting family in India or being arrested if and when they did arrive in the country.

The term “Hinduphobia” was used in much of the rhetoric opposing the conference and has previously been used against those who speak out against the movement. Academics and activists have fought back against this claim and believe Hindu nationalist groups create a false narrative to silence dissent. As part of the SASAC field manual, members explain why they find the term “Hinduphobia” problematic.

While racism and xenophobia against South Asian Americans who are Hindu is a real problem, “’Hinduphobia’ rests on the false notion that Hindus have faced systematic oppression throughout history and in present times.”

The term “Hinduphobia” also attempts to compare the experiences of Hindus to those of Muslims or Jewish people. “The anti-Semitic ideology of Nazism led to the Holocaust. Islamophobic [sic] foreign policies over time resulted in the killing of Muslims across the world, including in South Asia, as well as the recent anti-Muslim ban of the Trump administration. Anti-Hindu bias, on the other hand, cannot be easily linked to casualties on such horrific scales.”

Further, SASAC members believe that the language used by Hindu nationalist groups appropriates the language used by grassroots organizations fighting racism. Conference organizers and critics of Hindutva have been clear to differentiate between the Hindutva ideology and Hinduism as a religion. They view Hindutva and the Hindu nationalist movement to be an extremist perspective that does not represent Hinduism as a religion.

While tensions between political ideologies within the Indian diaspora have existed for decades, recent changes such as Modi’s rise, the use of social media and academic dissent have created a deep polarization. These tensions will continue to rise with the recent events of violence in Bangladesh. The Hindu nationalist movement appears to be growing and expanding its influence into U.S. politics as more supporters of the movement run for political office and contribute to American political campaigns. The “Dismantling Hindutva” conference could be the first organized act in protest of this movement, and time will tell if organizers are able to strengthen support against what appears to be a well-organized and well-funded movement.