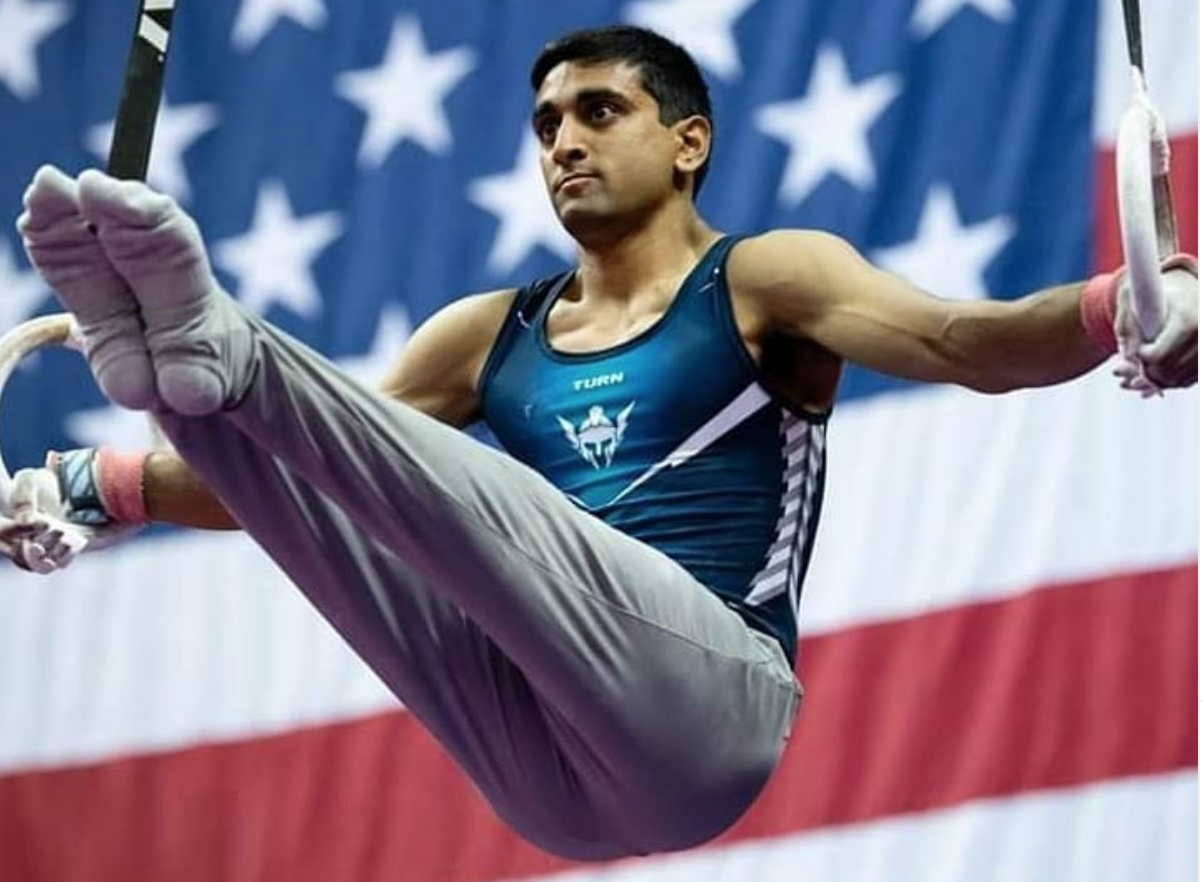 Akash Modi is a prodigal child of every desi parent’s dreams: he’s a scholar AND a world-ranked athlete. Not only is he currently pursuing a master’s degree in mechanical engineering from Stanford University, but he is also a world-class elite artistic gymnast who has his eyes set on making the U.S. men’s gymnastics Olympics team at Tokyo 2020.

After facing disappointment by being selected an alternate for the Rio Olympics in 2016, there is a good chance Modi will get a second chance at achieving his goal of winning an Olympic medal, as he placed third all-around at the U.S. Gymnastics Championships in Kansas City last month.

Modi is currently training in Colorado Springs, CO for the World Team Selection Camp happening later this week, where a successful performance will allow him to earn a spot on the US national team to compete in Stuttgart, Germany in October.

We got the chance to talk with Modi during his busy practice schedule, and here’s what he had to say about representing the desi community in the gymnastics world, and preparing for the 2020 Olympics.

Tell us about your family background and history with gymnastics. How did you get into the sport?

The coach thought I was good and so, gymnastics eventually turned into something more for me. In fact, a year or two after I started, I found out that my cousin Raj Bhavsar was also an elite gymnast (who has two skills named after him!) and was an alternate at the 2004 Olympics. Realizing that my cousin was that good pushed me to continue gymnastics as well — I thought, ‘if he could do it, why can’t I?’

Well, every kid in gymnastics starts out thinking they want to go to the Olympics, so I knew I wanted to compete at the Olympics pretty much since I started. But it was in 2011 at Junior Nationals where I ended up getting second because I had a good meet and I realized that I was up there. Every since then, I have become more confident in myself and push myself to be closer to the top guys in the world.

Former Cardinal Akash Modi finished third overall at the 2019 #USGymChamps and has been selected as one of eight members of the 2019 @USAGym World Championships Team Squad!#GoStanfordhttps://t.co/mtT5RbAoDW

What keeps you motivated?

I just love gymnastics and I enjoy every minute I’m in the gym, even when I’m complaining and everything hurts. I’m going to make the most of the opportunities that I have. Men’s gymnastics is just getting harder and harder to the point where you need hard routines, so the average age of the Olympic gymnast is going up and up every year. I’m 24 and in the middle of the pack in terms of age, but the US team overall is definitely on the older side compared to other countries. I’m just trying to keep up with the other guys that are the competition.

Who are your role models, both in life and in sports?

I try to follow Raj’s path the most, but I pull from everyone else who surrounds me. I try to pull qualities from my mom, dad, sister, and my teammates at Stanford. I look at what they did right and try to follow them in everything that I do.

You’re graduating from Stanford with a master’s in mechanical engineering. How did you balance gymnastics with your education?

I’m graduating with a master’s degree in December after completing two more classes in the coming quarter. For me, gymnastics and my education go hand in hand actually – I struggle to just do gymnastics because my mind gets too focused on it, so I need something to get my mind off of it. In fact, since I wasn’t in school this summer, I got into cooking. I always need something else to do to not think about the stress and the gym. Getting my master’s is actually a nice thing because I’m taking classes that I enjoy so it’s been fun.

One day down, one to go! Great first day here in Boston. Can't wait to put on a show on Saturday! #uschampionships

Apart from being an Olympian, what are your career goals?

I still don’t have a strong answer, but definitely something in the mechanical engineering field. I’m only 24 and not really thinking about the future right now, even though people always asking me what I’m planning on doing next!

How do you want to be remembered in the sport of gymnastics? What do you think you would add to the US Olympic team?

I want to be remembered the guy you can always count on — you can put him up and he’s always going to do a solid routine for you, no matter what.

One of my strongest traits is that I get nervous but I’m good at hiding it. I did a lot of deep breathing and yoga with my mom at home so I’m good at getting my heart rate down very quickly so I don’t let my nerves get the best of me. At worlds last year, I had never experienced nerves like I did there, but I was still able to remain calm. So being able to bring the general nervousness of the team down would be good (along with great gymnastics, of course).

Describe your current daily routine. What goes into preparing for the Olympics?

During the school year, I wake up around 7:45 a.m. I do about 5-15 minutes of meditation and then eat breakfast, which consists of 6 eggs. I am a vegetarian and need a high protein diet, so I do this everyday. I then go to gym at 9 a.m. and practice my skills until 11-11:30 a.m. I try to get the bulk of what I need to practice done during this time. Next is lunch, followed by class. I then go back to the gym around 3-3:30 p.m. to finish up whatever I didn’t get done in the morning. I eat dinner at 6 p.m., do my schoolwork if I have any or play video games, and then head to sleep around 10:30-11 p.m.

The road to Tokyo is an intense one. The World Championships Selection Camp is this week, and I need to make the team in order to compete in Stuttgart in October. My mindset for now is to just do well this week and in October if I make the team. October to December is the last time that we have to work on new skills, add new skills to our routines and make them harder. As a team, the US is lacking in difficulty of routines so there’s been a push by the USA Gymnastics organization for us to add new skills to our routines to compete with Russia, China, Japan.

In February, there is the Winter Cup Nationals, which is another national competition. This is the first stepping stone towards the Olympics. US Nationals are in June and that’s where official Olympics trials start. Three weeks after that are the actual Olympic trials, where the team will be narrowed to four guys who will compete in Tokyo.

I’ve added a few things to my routines over the past year to prepare for the Olympics. I have 3 new upgrades I’m looking to add on the floor exercise, vault, and parallel bars. They’ve all been very close but not ready. I think I’m going to focus on vault the most because our national team seems to be the weakest in that event.

Sitting in 3rd after a good day 1 of competition, but lots to improve on for Saturday! ? @allisoncheng_a.c @turngymnastics #USgymchamps

I’ve never really thought about how much of an impact I’m going to make in the community. Growing up, it was just my friends making comments about how good I am at gymnastics and how I was the only Indian kid they knew doing it. Over the past few years, I’ve seen an uptick in the number of Indian kids doing gymnastics and making junior national teams who have the potential to do great in the future. Their parents come up to me and say that I’ve been a great inspiration, which is kind of weird because I just felt like I was an Indian kid doing what I love and now I get to be a role model. I feel like I’m passing on the torch that Raj gave to me because we’re pretty underrepresented here in the gymnastics community.

You know, it’s typical of Indian parents to question why I don’t have a job yet and I feel that pressure, but at the end of the day, I’m doing what I want to do. I’m getting a master’s degree from Stanford and I have the rest of my life to figure things out. I’m not too worried about that stuff right now. My dad just told me that when I was growing up, he just dreamt of me going to MIT and joining their club gymnastics team, but since I got better, he actually thought I could get a scholarship and go to Stanford or something! My parents also get the benefit of me being a gymnast by getting to travel and seeing me compete at these meets, so I’m just really happy to have their support, especially through all the sacrifices they have made for me to get to where I am.

What advice do you have for someone looking to get into elite gymnastics?

My philosophy that I take in every day is that I try to improve on something every single day. So if I’m having a bad day in the gym and can’t do something difficult, I’ll focus on something small, like my toe point. Doing one positive thing every day for the past 18 years definitely adds up, which has helped me to get to where I am.

I feel like Indian kids have the pressure of their parents and Indian community to be perfect and achieve a certain standard, making it hard to keep positive. It’s all about the mindset — you have to try to find something positive out of every day.

Songs on your current hype-up playlist:

I’m not much of a music guy. I do more video game stuff before a competition to get my hands warm and get me thinking. My favorite video game is Super Metroid — it’s a video game from 1994! I also love any Mario game.

I like to get something different every time, but the #1 item is the Crunchwrap for sure.

She’s insane and she’s one of the best gymnasts of all time, no doubt. And she’s super nice, too!

I like to ride my bike around Stanford so I can enjoy the outdoors, move around, and explore the campus and surrounding area.

Modi is certainly one to watch as the U.S. Men’s Gymnastics team selection process continues for Tokyo 2020. We can’t wait to see what incredible things he does next.