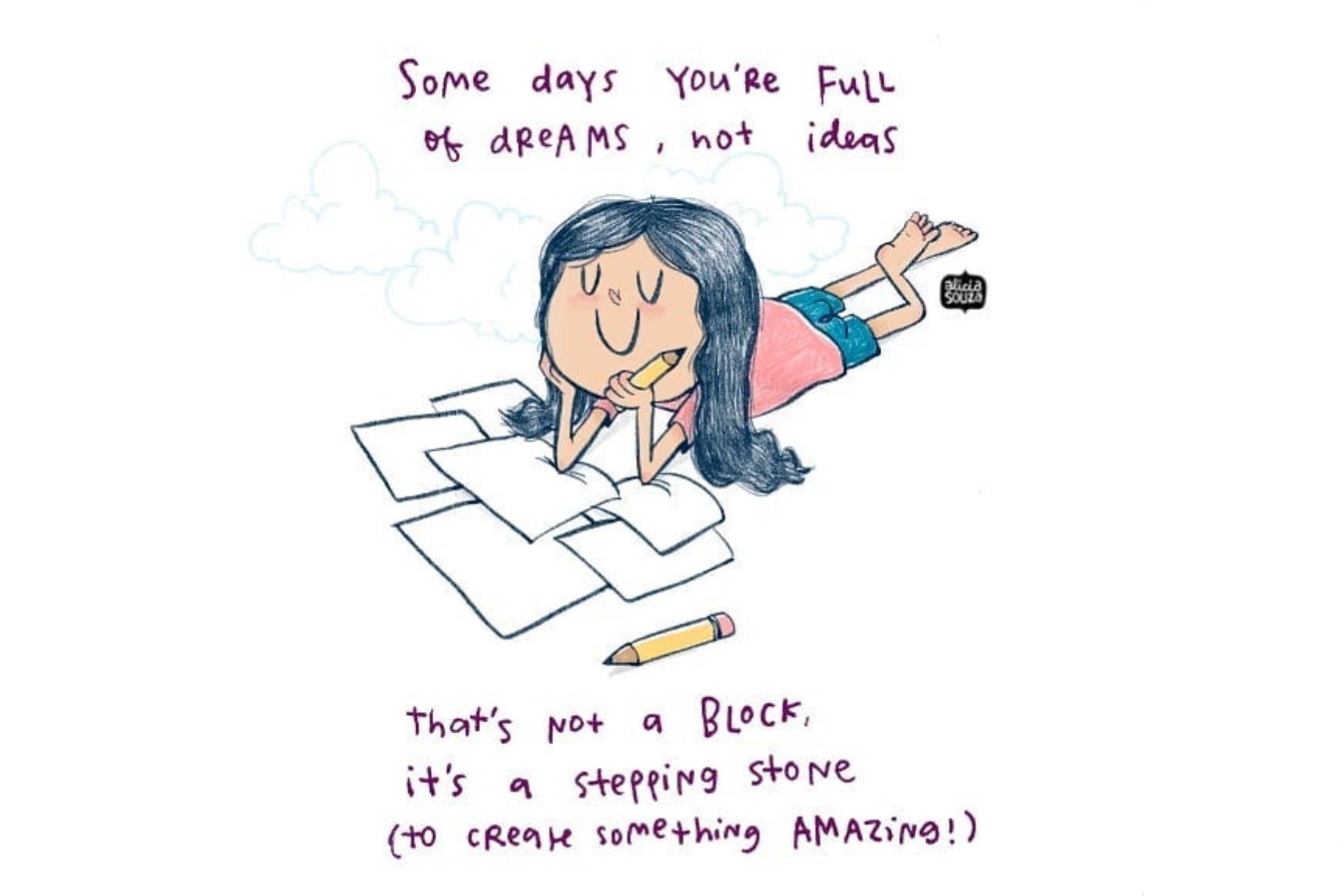 There are specific memories we associate with India. Whether it’s a sleeping security guard or the long life of a piece of clothing, it’s a journey from apparel to dust cloth. It might hit us in the face when we experience it for the first time, like tea vendors on the train yelling, “chai, chai, chai!” Or it might be more subtle—like candies instead of change at local shops. The different sizes (the plastic bag that holds all plastic bags), the shapes (a cycle helmet instead of an actual scooter helmet), or the sound (or in the case of Bangalore traffic, it would be called “noise/chaos”). These factors have a way of creeping into our hearts and settling in like the stray dogs on our doorsteps.

Comic artist Alicia Souza has brilliantly drawn 100 such situations in the series she calls Things I see in India that are super endearing. Posted on her Instagram and soon to be printed, her drawings offer nostalgia wrapped up in a shawl, as warm as the one an uncle covers his head with on his early morning walks.

“I was not brought up in India, but there were things that I found nostalgic every time we could come to India on holiday,” says Souza, explaining the inception of the series. “This wasn’t very often, and there were certain things I recall being excited about—like a rickshaw ride! Which is not fun if you’re doing it daily.”

“Only when you’re a tourist do you find it fun,” Souza continues. “Certain smells, certain sights, certain things are still dear to me—like a cow on the road.”

I give her a questioning look to which she laughs and exclaims, “I love it! I know that everyone hates them interfering with traffic, but I hope that never stops.”

But like her comic on “Sharing is caring,” Souza quickly adds, “I notice things when other people bring them up. They’ll say something I wouldn’t have noticed because of seeing it every day. And then I’d be like, ‘oh my god, that is so true.’ That’s where it started!”

Souza says she gets inspiration from what she believes people miss about India. She points out, “When you just move to India for good, you see so many things that people see daily, but if it’s the first time you see it—it’s amazing.”

A continuation of the series of the only photos I have with a belly that isn't a selfie in a bathroom mirror. 1) I'd genuinely just made cake and was eating it because I get to not actually know where it shows for three more months. 2) Family portrait minus Hen-o ? 3) Charlie was actually smiling at…ofcourse…George ?? ?: @georgeseemon ??

Her website sells products she has designed, from planners to magnets, and of course, book formats of her comics. You would think that she had been born with a pencil in her hand, but she says she was never an artistic kid. Her interest began substantially later.

Souza doesn’t call herself the artist of the century. Instead, she explains her work in a simple but profound statement, “Everyone stops drawing after a while. It wasn’t that I was good; it’s just that I continued.”

It is the simplicity of her comics that attracts people from all points on earth. Her Instagram platform currently has a base of 311K followers.

“The only thing that worked for me was consistency. I post every single day. Instagram isn’t something I browse. I consider it as part of my work,” says Souza. “When I started freelancing, I came from a time where there were actual physical portfolios. Because I didn’t feel like I had enough for a portfolio, I started on Facebook then switched to Instagram, and it’s been six years since!”

Souza believes artists will always have room to grow on social media. “We are at an age where we want to hear more. There’s space for anyone who is unique in their voice and what they are saying.”

She even did a series with Dove in Dec. 2019 on being you and being unique.

The comic artist is pondering over starting a kids’ brand. She thinks it’s the best time to do it, given that she’s pregnant with what she fondly calls her little idly—or, thatte idly. The Things I see in India that are super endearing book will launch in a few months, and Souza has already started planning next year’s calendar and planner.

“I am very, very busy. I’m not going to finish it!” Souza says with a laugh.