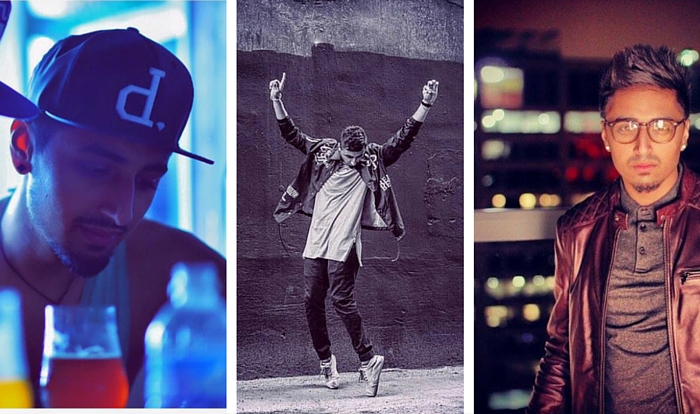 The following profile is part of the Urban Desi conference/concert series. Produced by Desi in NYC and presented by India.com, #UrbanDesi is a one-of-a-kind, two-day event in New York City featuring 20 global South Asian artists for an exclusive conference and a state-of-the-art concert in Times Square on March 24th and March 25th, 2016. For more information and advance tickets, visit UbranDesi.org. Use promo code BG2016 for 10% off. #UDC0216

Amar Sandhu discovered his musical talent somewhat by accident. One day, he was unabashedly belting out a song at his home in Dallas, Texas, when his father overheard him.

“He came out of his room to tell me I had a nice voice, which basically started building my confidence,” Sandhu said. “I just never stopped singing after that day.”

Today, the 26-year-old musician has released multiple hit singles. His impressive vocals and catchy pop fusion style have earned him thousands of fans and followers on social media. Sandhu is currently in the middle of an eight-city tour to promote his debut album, “New Era.”

“The tour has just begun, so I’m excited to meet new fans and that will honestly be the most memorable experience of the tour,” he said. “I can say I’ve been on a tour before, but this one is special because it’s coming off of my debut album.”

His latest work is already making a splash in the music scene. “New Era” features collaborations with artists including Pranna, Mickey Singh, and Zeshan. Sandhu said he was amazed to see the audience singing along during his performances, already knowing the songs by heart. He said that connection with his fans inspires his performances.

“I literally lose myself on the stage,” he said. “The energy of the crowd that I can connect with is amazing. It is such a surreal feeling I can’t even explain.”

When he’s not busy rocking the stage, Sandhu is in the studio collaborating with other artists and shooting videos for singles from “New Era.” He also uses his downtime to write and record new music.

“Before singing, I was a percussionist, so I can play the dhol, dholki, and tabla,” Sandhu said. “I do indeed write a vast majority of my songs as it allows me to really portray the emotion of the song I’m singing.”

When it comes to his signature musical style, Sandhu said he aims to create a fusion of his American and South Asian cultures. He said his taste is eclectic, and he can’t really point to a single artist who inspires him most.

“I’m American born and raised, but grew up listening to mainly Punjabi music, so I would say my style is a diverse mix up of east-meets-west,” he said. “I absolutely draw inspiration from both sides of the spectrum as well as a whole bunch of different cultures. Being born in America it’s cool being around all the different races and cultures out here.”

Sandhu said that unique perspective has allowed him to connect with first-generation South Asian fans.

“It’s very easily relatable meeting them, and we just have a sense of understanding each other,” he said.

The New Era tour runs through this April, and Sandhu already has his sights set on his next big project.

“I would love to be an artist developer and take artists under my wing and help guide them through some of the obstacles I have gone through,” Sandhu said. “Also, one day, I plan on making it in the mainstream music industry.”