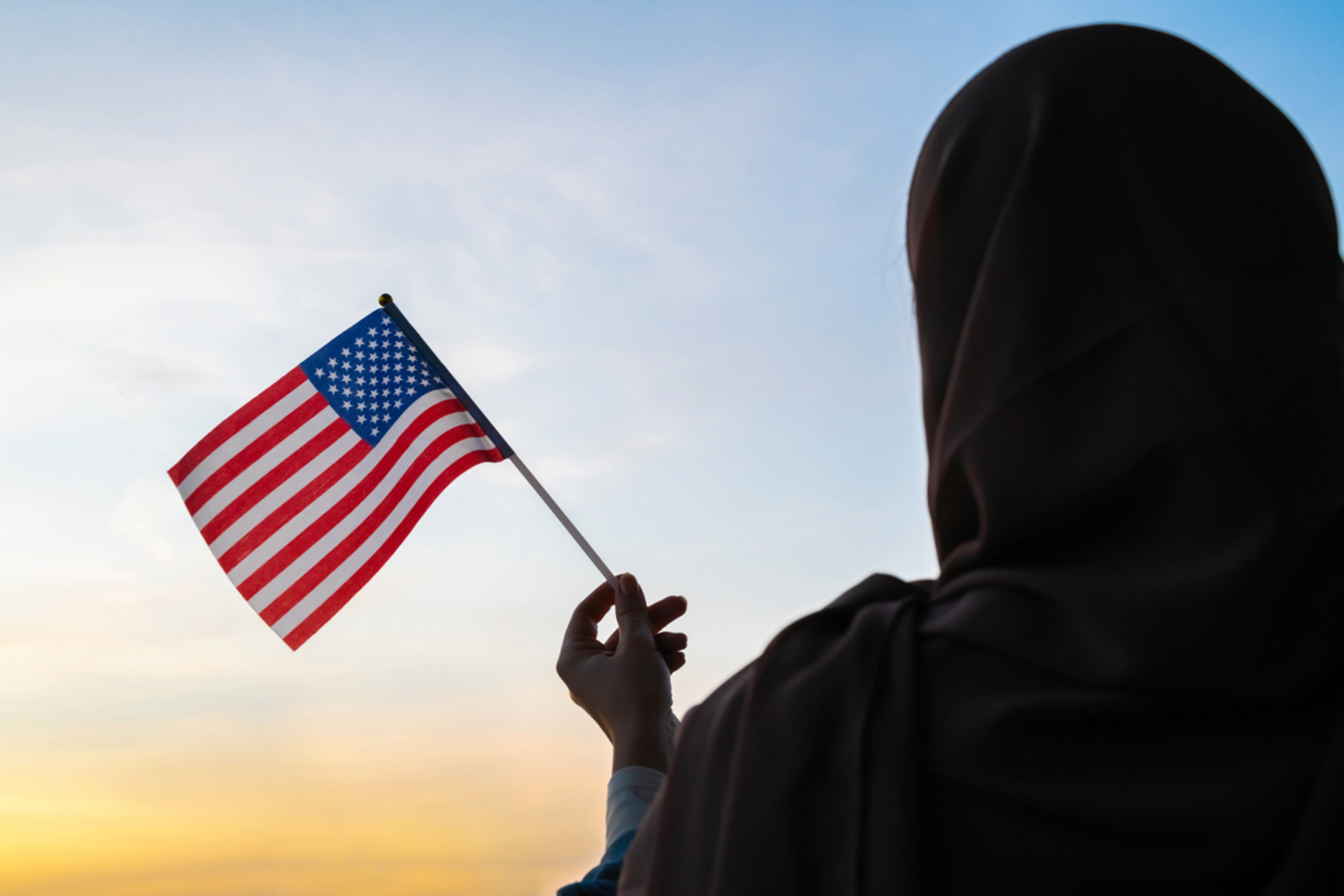 Silhouette of a Muslim woman | Photo by FTiare via Shutterstock

Growing up, I was not used to seeing my identity as a Muslim woman represented in American society. I yearned for a Muslim barbie doll, a Muslim female movie star, and, as I got older and became interested in politics, a Muslim female politician — but there were none to be found. The night that Rashida Tlaib and Ilhan Omar became the first Muslim women elected to congress was historic for Muslim women across America. It was our first time seeing people like us taking on such crucial roles in American politics, especially given the Islamophobic rhetoric of the Trump administration. Since this night in 2018, several Muslim women, some successful and some not, have stepped up to run for political office: Ghazala Hashimi, Abrar Omeish, Amani Al-Katabeh to name a few.

But how do Americans perceive Muslim women in politics, and how open are they to electing Muslim women? The 2020 Taking America’s Pulse Survey, designed by students at Cornell University, asks to what degree Americans think a Muslim woman would be able to effectively represent them in Congress, and the results, which are hopeful, suggest that more Muslim women should consider running for political office.

It is crucial to consider these results in the context of how Americans view Muslims. Muslims are often seen as violent, extremist and anti-American and Islam is viewed as being in conflict with democracy and American values. Especially when it comes to women, Americans believe that Muslims have outdated views on women and that Muslim women are oppressed by their religion and ultimately need to be “saved.” It is no secret that President Donald Trump has supported several policies targeting Muslims, including increasing surveillance of mosques and the Muslim ban, even going as far as saying “Islam hates us.” 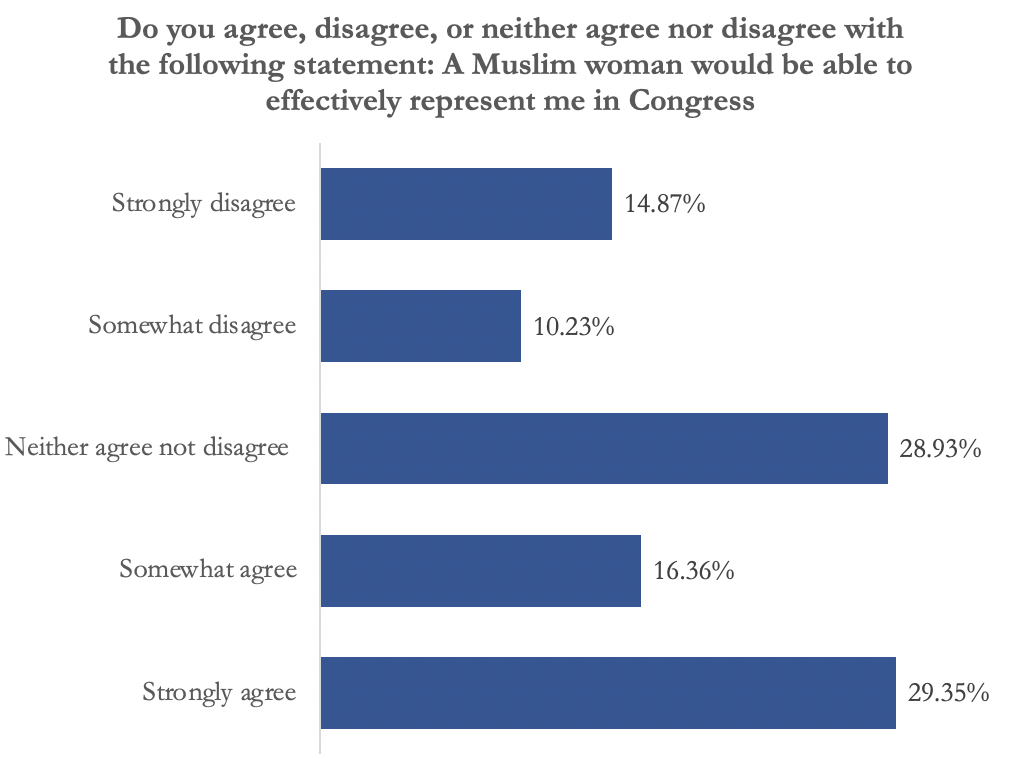 Considering this, the fact that respondents were twice as likely to strongly agree that a Muslim woman could effectively represent them in congress indicates a positive outlook for Muslim women who have their sights set on running for office.

So, which groups are most steadfast in their support for Muslim women in politics? According to the survey results, people ages 60+ are two and a half times more likely to strongly disagree with the statement than people between the ages of 18 to 29. This is in line with the known trend that younger generations have more progressive views compared to older people. Millennials and Gen Z are defined by their racial diversity and are more likely to express concern about discrimination and see diversity as a strength for society.

Additionally, Asian and Hispanic identifying respondents were more likely to strongly agree than White respondents at 63 percent and 40 percent respectively. This could be because ethnic minorities who have been historically marginalized in the political sphere want to elect more people that look like them and have lived experiences like theirs. Minorities want representation and there is more support than ever for women of color running for office, all of which shows hope for Muslim women.

Unsurprisingly, Democrats and respondents from metropolitan areas are also more likely to agree. These demographic groups appear to be in clear support of Muslim women running for office.

This is not to say that there is no alarming distaste for Muslim women in politics. The results showed that there are very clear party divides when it comes to this question. Half of Democrats strongly agree compared to only 10 percent of Republicans, and 30 percent of Republicans strongly disagree compared to a mere 5 percent of Democrats. Political ideology is a strong indicator of Islamophobia and Islamophobia is a key part of the GOP’s platform, so the survey results could be part of the larger trend of anti-Muslim sentiment from the Republican party.

On the other hand, there was no difference between responses from male and female-identifying respondents. One might think that women would be more likely to support other women, but other factors appear to outweigh female solidarity.

While it is disheartening to see that folks that are White, elderly, rural and Republican are less likely to agree, there are more than enough people who believe a Muslim woman could effectively represent them in congress, and there is 29 percent of neutral respondents that could be convinced.

The survey results are positive enough that more Muslim women should at least run for office. And if they do, maybe young Muslim girls will not have to grow up yearning to see Muslim female politicians on TV as I did.

Aleena Ismail is a Senior at Cornell University studying Information Science. She is the daughter of two resilient immigrants and a proud South Asian Ismaili Muslim. Aleena is passionate about social entrepreneurship, gender equity, and international development. In her free time, she enjoys listening to slam poetry, satisfying her sweet tooth with milk and cookies, and spending time outdoors.