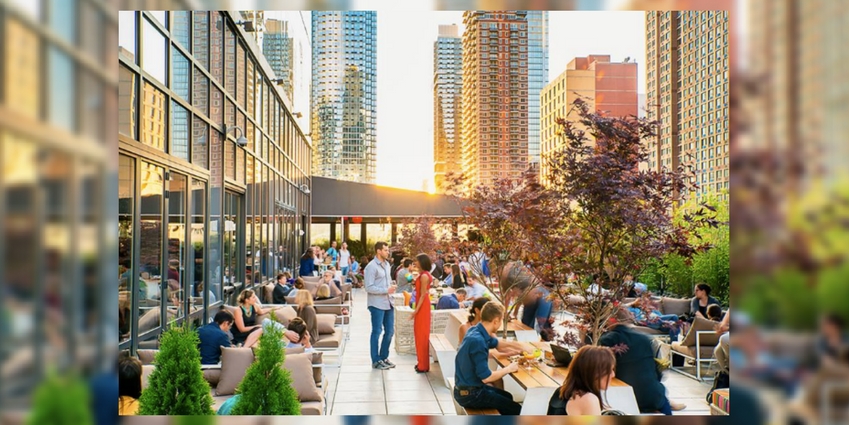 There are definite moments when I feel wealthy.

Today, I worked on the set of a video and photo commercial shoot where I was paid to pretend I’m having brunch and drinks to advertise a brunch and happy hour special for a hospitality brand. (We ate the brunch food and drank the drinks too!) I felt like I was paid to chill with other actors on set.

Of course, there is more to acting and modeling than “chilling” on set. There was some posing, fake conversation, fake cheers, some pretending to become infatuated with the actor near you or feign love.

I felt lucky today. I am so fortunate to have a gig, where I can just show up, be myself, and get paid for it. There are definitely times where I don’t appreciate my job as a model and actress enough. Today was one of those times where I realized I need to appreciate this more.

Although I felt so lucky and fulfilled today, I also realized that I’ve been slacking. My manicure was chipping when I got to set. The first few shots were “tapas” shots of my hands and a male model’s hands eating tapas. Because my nails were chipping, I didn’t do any hand modeling that day. Prior to the shoot, I was not told that I would be hand modeling, but as a model, I should know better. My hands should always be manicured.

When I was younger, I was never a high maintenance girl. Up until the age of 23, I had two manicures, ever. And those two occasions were my junior and senior high school proms. Beauty upkeep just wasn’t something I paid attention to when I was younger.

When I started competing in pageants when I was 24, I got in the habit of making sure that I was waxed, tweezed and manicured, every time I had to be in front of an audience or camera. I even perfected the art of doing my own makeup and was on an accurate-to-the-point-of-science nutrition and exercise regimen.

Something that I definitely took for granted when I had my nine to five job was that I had expendable income for all of the upkeep that I had taken on. Since leaving my job, my income has been in steady decline as I move farther away from the 9-5 life and closer to making a living freelancing. I’m getting called into auditions daily, sometimes a few times a day. If I have a job during the week, I miss out on these opportunities. Needing flexible time during the day makes it hard to commit to even a part-time job.

Although I feel like my freelance career is slowly but surely getting bigger, my bank account certainly isn’t.

Lately, I’ve been reverting to the old me. When I say the “old me,” I mean college-Sheena that was able to go an entire week without spending a dime. That includes not spending on upkeep.

However, back when I was working nine to five in nutrition, I didn’t have time for photo shoots. If I ever got a modeling job, it was a big deal! I would always make sure that my hands were manicured and that I was waxed, tweezed,and dieted to perfection, for every single occasion that I was in front of an audience or camera. And I wasn’t in front of a camera on a weekly basis.

Nowadays, I should be on point 24/7 because I have photo shoots weekly and auditions daily. Looking immaculate all the time will help me get work. I’ll admit that I’ve let go a little.

I have said things like, “People in the industry should know that most models and actresses are poor. I shouldn’t be expected to pay for my own manicures and bikini waxes if my gigs aren’t high paying gigs!” The flawed thing about saying this is that looking on point is a part of my job. It is something that I need to invest in to move my career forward.

[Read Related: Highs and Lows of Working in the Entertainment Industry]

I also realized that when I am on set, I often follow the cues of other actors and models on set. That is a mistake. Sometimes people are not as hard working and committed to their role as me. Sometimes I am on set with folks that are comfortable goofing off. I love modeling. There is no reason that I shouldn’t be fully committed when I am on set. Sure, sometimes running scenes can be slightly awkward, but I am there to model, not to socialize, nor to make sure that there is chemistry on set. If there is no chemistry, I just have to ignore the awkwardness and be the best model that I can be. It’s more important that my directors get good clips and photos.

Today I realized that I need to take what I do as seriously as the day I started. I need to look on point all the time, invest in myself and give 115 percent to every single thing I do.