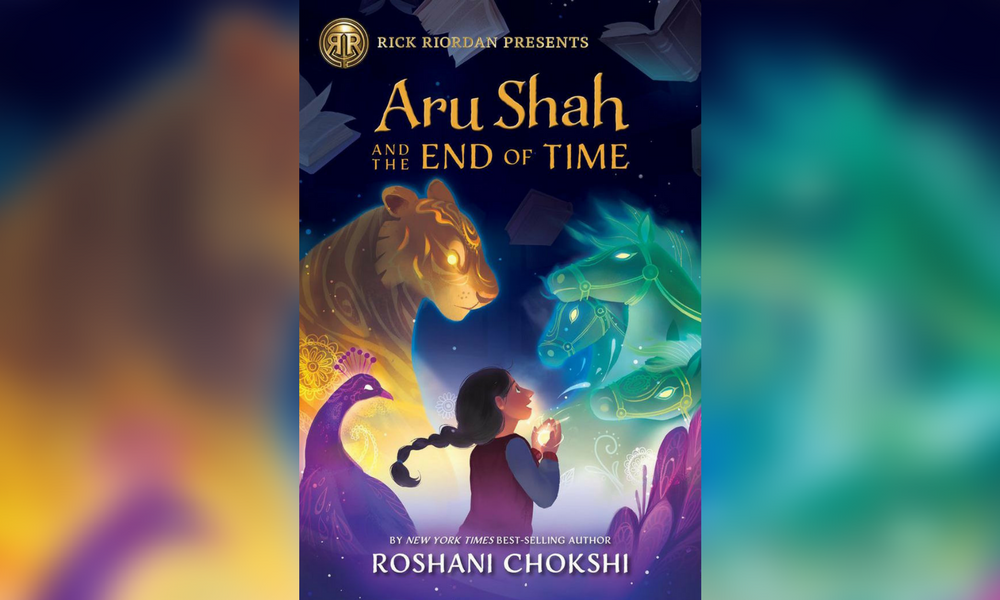 Hindu mythology is a vast, never-ending fabric rich with colors, dotted with countless interesting characters, embroidered with bright threads of drama, action, comedy, and moral conundrums. So far, Hindu mythology has been largely untapped, but no longer. Rick Riordan, the leader of the ‘mythology-fantasy-YA’ genre, had the good sense to turn over the Hindu mythology series to Roshani Chokshi with the debut of “Aru Shah and the End of Time,” after writing series based on Greek, Roman, Egyptian and Norse mythology.

“Aru Shah and the End of Time” is the first installment of the Pandava series, which operates on a unique premise. Unlike Riordan’s oeuvre, Chokshi’s series postulates that instead of demigods, the main characters are the reincarnated Pandavas from the Mahabharata.

The Mahabharata is one of two of Hinduism’s most revered religious texts, and is centered on the Pandava family. In the ancient time of the poem’s events, the Pandavas were a powerful family that ruled vast portions of India. King Pandu was the earthly father of five princes, who were boons given from the gods to his wives. Each of the princes had the skills and qualities of demigods (varying based on their divine parentage) and were the legendary protagonists of The Mahabharata.

In this novel, Chokshi takes advantage of reincarnation being built into the infrastructure of Hindu mythology and posits that each generation sees various reincarnations of the Pandavas, who are the heroes ready to save the world from any peril it might be in. People who didn’t grow up reading these stories might find all this backstory dense, but Chokshi’s breezy tone and reliance on Rick Riordan’s patented method of delivering exposition with a light touch make it easy to catch up in a hurry.

Roshani Chokshi’s biggest strength is her protagonist. Somehow caught up in this Pandava business is the titular main character, Aru Shah. Aru is a spunky 12-year-old who lives in Atlanta with her mother, the curator of the fictional Museum of Ancient Indian Art and Culture in a tiny apartment attached to the museum in question.

Aru Shah grapples with the struggles many people of South Asian descent grapple with in America, and in that is endlessly relatable. The duality of identity, reconciling the culture of her family with her own culture, trying to constantly win her mother’s undivided attention — Aru lives a complicated life. Forget fitting in, she’s just trying to survive middle school, and accidentally triggering the End Times is putting a serious cramp in her style. How she and her ragtag group of friends save the world forms the basis of the story.

Many historical and mythological characters play a part in the series, and each of them are presented in a modern fashion but still maintain their authenticity. Chokshi excels in the tiny details, imagining these immortal beings’ evolution over time and presenting those images with flair. It is quite the feat to write a ‘woke’ YA fantasy novel based in Hindu mythology that acknowledges the misogyny baked into ancient (and modern) Hindu culture, but Chokshi somehow manages to walk that tightrope. Just for that alone, this book is worth a read.

Aru Shah is an imperfect human, as all humans are, but she is a great example of a literary role model young readers of this generation need — plucky, brave, resourceful, and smart. It’s no wonder Paramount has secured the rights to turn the book (and potentially the rest of the future series) into a movie!

[Read Related: ‘Nina the Neighbourhood Ninja’ Proves Being a Superhero has no Bias in Gender or Race]

The dialogue is snappy, the pace is brisk, there are pop culture references of all kinds stuffed everywhere, the subject matter is refreshing, and what’s more, “Aru Shah and the End of Time” should be mandatory reading for all little Brown girls and boys of all ages.