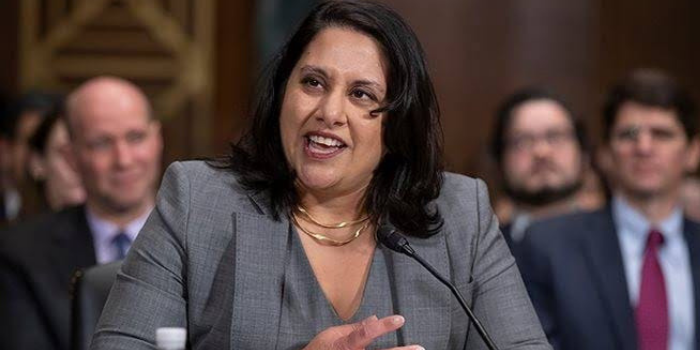 Earlier this month, the United States Senate confirmed Neomi Rao to the District of Columbia Circuit Court to replace Supreme Court Justice Brett Kavanaugh, who was accused of sexual assault by Christine Ford prior to his Supreme Court confirmation. The Republican-controlled Senate voted 53-46 for Rao’s confirmation, which is no surprise because Rao herself is far-right on the political spectrum.

Since Rao is only 45 years old, she’ll likely be on the court for a long time, and likely a future nomination to the U.S. Supreme Court, which is why understanding her controversial decisions and opinions now is more important than ever.

Prior to Rao’s confirmation, her writings from her time as a student at Yale University were unearthed, exposing her opinions on sexual assaulters and rape culture in the U.S. In her 20s, Rao wrote:

Unless someone made her drinks undetectably strong or forced them down her throat, a woman, like a man, decides when and how much to drink. And if she drinks to the point where she can no longer choose, well, getting to that point was part of her choice.

This blatant victim blaming prompted criticism from Senator Joni Ernst (R-Iowa) and the head of the White House Office of Information and Regulatory Affairs. Though Sen. Ernst previously claimed she was raped and challenged Rao’s stance on sexual assault during the hearing, she was appeased by Rao’s apology letter, in which she addressed her college articles on date rape to the Senate Judiciary Chairman Lindsey Graham (R-S.C.) and Ranking Member Dianne Feinstein (D-California).

A simple letter. That’s all it took for Rao’s fellow political party member Sen. Ernst to forgive her for actively choosing to perpetuate rape culture.

‘I cringe at some of the language I used,’ Rao wrote.

But this does not come across as a clear apology for her views, nor does it affirm that her regressive views on date rape and sexual assault, in general, have changed.

[Read Related: Your TL;DR Guide to the 2020 Democratic Presidential Election]

In fact, Rao continues to engage in work that reaffirms what she said during her college days. During her time as an administrator at the Office of Information and Regulatory Affairs (OIRA), OIRA decided to roll back Title IX protections for sexual assault survivors and has instead elected to change the rule to protect alleged rapists.

Moreover, OIRA has been delaying the dispatching of sexual harassment guides to employers since November 2017.

With her tone-deaf pieces on date rape and the outrageous administrative missteps she has taken with Title IX, Rao has proven herself to be an enemy of survivors.

However, it doesn’t stop there. During her time with OIRA, Rao worked to implement a policy proposed by the Department of Health and Human Services that “would allow health care providers to refuse to provide medical care to patients toward whom providers might have “conscientious objections” – in other words, LGBTQ patients and women seeking reproductive care.”

Beyond that, Rao is no ally to other people of color. She recently worked with OIRA and the Department of Housing and Urban Development to roll back race-based anti-discrimination policies, a move that follows her disdain for affirmative action according to a University of Chicago newspaper.

As a South Asian-American woman, I am shocked by Rao’s policy track record. How could a child of Parsi immigrants who moved from India to America for better opportunities actively work to snatch those opportunities from various minority groups today?

From the opportunity for survivors to speak out against their assailants, to minorities receiving affordable and safe housing, and women making their own reproductive decisions, Rao’s background is inconsistent with her actions.

Rao has been confirmed to a very powerful circuit court, and her words hold more weight than her writings did decades ago. It is as if Rao has lost a sense of reality and is no longer in touch with our world as she progresses on the career ladder. She is a reflection of our current administration and how it is affording fringe far-right government actors the chance to change the fabric of our society, sadly and unfortunately, for the worse.