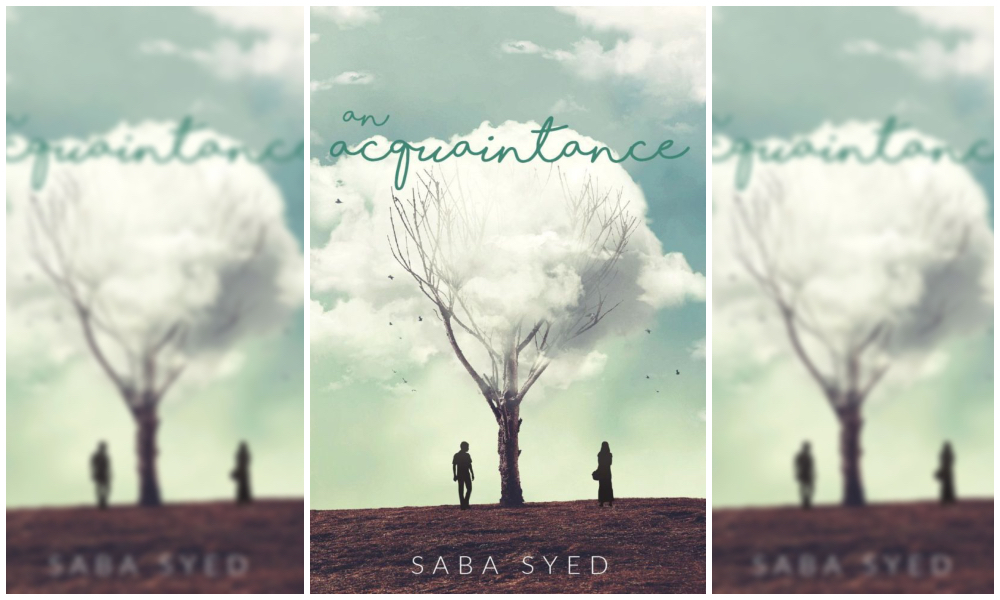 “An Acquaintance” by Saba Syed can leave the reader either disappointed or delighted.

Syed opens with a jarring scene depicting Islamophobia that anyone following the rise of current events will recognize for its frequency. It’s a sad reflection of where we are now as a country when a traumatic event like this one can make a reader feel heartbroken at how it’s so familiar and so painful all at the same time.

The opening is then promptly set aside and the reader can safely assume that we’ll be brought back to it later. This is when the narrative briefly drags. That may have been intentional, as the author spends a significant part of the beginning of the book setting the story up. A reader needs this, of course, but it seems to have been done formulaically. It felt almost as if the author were simply going through a checklist to make sure that all important characters, premises, and settings were displayed and thoroughly fleshed out so that we could finally give the story permission to move on to the plot itself.

But once we move on, oh my! Syed really gave herself permission to draw the reader in. This is the story of Sarah Ali (a high school senior and a Muslim) and her struggle to determine exactly she feels about her classmate Jason, who’s new to her town and her school – and is not a Muslim. Is he an acquaintance? Does she want him to be more than an acquaintance? And while she struggles to label what he is to her, how does she navigate their relationship at this moment? There probably isn’t a medium, genre or time in history that hasn’t visited some version of the classic cross-culture, interfaith, “forbidden love” story so I expected the narrative to move along rather predictably and end with a “Happily Ever After, The End.”

However, Syed manages to fill this story not only with everything I predicted but also with plenty of distinctive touches to make it a memorable read. Sure, there’s a typical high school setting: the cool kids, the jocks, the cafeteria seating politics. But there are an Islamic conference and a retreat, a protective older brother whose religiosity borders on the extreme and an Islamic “scholar” who promptly shuts down anyone questioning the reasoning behind Islamic moral codes. We meet broken families, a judgmental best friend and a mosque community so gossipy, hypocritical and drama-filled that they could (and would probably love to!) have their own daytime soap opera.

As the story progresses, Sarah manages every once in a while to catch herself making (and often verbalizing) assumptions about Jason that she shouldn’t have because they’re based on his skin color. This comes off feeling almost apologetic, like an attempt to hint at “reverse racism.” While stereotypes serve no one, these moments happen slightly too frequently and Sarah dwells on her slipups too much. Also, though she is quite capable of addressing instances of Islamophobia with maturity and wisdom, she is at the same time severely lacking in how she broaches the general subject of Islam with Jason. I found Sarah disappointing in these ways. Yes, as a mom of three high school teens, I’m confident that my husband and I have raised our children with enough awareness of social justice issues to know that “reverse racism” doesn’t exist and enough awareness of themselves as Muslims to be able to relate Islam to others with clarity. But this isn’t why I find it disappointing. It’s because we also get to know her father very well and I was surprised that she doesn’t rise to the challenges of these scenarios given how Professor Omar Ali raised her.

Sarah’s father is incredibly well-written and developed. He’s undoubtedly the hero of this story – and everything a modern Muslim parent should aspire to be. In Professor Ali, we see a widower still mourning the love of his life, while supporting every dream his children have as a single father. We see a father who is pained by what his daughter is going through while resisting the protective urge to swoop in and rescue her. We see a mosque community leader who handles the challenges the community lobs at him with grace and dignity.

It’s Professor Ali’s role that makes how this book ends almost inconsequential to me. Almost. I felt that it wrapped up too quickly. Though it took fewer pages and less storytelling to close the story than to open it, it felt just as routine – as if the author here again had made a checklist, except this time it was a list of loose ends (characters, storylines) to make sure to tie up and call it “The End.”

Ultimately, what “An Acquaintance” left me with was an ending that I simply didn’t like. There are obviously only two outcomes: Sarah and her Acquaintance either end up together, or they don’t. Which of these is your “Happily Ever After” is what determines whether you’ll be left disappointed or left delighted.

Priscilla Martinez is a member of the Board of Directors of Interfaith Power & Light (DC/MD/VA), a national environmental advocacy organization, and has been a lifetime member of the NAACP and Loudoun Interfaith BRIDGES since 2006. During her more than 25 years of community organizing and advocacy, she has served on the board of directors of the Blue Ridge Center for Environmental Stewardship and the board of directors of the Boy Scouts of America National Capital Area Council. She is president of the Purcellville Public Library Advisory Board and serves on the Interfaith, Media, & Government Relations Committee of her mosque (All Dulles Area Muslim Society -- ADAMS Center). She homesteads in the Loudoun County, VA countryside with her husband, six children and flock of egg-laying chickens.