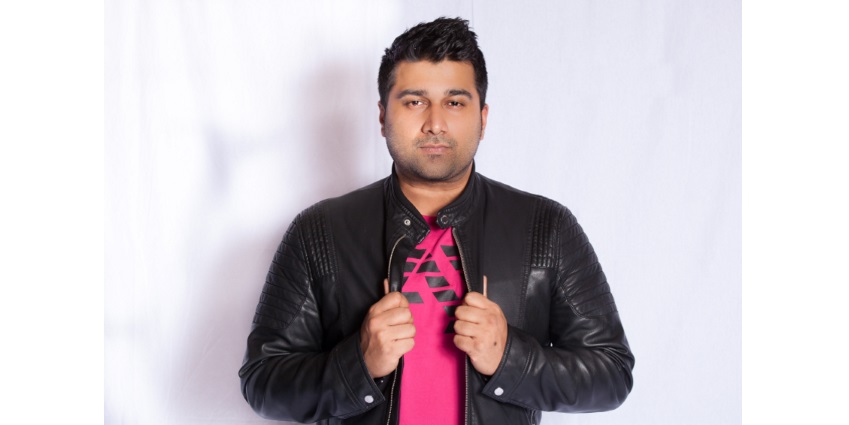 Meet December’s Brown Boy of the Month – Nick Duggal, a Canadian-born stand up comic, writer, and podcaster. He grew up in Winnipeg, Manitoba, in a working class family. Duggal has been involved in comedy for four years and has traveled across North America to share his funny stories and thoughts. He also leads a successful podcast called ‘The Crew Podcast’ with three of his closest friends. Nick is looking to break into the California comedy scene.

“I didn’t grow up in a stereotypical Indian family. Yes, one of my brothers is a doctor. Yes, one of my other brothers is an architect—so that left me. When I told my parents that I didn’t want to do anything like that, they surprisingly respected my choice, which in turn made me respect them even more.

When I was a kid, I remember how my middle brother, Harpal, was always the funny guy. But once he grew out of it, I took over the role and haven’t looked back since. However, as I grew up and the years went by with many jobs from sales to bartending, I wasn’t satisfied. I felt like something was missing.

One night, my friends and I went to a comedy show. The event was awful, but for some reason, I was locked in and hooked. Everyone at the table told me I should do comedy. Two months later, I got booked for a show with sixteen people in the crowd. I didn’t know how comedy worked—I wrote 45 minutes of material, said everything in five minutes, and a close friend of mine even booed me.

I was devastated and tried to figure out what went wrong. The next day, I studied and watched how the famous comedians performed and executed jokes. I watched everything from interviews to live events. I figured out what type of comedian I wanted to be: Dave Chappelle, Chris Rock, Cedric the Entertainer, Jerry Seinfeld and Bernie Mac all in one. I wanted to be different than other Indian comics on stage. I wasn’t about stereotypical Indian jokes, I wanted to a tell a story about the way I saw current events in my life, but make it funny and educational.

Four years into the biz, I have seen a lot and traveled all over North America—some rat holes and more great clubs, but it takes someone with tough skin and a drive like no other. Now, I am hoping to gain ground in California, eventually to secure a regular spot at Los Angeles’ world famous comedy club, The Comedy Store.

Comedy is always on my mind. When I’m driving, people may think I’m talking to myself but I’m really trying to create a joke from a million pieces to a completed picture. It’s art and surgery at the same time: picking words, rearranging them, saying them in the right tone, acting them out, showing expression. I can go on but you get the idea– I’m obsessed with it!

Additionally, two years I ago, I created a podcast called “The Crew Podcast.” It was inspired by all the times my friends and would hang out, roast each other, and talk about current events. Afterall, we would always say, “We should be on the radio.” So when we started the podcast, we rented some equipment, swore up a storm, and dragged topics on for too long. Now, we have our own studio and many sponsors for the show. We have also reached more than 6,000 subscribers from all over the world and have interviewed celebrities like Jerry Ferrara from the hit shows, “Entourage” and “Power.”

Overall, “The Crew Podcast” is a fun opportunity for my friends and I to enjoy what we do best: roast each other and educate our fans as we shed humor on current events.

I want others who are pursuing a creative path to believe in their passions and drive. Use the negativity you may get from people as fuel because one day, those people could be your fans.”