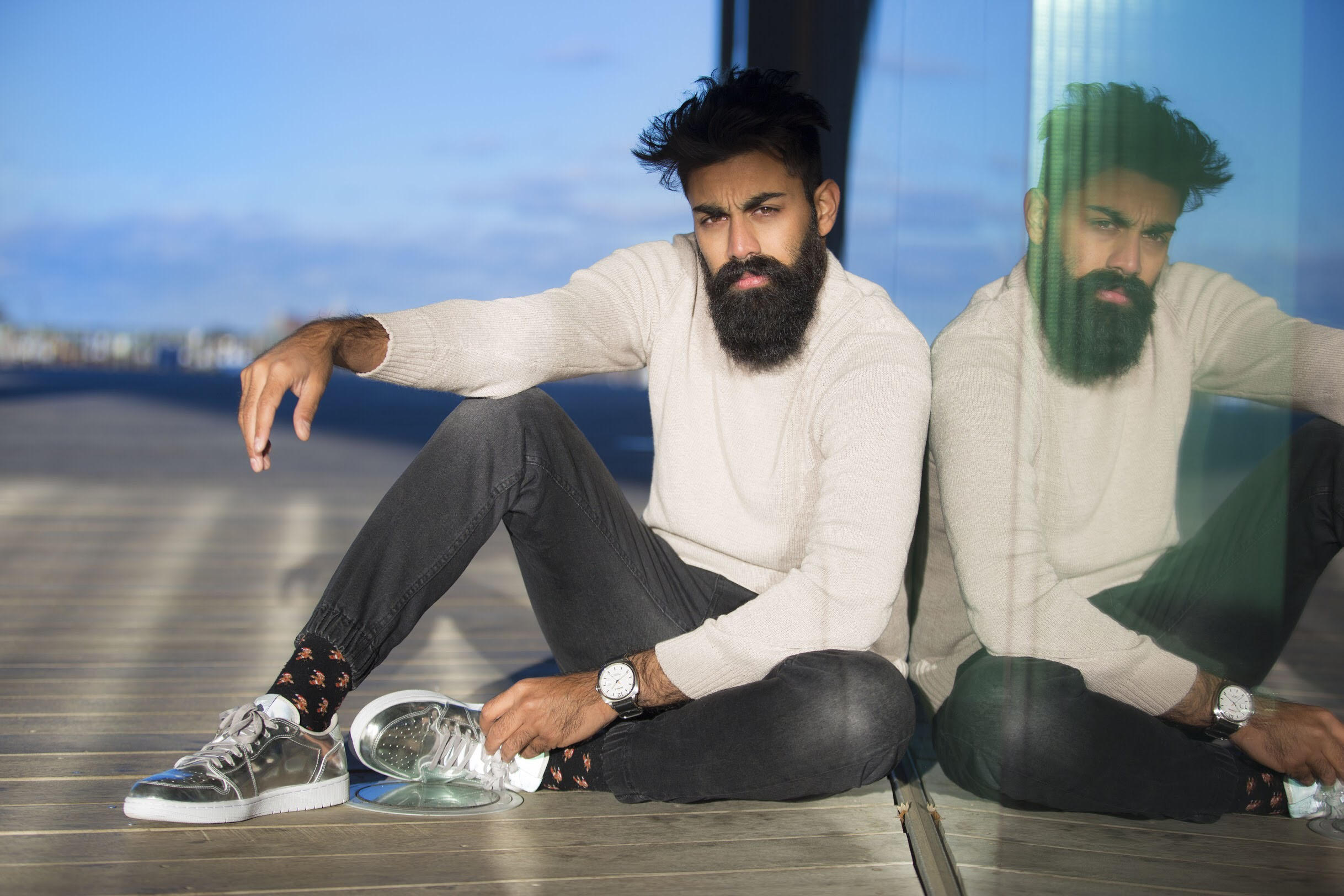 Saagar Shaikh is a producer, actor, host, improv comedian and media manager for Smuggler in Los Angeles. He is known for his podcast “The Bollywood Boys,” his eclectic beard decorations featured on Buzzfeed and MTV, and for previously being the only brown Mythical Crew Member for the YouTube channel Good Mythical Morning. More recently, Saagar stars in the newly released digital series ‘Unfair and Ugly‘ that’s been made waves on The Huffington Post, Al Jazeera Plus, and NBC News. Watch it HERE.

“This might come off as a shock to some of you, but there was a time in my life before ‘The Beard.’ A lot of people associate me with it now — but as an actor going into auditions before I had the beard, it felt like ‘White Hollywood’ made me ‘just another brown person’ and as you might have heard…we all look alike. I wasn’t getting much work.

I remember when I started taking acting classes, my coach used to call me her ‘little terrorist.’ That used to burn so badly, but I always felt that in order to make a living as an actor, I had to accept the fact that I would be typecast. It didn’t help that the only brown-centric theatrical roles were usually to play a terriorist…except for The Night Of, WHICH I AUDITIONED FOR.

Check out a far less intense version of this mug on #UnfairAndUgly link in bio ? @yeahokayali

The desire to act didn’t really set in for me until my junior year in college. I was never really interested in going to school, but my very Pakistani parents insisted that I go to business school. In other words, I didn’t have a choice. While in business school, I was trying to figure out what I REALLY wanted to do with my life. I didn’t have much direction or guidance but I was creative, a risk taker, and I always had a sense of hard work instilled in me. I quietly began doing some research about acting on the Internet, not really talking to anyone about where my head was.

This was also around the time I needed to get an internship because I thought this is just what college kids do – they study and get internships. I happened to stumble upon this random listing, applied, and secured an interview. When I went in, I noticed there were all these headshots everywhere. I found out it was a talent agency for local actors. It was pretty serendipitous, as I had no idea going in. I got hired for that internship and mentioned that I was interested in becoming an actor. They got me enrolled in some evening acting classes and started sending me out on auditions. It was my first foray into auditioning and booking local commercial spots.

I eventually moved to Los Angeles against my parent’s will and started pursuing acting more seriously. Pre-beard, I submitted to about a hundred agencies and finally after a year and a half, one of them signed me. However, that agency was not able to get me many auditions. After being dropped by that agency, I decided to grow my beard out, AKA I was too broke to buy a new razor. I eventually got new headshots with my new wingman (beard), and that was a game changer for me. I signed with new representation within weeks, and now I get auditions very regularly.

I started getting creative with my beard by decorating it for holidays and posting silly pictures on Instagram. Little did I know, those silly pictures would be featured on Buzzfeed and MTV, and that would land me my first National Commercial as a hipster grocery shopper for Shock Top in 2015. It got me tons of exposure and really helped boost my career.

Nowadays, I’m focusing a lot of my efforts on my podcast, ‘The Bollywood Boys,’ where my co-host and I watch, review and dissect the Bollywood films we grew up watching, but we approach it in an informal and comedic way. We talk about how it made us feel when we were kids, the influence it’s had on our upbringing, how it relates to today, whether the content would fly in today’s PC culture, etc.

We also talk about silly Bollywood tropes, the relationships between characters, and plot holes. I love the nostalgia factor. Most brown people grew up on the films we talk about on the show, and for many of us, it’s our one connection to our parents and heritage. The response has been great, and people tune in from all over the world. We’re averaging at least a thousand listens a week regularly. I personally think our Instagram renditions of Bollywood movie posters are magical.

Is Dostana homophobic and outdated or a progressive landmark in Bollywood? Is Abhishek Bachchan a star of his own merit or is it all because of his dad? What is going on with John Abraham’s chest bone(s)? Were Shaan and Saagar wearing any clothes while recording this? The answer may disturb you. This episode brought to you by Guylashes™?. LINK IN BIO. ART by @naureen_meyer

The second thing I’m focusing on is ‘The Get Brown,’ an all-brown sketch team I’m proud to be a part of. We started as a ‘spank show’ (it’s short for ‘brand spanking new’) at the UCB Theatre in L.A. It’s basically a way to determine if your show is going to get a longer run, which is rare for most acts. We sold out the first show, and the slots to follow. We just found out that we are getting a three-month run.

It’s the first all-brown show at the UCB Theatre, which has been around for almost two decades. I feel like we’re making history and it’s super exciting. Everybody on the team is doing some amazing work and I’m really lucky to be working with them. If you’re in the L.A. area and want to watch our show, follow me on social media for updates.

Here is some semi-unrelated and unsolicited advice. We all know that South Asian upbringing is very gendered. I was raised to believe that as a man, I am responsible for taking care of my family and my life decisions need to always consider this glaring and frankly, terrifying responsibility. When I chose this career for myself, I was sure it would cost me a family like the one I always imagined. Many people can’t see themselves as a ‘starving artist’ (Gosh, I do not like that term. It just perpetuates the stereotype that an artist is always, just barely making it. Not true. Sometimes true. But not true, jeez. Can we get some more positive, uplifting phrases in here?)

It was a big decision. Almost a decade later, I’ve FOUND A WONDERFUL FIANCEE WHO IS INTELLIGENT, OPEN MINDED, AND TRULY THE MOST INCREDIBLE SUPPORT SYSTEM YOU CAN IMAGINE. HEART EYES. So, for those of you that are also in this industry and are worried you won’t find a partner that’s willing to put up with your fluctuation of emotions and finances and all of the above, don’t fret. They exist.

One thing I would say to fellow brown people in entertainment is: We need to be bigger fans of each other. We need to be seeing each other’s shows. We need to be happy for our friends who are booking the roles we auditioned for because either way, it’s a win for the culture.

Being a part of this industry, I’ve learned that if you aren’t white, you have to make your own opportunities. Stop waiting for things to happen to you because they might not ever. We have to be smart, work together, and elevate each other. I just want to see brown people unite, rise together, and make some dope shit.”