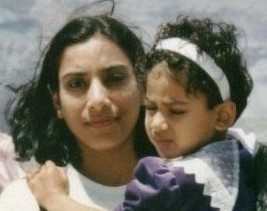 I remember being really young and getting letters, birthday cards and rakhis in those blue Inland letter cards – signifying mail from India. They would more often than not be addressed to Dr. and Mrs., even though my mom holds equal degrees to my dad. I remember thinking how that made my dad more important, better perceived and held in higher esteem.

Back then, I thought it was cool that my dad’s name was written first on the envelope. I wanted to be first too. I modeled my life after my dad. We have a fantastic relationship. He was and still is in many ways my ideal – successful, funny, intelligent, well-liked, always the life of any party.

I love my mother, but I didn’t necessarily want to be her and it’s only now as I get older and see her as a woman, a wife, a mother, a career-woman, as the backbone of our family, and most importantly – as an amalgamation of all these identities – that I see how much I discounted her. It seems among my friends and family that, “we” as younger women sometimes misunderstand those who came before us.

We misunderstand what strength means and doesn’t mean. We create binaries in our heads that strip other women of their personhood (even when we don’t mean to) because to us they are “mom.” We wallow in circumstance and generational divides, instead of seeing the bigger picture and how these women often created space for themselves the best they could. We understand these things theoretically, academically and even experientially or through narratives – but we don’t always feel them. We don’t really step in their shoes to see.

While neither my mom, dad, or I agreed on every single issues or decision, I always gave more agency to my father in my mind, while I took my mother’s attitudes and behaviors to be of a different time, place, and set of norms and experiences. My mother has had success in every attempt she’s undertaken – she’s topped every rank, every exam, gaining a professorship right after graduate school as the youngest person on staff. Family friends urge her to write a cookbook for her creations. She just somehow always know things, even before you do. She’s also quiet and carries herself with poise that is unmatched.

In college, a friend’s mother made a comment about me to him – “She must [be] quiet because that’s a part of their culture.” Despite that statement having many problems with it, including characterizing someone’s introverted and shy personality on preconceived notions of an entire sub-continent, could I really be mad? I have many times thought that same thing of my mother – not necessarily the cultural part but that she was raised in a society and an upper-middle class family where being demure, elegant, graceful and identifying as a proper Indian woman were paramount.

But what took me longer to realize is that those adjectives do not equal weakness. The women in our family, including my mother all pursued their own aspirations, independently and with conviction in times when “good, Brahmin Maharashtrian women” were and still are constrained in many ways. Not one of them were weak.

Demure? Yes. Shy? Absolutely. The way they wore saris (and still do), with only the presence a woman who fears nothing can is enough to make anyone realize that softness does not signify weakness.

It wasn’t until I was in college, when my mother in hints and whispers or in conversations where she knew I was around, would share stories and experiences about her life that made me see her as a woman, the same as I am today. That is when I realized how differently my perceptions of events and thought-processes had been from hers and what may have been the reality of situations. I will never see my mom as an equal, she is too good, too strong, too wise, and too much to ever compare yourself to when you’re a 20-something still figuring it out. 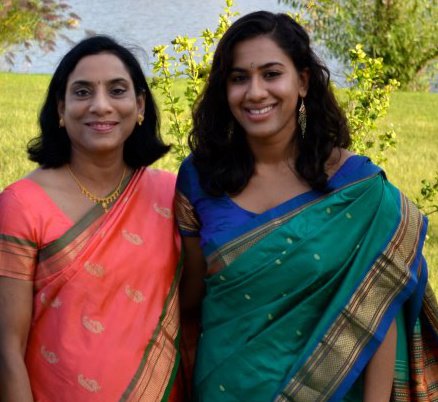 But, because of this realization, I try to see other women as they were before they were titled, and identified, and blocked up into a nice box that is easy for a small child to understand as mum, or aunty, or grandma, or family friend, or so-and-so’s mom, wife, partner, girlfriend, etc.

Even though I was raised by two people and an extended family who never limited me, constricted me, or bought into gender policing, or defined what role a female should play – I discounted my mother, often and for reasons that had more to do with perceptions of woman from her generation in India than my own.

Looking back at those Inland letters, I remember thinking, I would never “just be” Mrs. anything. No one would diminish who I am or diminish my accomplishments. And in doing so, I didn’t consider that my mom raised me (along with dad) to have those values and those ideals that I brandish so proudly. And of course to instill such beliefs in a person – you yourself must have experiences and stories and your own belief system that leads you to impart such things to your child. But I didn’t make that connection.

And I wonder how socialized we all are (or not) to discredit the women in our life, who are older, from a different place, time, generation and place them in the same constraints they fought so hard when they were 20-somethings to cast away from – the same way we do now, vehemently with conviction and idealism. And while my father will always be Dr./funny/intelligent/out-going/great father/husband, my mother and the women who came before her are quiet storms who have paved the way for their daughters- even when I didn’t know it.

This story was originally posted to Rad Brown Moms.