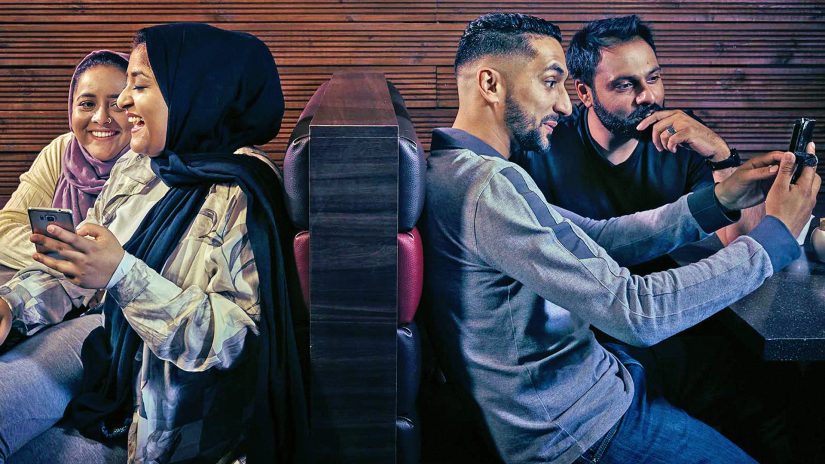 The promising promos of UK Channel 4’s new reality series, “Extremely British Muslims” were a good start—I could almost picture myself liking this show. However, like many other previous attempts at showcasing lives led by 1.6 billion followers of the same faith around the world, this program absolutely fails to see where religion concludes and culture sneaks in.

In a sensitive period where Islam is at the epicenter of every controversy, travel bans and supposedly generating only villains and victims (nothing in between, because normality is overrated), the idea behind this three-part miniseries endeavored to revamp the image of Muslims living in the West, particularly in Britain. Conversely, the line between religion and typical traditions blindly followed by South Asian communities is so poorly blurred, it does anything other than portraying Muslims in a positive light.

The episode starts off with single Muslims residing only within Birmingham (hello, stereotyping) heavily catering to those with purely Pakistani/Indian roots. Sure, the city has a large chunk of British South Asians and proudly holds down the fort to one of many UK Shariah courts in the country within Birmingham’s Central Mosque, however, this only gave birth to one idea: the entire episode focused on pressing issues within the culture and not on being Muslim.

We’re introduced to the brilliant 24-year-old fashion designer Bella Nabi and 28-year-old aviation engineer Nayera struggling to find suitable partners they could possibly marry. For both these confident, strong women, finding a Muslim partner was the easy, obstacle-free stage. The tricky part was meeting someone who wouldn’t conform to the idea of women sprouting out babies and cooking gourmet meals every day, while their God-sent husbands acted as authoritative, sole bread-winners of the family. As a Pakistani-Muslim residing in Britain, I can safely say these are fundamentally cultural issues with zero to none religious notions attached to them.

The perfect example to support this statement is that of Hazrat Khadijah (R.A), Prophet Muhammad’s (SAW) dearly loved wife. Not only was there a 15 year age gap between the Prophet and his beloved, she also expressed her desire to marry him in the form of a proposal sent his way. If Khadija’s story hasn’t broken stereotypes about Islam yet, it might be intriguing to know that she was the most successful business woman during her time, acting as the CEO of her own firm, taking over and expanding the family business after her father passed away.

So, Nayera decided to try her hand at online match-making and sat through what would easily be the most agonizingly awkward date for anybody (I was surprised she didn’t leave mid-way), with a gentleman refusing to succumb to the role of a ‘Man Dad’ in his future married life. I don’t think it states anywhere in the Quran that a woman’s sole purpose is to feed her husband different variations of biryani every day, and that should be taken into account as the holy grail of her love and affection for him. Providentially for Nayera, she defied him uncompromisingly with bewildered facial expressions and witty responses till he realized she wasn’t the subservient little puppet he’d hoped for and asked for the bill.

An extremely awkward moment from Extremely British Muslims.Catch up on All 4 here:http://www.channel4.com/programmes/extremely-british-muslims/on-demand/61587-001

In the same episode, 28-year-old Ash is also looking for a spouse, and to say that he was incredibly confused in terms of what characteristics he wanted in a partner would be an understatement. He initially wanted his future wife to serve his guest tea and cake and then conveniently disappear into the backdrop like a badly edited photograph, only to switch to online match-making and going on a date just two seconds later. Once more, the thought of obedient wives only existing to courtesy to their husbands is wrongly embedded into South Asian (and other) culture(s), not religion.

Using another historic example to back up this argument is that of Nusayba b. Ka‘b al-An’, also known as Umm ‘Ammara. Her heroic efforts during the Battle of Uhud mark her as one of the most prominent women in Islamic history, where she fought alongside Prophet Muhammad (SAW) and shielded him from enemies during the battle, sustaining several wounds and injuries. That’s right! Women fought alongside men in battles and wars, owned businesses and companies and acted as full-time working parents. They didn’t exist to set up afternoon tea-trolleys for their husbands and in-laws!

For a show like “Extremely British Muslims,” it disappointingly did fall into the trap of doing an in-depth analysis of South Asian culture than the actual religion itself. The first episode would’ve been far more interesting if it catered to Muslims originating from other countries, born or residing within the UK. Where were the Middle-Eastern, African, American and South-East Asian Muslims? As the fastest growing religion in the world, thoughts from converts to Islam would have further added profound depth and character to the show.

Traveling across the country (whatever happened to London?!) to speak to more followers of the Islamic faith was one way to add diversity, but it’s also wise to remember that there are many high-profile British-Muslims contributing to society, the economy and the country as a whole. Sadiq Khan, London’s first Muslim mayor is a great example of an all-encompassing British-Muslim who extensively promotes inclusivity and empathy. Famous people of faith having an impact on everyday Muslims would have created an interesting spin to the experience.

In the first of a three part series, where culture was given significant precedence over religion, it can safely be summed up that it’s not a depiction of the Islamic way of life, and, definitely does not represent 23 percent of the population on this planet consisting of Muslims.