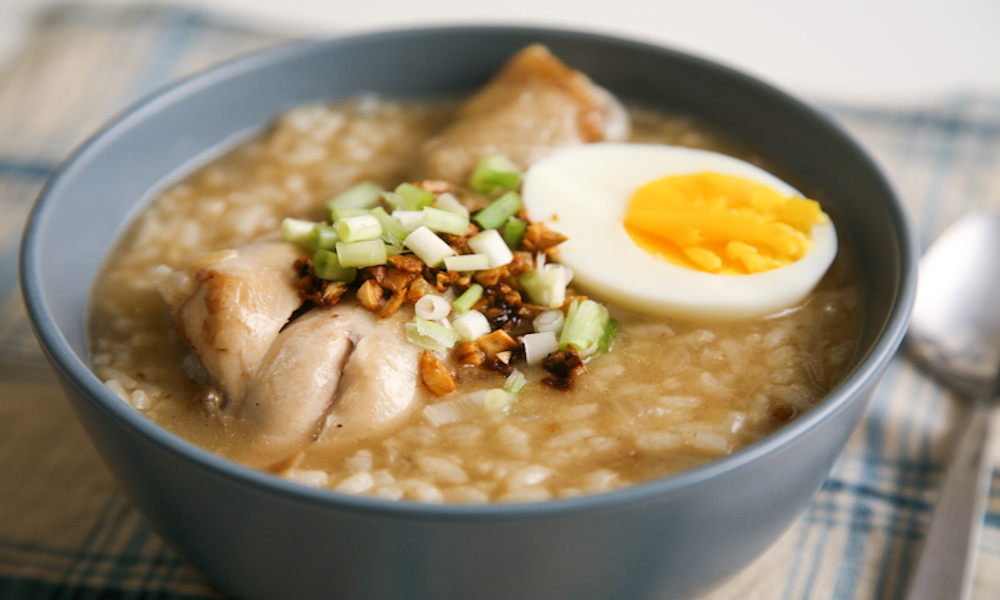 “Can you teach me to make arroz caldo?” I ask my 84-year-old Grandma.

“What? You don’t know how to make that?”

“Aye! I cooked for my family since I was five years old. How old are you now?”

“Aye Nako! If this was the Philippines your husband would have abandoned you.”

I start opening the fifty-pound rice bag slumped against the wall.

“Do you have a measuring cup?” I ask.

Grandma scoops a few fistfuls into the rice cooker with her bare hands. She rinses it under the tap a few times, swirling the grains and dumping out white water.

Grandma makes rice with a ratio of one cup of rice to two cups of water. Her rice is soft and sticky, even stickier than Japanese sushi rice. If apples or plums are in season, she’ll chop some up to throw into the rice but since it’s April, the rice is plain.

“Chop the onion,” she says.

She ignores me so I chop them kind of medium-sized.

On the counter are half-empty pouches of Mama Sita’s tamarind paste nestled inside those green plastic baskets that you get at the grocery store when you buy strawberries. There are paper bags of dried leaves that Grandma had collected from the backyard. I rummage around until I find some ginger root.

I peel a thumb-sized hunk of ginger with a knife and chop it up. I put the pieces into a mortar and pestle and squish it.

I don’t want to tell Grandma, but I looked up a recipe beforehand and there is no garlic in arroz caldo. In fact, the recipe specifically says not to use garlic—the reason being that the flavor would interfere with the ginger.

“Grandma, are you sure there’s garlic?”

She stares at me, unsmiling.

I open the fridge to hunt for garlic. I see shelves of mason jars labeled with masking tape and my grandma’s careful handwriting. Labels like “squid ink,” “pickled feet,” “pork blood” and “bagoong.” No garlic. I rummage around under the counter and find a bulb next to an unlabeled jar with brown stuff in it.

Grandma turns on the stove and starts brewing a pot of loquat leaves. There’s a loquat tree in the backyard and Grandma says that the tea helps her stomach. The tea comes to a simmer, making the kitchen smell warm and earthy.

I smash up some garlic and throw it in a bowl. Then I take out a couple of fresh chicken quarters.

“You need that smaller,” says Grandma.

I try sawing at the bones and pulling them apart at the joints while Grandma looks over my shoulder, shaking her head and frowning. Eventually, she waves me away. She takes out her machete and with one swift thwack, hacks through the bone. After a few minutes—thwack, thwack, thwack—the chicken is transformed into tasty-looking, manageable bits.

She heats up a pot and throws the chopped onions in with some vegetable oil. I switch the overhead fan on. Grandma was never much for caring if the whole house smelled like onions. If she had a smoke detector, it’d probably always be alarming. Which reminds me.

“Grandma, what happened to that fire extinguisher I bought you?”

The onions turn translucent and she throws in the garlic, ginger, and chicken.

“You have to make it brown,” she says.

Grandma then rummages under the counter and takes out a mason jar, the unlabeled one containing the brown substance.

“I brought a bag of neck bones at Manila Market for only two dollars and made adobo.”

I look at the jar with curiosity. So that’s what that stuff is. I see a mound of little bones stained brown, covered with flecks of garlic and onion. Now that’s a dish that really blurs the line between food and non-food.

After forty minutes or so, the arroz caldo is finished. Grandma adds a few shakes of soy sauce and serves us each a bowl. She also takes a side of rice and adobo and pours herself a cup of stewed loquat leaves. We sit down to eat and Grandma starts gnawing on the adobo bones.

“You might break your teeth on that,” I say.

Grandma smiles, displaying a mouthful of perfect, white teeth. Grandma’s teeth look so nice that when she had to get surgery for breaking her arm last year, the nurses assumed they were dentures and tried to take them out of her mouth.

I pick up the jar of adobo and study what appears to be segments of spinal column. I put the jar down and turn my attention to my bowl of arroz caldo, seeing bits of browned chicken seasoned with spicy ginger, garlic, and onions in a savory rice broth. Plumes of fragrant steam are sent into the air.

“Also, Grandma, we really should put the fire extinguisher back in the kitchen.”

I take a bite. Mmm. The garlic didn’t hurt it at all. If anything, it’s even more delicious, adding another layer of flavor to the spicy taste.

“You, your mom, everybody is always telling me what to do,” says Grandma. “But look at me, I’m still alive! Maybe you should learn.”

Maybe she’s right. I take a deep breath and take one of the adobo bones. I take a tentative nibble. The bones are packed with vinegar, soy sauce, and garlic flavor. The acidy of the vinegar had pickled the bone, making them crunchy. Hmmm. They really are quite tasty.

Allison Bekric is a nurse by day and writer by night living with her husband and two daughters in San Jose, California. Allison was raised by a Filipino immigrant mother and American father who taught her the power of words at a young age. She loves interviewing and telling the stories of inspiring and powerful women, exploring issues of culture, race and religion and sharing anecdotes about her Filipino/American upbringing. When she’s not writing, chasing around her kids or giving patients injections, Allison can be found playing renditions of the Beatles on guitar, meditating in the woods or pounding spices for homemade chai. She has a B.A in English Literature and a B.S.N in nursing. Follow her at allisonbekric.com.

Shiza Shahid: At Our Place, Everyone Has a Seat Saved at the Table