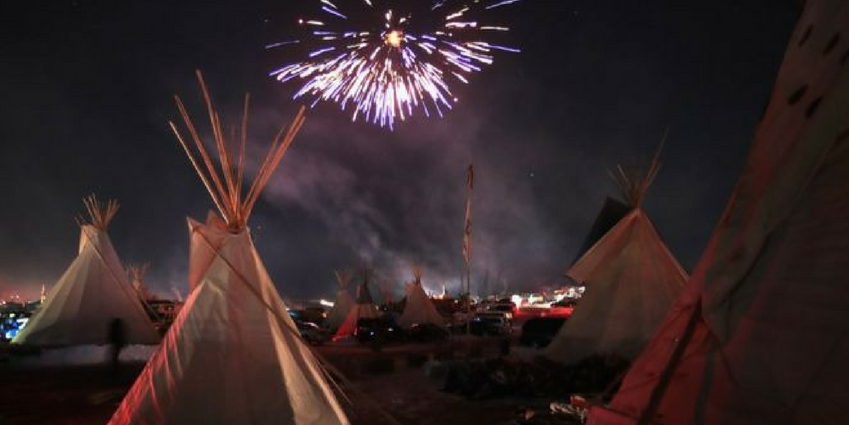 A few months ago, the protests to prevent the proposed construction of the Dakota Access Pipeline began. The project that would transport crude oil from North Dakota to Illinois has received much opposition and criticism, as it could poison the water supply in the surrounding areas and would intrude on sacred lands of the Standing Rock Sioux Tribe, as well as many other native tribes, who have joined the fight.

Since before the establishment of America, the history of Native Americans has been one of great suffering and marginalization, and this history is often ignored. The natives once inhabited much of the land of this country, and today, they legally retain only a miniscule amount of it. And now, even that sliver of land is being threatened. If the natives were given land legally by the government, they should be allowed to keep the land and control what is or is not built upon it. For a country that is constantly held on a pedestal around the world (probably up until the presidential campaigns and election this year) for respecting the rights of its citizens, it has done a poor job of addressing the concerns and complaints of the Native American community. They are probably one of the least talked about minorities and their plight is often glossed over.

Although these protests had been going on for months, I only read about it a few weeks ago. Before that, I recall seeing only one video about the protests, and that too was on social media. The video was not produced by a mainstream news organization. How could it be? In the 24-hour Trump news cycle that has dominated news stations since even before the election, the Standing Rock protests have had little to no coverage.

At a time when the country needs unity the most, it has been encouraging to see many groups and influential individuals come out in support of the Native American tribes and demonstrate solidarity. For example, around 2,000 veterans lent their support to the cause this weekend and protected the protestors from further clashes with law enforcement.

Celebrities have also spoke out on the issue, and some have even joined the protests, such as actress Shailene Woodley who was arrested for criminal trespassing and engaging in a riot on Oct.10, while partaking in the protests. Mark Ruffalo is another celebrity who has physically participated in the protests on the side of the Standing Rock Sioux. Because there was very little coverage of the protests, I think it was important for celebrities to get involved, as sometimes that is the only way to shift the attention of the mainstream media toward a specific issue and bring awareness to the public.

[Read Related: On America: A Brown Boy’s Thoughts After The U.S. Election]

The authorities in North Dakota set an evacuation deadline for Monday, Dec. 5, which was put in place to minimize danger due to harsh weather conditions. Those who did not evacuate were warned that they would be arrested. However, on Dec. 5, the Army Corp of Engineers heard the concerns of the protestors and announced they would attempt to find another route for the pipeline that would avoid crossing under Lake Oahe.

While protestors are celebrating this new development, it does not mean that the fight of the Standing Rock Sioux and the protestors is over and the issue has been resolved. However, it is commendable that there has been a decision to look for an alternative to the pipeline route, which was previously proposed, but there are still worries that the incoming Trump administration will attempt to override or fight this decision.

It has been a grueling year where fear of the other, harsh rhetoric against minority groups and social tension have been ever present. With the year coming to a close in less than a month, this decision feels like a step in the right direction and can hopefully give us hope that 2017 will bring a deeper understanding and acceptance of one another, as well as unity.