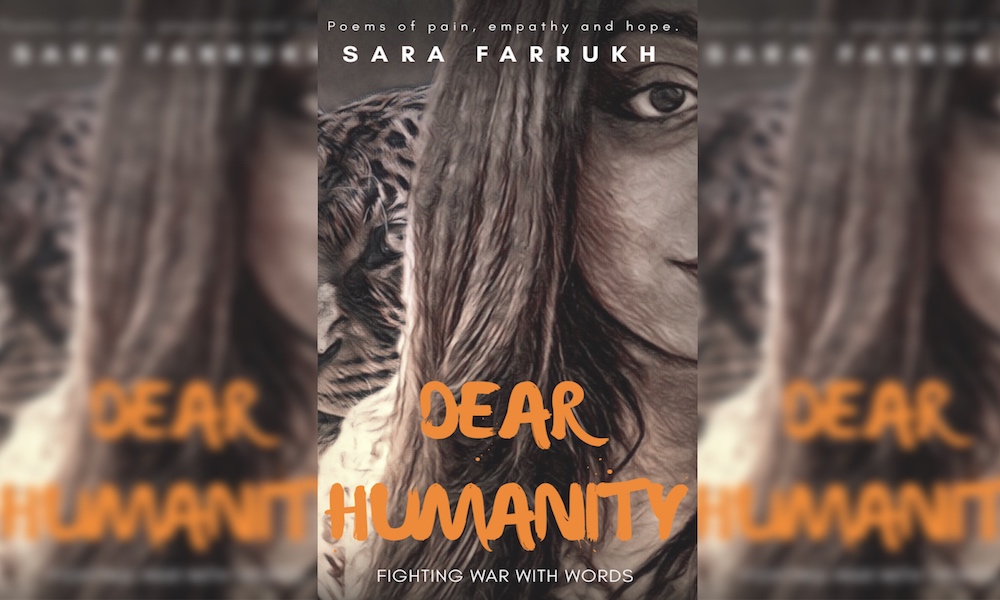 “Times of conflict are times of grief, and in such times, words can be a strong weapon. I’ll fight every battle with my words. Words of pain. Words of empathy. Words of hope.” – Sara Farrukh, “Dear Humanity: Fighting War With Words”

There is an old adage: “The pen is mightier than the sword.” “Dear Humanity: Fighting War With Words” is a collection of 19 main poems by budding poet Sara Farrukh that pays homage to this saying, illustrating resilience and peace for humanity can be brokered and achieved through writing rather than fighting on the battlefield.

Divided into the four sections of “PAIN,” “GUILT,” “HOPE” and “LOVE,” “Dear Humanity” guides the reader through the many experiences, themes and consequences of warfare such as death and destruction, the fight for survival, remorse for taking the lives of others, helplessness, karma, and forgiveness and love, among others.

The first poem in the book, “A Mother’s Womb,” immediately sets a somber tone for the rest of the work as it hauntingly tells the story of the death of an unborn child due to an ongoing conflict. Poems like these in “Dear Humanity” poignantly remind the reader of the realities and tragedies of war when we’re so lost in and consumed by our daily routines.

While the anthology may make one feel guilty and sorrowful about the plight of humanity and the world we live in at times, not all hope is lost. Farrukh’s last set of poems are especially uplifting because they suggest we are the future – despite (literally) having blood on our hands, we have the power to reverse the chaos and destruction we have caused to ourselves.

When asked about the purpose and inspiration behind the poems, Farrukh commented:

“I wrote the collection given recent affairs around the globe. Modern-day wars are ongoing and these conflicts have led to innocent [people] suffering. This book is a tribute to all those brave soldiers who fight with their patience and perseverance in such times. It is really easy to forget about their pain from the comforts of our homes where we are made to feel secure. I want the reader to think about this pain and go through a reflective journey. The sections are divided as such that after describing the pain and acknowledging our loss of faith in humanity, I have tried to highlight that despite difficult times, hope and love are the ultimate answers.”

“Dear Humanity: Fighting War With Words” is available for purchase on Amazon.