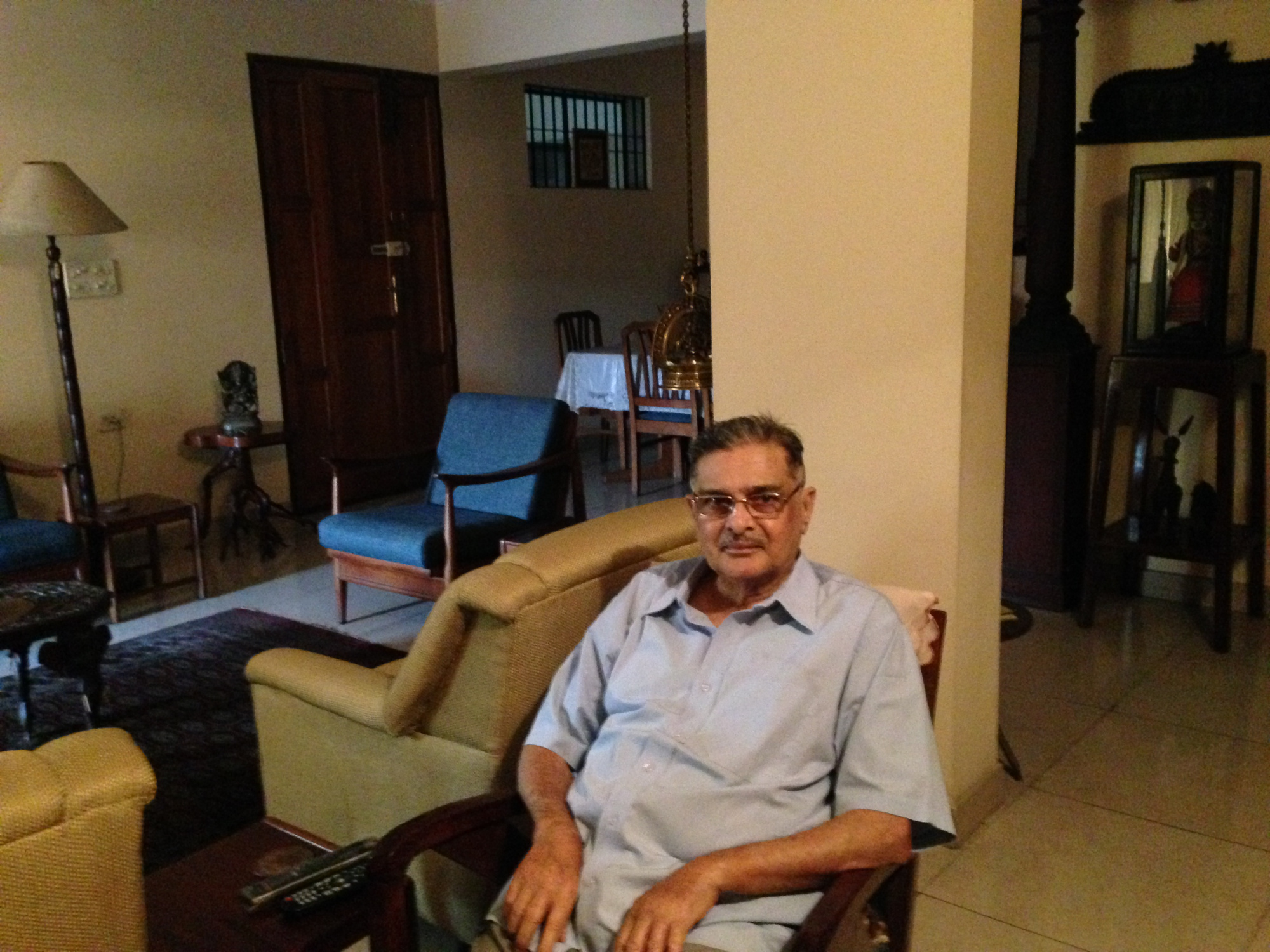 It was a weird thing to see. “Mutassan has passed away,” my dad’s text read at 9:41 a.m. The words just hung there.

Until that morning, I had never really experienced death firsthand. I’ve known a few people that have passed away — classmates, family friends, distant relatives — but for the first time, I was experiencing the crushing finality of death.

On Oct. 20, 2015, my maternal grandfather, Mutassan in Malayalam, stopped breathing. Only a week before, my mom had flown to India from my childhood home in Michigan. The journey across the ocean is exhausting when there is something to look forward to; it is even more so when your fears are unfolding at the destination. Rushed, tired, and cautiously optimistic, my mother went.

A few days after she got there, he woke up and saw my mother by his bedside. He lucidly asked about me and my brother and my dad — even at that bedridden stage, his family was on his mind. And then he slipped away.

It happened so quickly.

I haven’t seen my Mutassan since 2009. Growing up, my mom would make us go to India every other year to see her parents. Because my Achamma — my paternal grandmother and only living grandparent on my dad’s side — has always lived with us in the United States, my dad was never as adamant about these trips; we went for my mom.

I used to dread the India trip. It’s not that I didn’t want to see relatives, and the journey was okay when you had company. I was always bored. When you’re a teenager whose friends are taking lavish cruise vacations and lying on beaches, the last place you want to be is your grandparents’ house with dial-up Internet and Windows ’95. I hated that boredom that would envelop me for three weeks every other summer.

That 2009 summer was the year I graduated from high school, and I was especially ticked that I would be missing so many graduation parties. I got on that plane somewhat resigned, knowing that this might be the last summer that I’d be able to visit for a while. College meant summer classes and internships, and then it’s onto real life’s obligations and restricted vacation days and excuses. This was the last summer where time was really mine, where vacation stretched on endlessly.

Of course, that was then. Those feelings are from “then,” when I was a younger and more selfish version of myself. With this news, I felt nothing but guilt.

After my parents were married and my brother was born in India, our small family moved to America along with my Achamma. First Florida and then Michigan, the roots were planted before I even came along. Ours has always been a family of immigrants with these trips to India, long distance phone calls, and Hindi music on weekend mornings. But it is only as an adult that I have begun realizing the strength of my parents to leave behind everything they knew in search of career fulfillment and a different life for their children. I am only now appreciating my mom’s sacrifice of parting with her parents to move to the other side of the world. Sure, I moved to a new city after college. But they moved eleven time zones away from everything they knew.

After we got the news, there was a feeling of helplessness that shrouded me. Eight thousand miles away, my mom was having the worst day of her life, and all I could do was send her a Whatsapp message in the hope that she’d have access to WiFi at some point. I briefly considered the possibility of attending the funeral until I realized that even if I left that very moment, I would never make it in time. I cursed the miles between us and then the tears began.

Through this whole ordeal, I understand my mom more than I ever did before. She is brave — almost stoic. I am quick to cry; I get choked up talking about anything I feel strongly about, I notoriously cry during every movie, and I can essentially summon tears upon command. But my mother is a rock, rarely showing much emotion at all. When I finally got to speak to her, it was my voice that was cracking and my eyes that were swimming. She spoke solidly, even matter-of-factly. She is stronger than me.

I can’t say that I was close to my grandfather; I would only see him on those summer trips and occasionally I’d speak to him during my mom’s weekly India call. But I know Mutassan was so proud of us. He hated that we were so far away, and would do his best to coax my mom to move back to India every chance he had, but he was proud of what we were accomplishing. When I decided to go to the University of Michigan, he looked it up online (on that never upgraded dial-up Internet) and told me on one of those rare phone conversations that it was a good school. After I graduated, he wanted to know more about the career I was pursuing and the unconventional path I desired to take. Instead of questioning me, he was supportive. This was the thread of unconditional love, of familial love.

I loved the way he would emerge from an afternoon nap in a lungi and drink his tea in front of the TV. He would talk back to the TV no matter what he was watching — whether it was a tennis match, the local news, or the Indian cricket team.

I loved his insistence on driving himself everywhere — even in the awful Indian street traffic — and his stubbornness in letting go of that bit of independence when his eyesight began to fail. He would tease me about driving on those lawless streets after I learned how to drive stick shift and I would shake my head violently at the thought of getting behind the wheel there.

I loved the way he’d command a room, just by sitting in the head chair with a glass of Scotch in hand.

A few months before he passed, my mom asked my brother and me to write him a simple email, updating him on our jobs and our lives. “Mutassan has been asking about you guys,” she told me. “Just write an email, he’ll be so happy.”

My parents would remind me about this email every Sunday when I spoke to them. It was almost nagging, and I’d always say that I’d do it just to get them off of my back. For months, I assured them that this would be the week that I’d write that email. This week. No, sorry, this week. Sorry, I forgot, I’ll definitely do it this week.

I never wrote that email.

I always thought I would see him again because you always think you have more time. And I thought I was too busy, living my “demanding” New York City life. I didn’t sense the urgency in writing down a few words to my grandfather, who cared unconditionally about my wellbeing and happiness. I thought that he’d be waiting for the email for months to come, with infinite life left to live. I didn’t feel the need until it was too late. Now once again I am feeling mountains of guilt.

In a way, I guess this is my letter to him: Dear Mutassan, I’m doing well. Actually, I’m doing more than well, living in this city and chasing my dreams that you always supported. My roommate and I are writing short films and actually filming them, and I feel so grateful to be pursuing creative things. I hope I can come to India again soon and I wish that it’d be you waiting for us in the bright white Kochi airport, ready to stuff our large suitcases into the too-small trunk of an Ambassador cab.