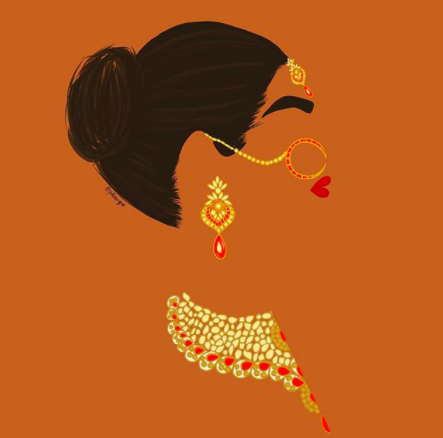 In the distant past, I dreamed about having a love life straight out of Bollywood. I wanted to be with this amazing desi man that gazed at me like I was the most beautiful thing he’d ever seen, just like Shah Rukh Khan looked at Kajol in “Kabhi Kushi Kabhi Gham” the first time he saw her. I hoped that my love life would be simple; that I could satisfy my parents’ wishes of wanting me to be with an Indian man, while making myself happy as well. But over the years, that seems to be easier said than done. And it’s because of one thing: colorism.

You’re probably wondering what the connection is. What does the shade of one’s skin have to do with finding love? The unfortunate truth is that in South Asian culture, it seems that the darker skinned you are, especially as a woman, the less a guy pays attention to you. Perceived value is very much attached to the shade of your skin, and this is something we all know to be an effect of colonialism. For centuries across many cultures, darker skin has always been undesirable, while lighter skin makes one feel that much closer to those who were in power: European colonizers.

Even today, South Asian media promotes the ideology that lighter skinned women have better lives, better careers, and a better chance at love than women with darker complexions. And unfortunately, some desi men buy into, and consequently, help perpetuate this ideology. These men can really mess with a desi girl’s self-esteem as it pertains to the shade of her skin and the value she attaches to herself as a result of it.

I can still recall a few times this happened to me.

At the beginning of college, I was talking to a desi guy who I thought was great. Everything was amazing between us, up until he gave me a backhanded compliment I’ll still never forget.

“You know, you’re really pretty – you don’t look like most South Indians. You’re much lighter than most of them.”

At the moment, I took the compliment and ran with it. But then I kept noticing this pressure to ensure I stayed the wheatish color that I am. On a beautiful sunny day when could’ve been soaking in all that Vitamin D, I found myself constantly wanting to stay under the shade of trees so I didn’t get any darker. When I saw that guy speaking to another girl who was lighter skinned than me and acting more than a little flirty, I felt self-conscious about my skin tone. This man’s actions and words had caused me to devalue myself over something I had no control over, and quite frankly, had no reason to feel bad about.

A few years ago, I had just started developing a friendship with another desi guy who implied some sort of interest in me. On one occasion, we had a conversation about some of the girls we both knew in our circle. He had expressed that he found one of them pretty attractive but found me attractive too. And this how he described his attraction towards both of us:

“Both of you are really gorgeous, but you have a better body than she does, and she’s fairer than you.”

There it was again. Skin tone crawling its way back into the conversation as a standard of beauty. When he made that comment to me, I felt a surge of rage, betrayal, and low self-esteem all at the same time. Rage that it was 2016 at the time, and skin tone was still such a big deal. Betrayal since I thought this guy wasn’t shallow and pretentious, and this comment proved to me that he was. And low self-esteem because yet again, skin tone was being factored into how beautiful I could be, and I knew I’d never be at the top since I’m definitely not fair-skinned by Indian standards.

It was at this point that I realized that if I wasn’t going to allow my skin color to define me or my worth, I had to take some steps to remove myself from environments and situations where skin tone would inevitably be factored into what’s beautiful and what’s not. This sometimes meant not attending gatherings where I knew there’d be insensitive extended family members who’d comment about how much lighter I used to be as a toddler, immersing myself in other friend groups where skin tone wasn’t such a huge focus, and finally, going through a huge vetting process when it came to my romantic interactions with desi men.

I want to re-emphasize, I’m not saying all desi men make shallow comments about skin color like this, and I’m certainly not saying every desi man thinks that only light-skinned women are gorgeous. I’m also not saying that only South Asian countries have these messed up standards beauty that some men buy into. It exists in many countries all over the world.

But within our own community in particular, I think it’s really important that we, as desi women, be confident in our own skin. That we can enjoy our time at the beach and not worry in the back of our minds about how much darker we’re getting. That we can be in a social setting and not feel less worthy than another woman simply because she looks closer to the standard of beauty that the South Asian film industry has established. That we can post pictures on Instagram without figuring out which filter makes us look lighter.

And as much I’d like to believe we can accomplish this all by ourselves, we also need the support of the rest of our community. We need the media to show us through ads, movies, and TV shows, that dark is beautiful too. We need our families to not scold us or future generations for being out in the sun for too long or drinking coffee because we’ll get darker. And we need men who will admire us and find us beautiful just the way we are, whether we’re fair-skinned, wheatish-brown, or deeply dusky.

How Summer Memories From Bangladesh Inspire Me Every Day