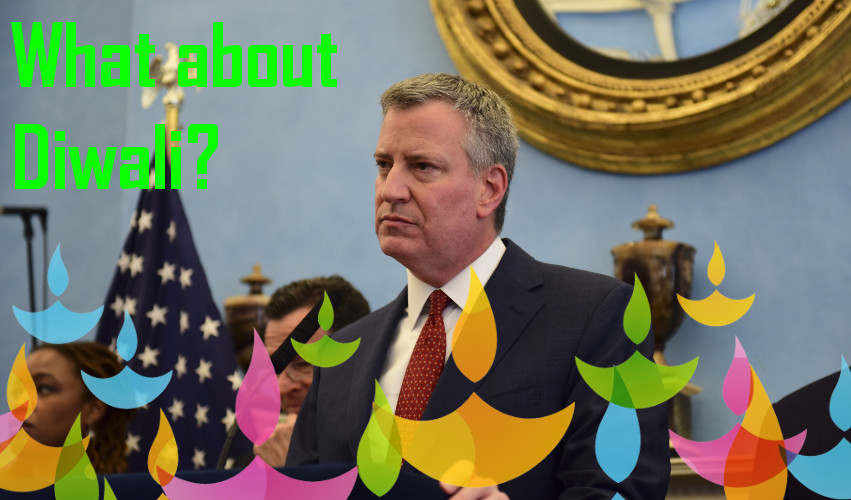 Diwali will not be included as a public school holiday in New York City this year–or in 2016.

At least that is what I and other members of the Diwali Coalition of NYC were told at a meeting in late March by the city’s Commissioner of Community Affairs Marco Carrion and officials from the city’s Department of Education.

The Diwali Coalition of NYC is a broad-based group of organizations and temples that advocate for the inclusion of Diwali as a public school holiday.

Bloomberg said that children needed more time in school, not less, and many parents (or soon-to-be parents like myself) agreed with him.

At a time when American school children are falling behind in math and science compared to their global peers, it seems that our governments’ focus should be on improving the quality of education in our public schools rather than finding ways to incorporate more holidays.

Bloomberg held strong and much to the dismay of the city’s vast Muslim community, he continuously denied their efforts to include Eid amongst the public school holidays beginning in March.

But the Muslim community also held strong, continued their advocacy efforts and found a friend in the city’s new Mayor Bill de Blasio.  The new mayor fulfilled what his administration refers to as a “campaign promise” and officially included two public school holidays for the Muslim community: Eid al-Fitr and Eid al-Adha.

As could only be expected, this announcement has led to a flood of requests from various minority communities for public school holidays, such as Diwali and the Chinese Lunar New Year.

Even those of us who agreed (and still agree) with Bloomberg have jumped into the advocacy efforts with gusto. After all, if the Mayor is willing to accommodate one religious minority community, isn’t it only fair to accommodate others who also constitute a significant minority of NYC?

Last year, when Eid was still under deliberation, our coalition met with Commissioner Carrion and the D.O.E. to discuss the importance of Diwali for Hindus, Jains, Sikhs, and even some Buddhists (collectively adherents of the Dharmic traditions).

The city is home to a vibrant and growing Dharmic community, and though it is somewhat smaller than the Muslim community, it constitutes a significant percentage of the population, particularly in boroughs like Queens.

Moreover, our city council has urged the D.O.E. to establish Diwali as a public school holiday, just as it did for Eid. In 2014, U.S. Congressmen Joe Crowley representing the city wrote to the Mayor in support of the coalition’s efforts.

Unfortunately, these efforts have been to no avail so far.

Diwali is still off the table for the 2015-16 and 2016-17 school calendars. We were told the planning of the public school calendar is complicated with a certain number of mandated school days, a set start date and a minimally flexible end date.

To add more holidays, various union contracts must be renegotiated. Still, there is hope, but no promises or guarantees, for the 2017-18 school years either, when Diwali will be celebrated on Thursday, October 30.

Continued community advocacy is the key, because though we are sympathetic to the complexities involved, a precedent has already been set. All of these bureaucratic hurdles were overcome to accommodate the two Eid holidays into the school year. Clearly, it can be done again.

The Mayor’s responsibility is to equally serve all denizens of this amazingly vibrant and diverse city. And while his efforts to accommodate the Muslim community are commendable, his exclusion of Diwali is both highly disappointing and questionable at best.

The Diwali Coalition will continue its advocacy to ensure Hindu, Jain and Sikh students do not have to choose between celebrating Diwali with their families and attending school.

Sheetal Shah is the senior director of the Hindu American Foundation, where she focuses on marketing, public policy strategy and operations. Shah practices Ashtanga yoga at Ashtanga Yoga New York and serves on the Board of the Broome Street Ganesha Temple.