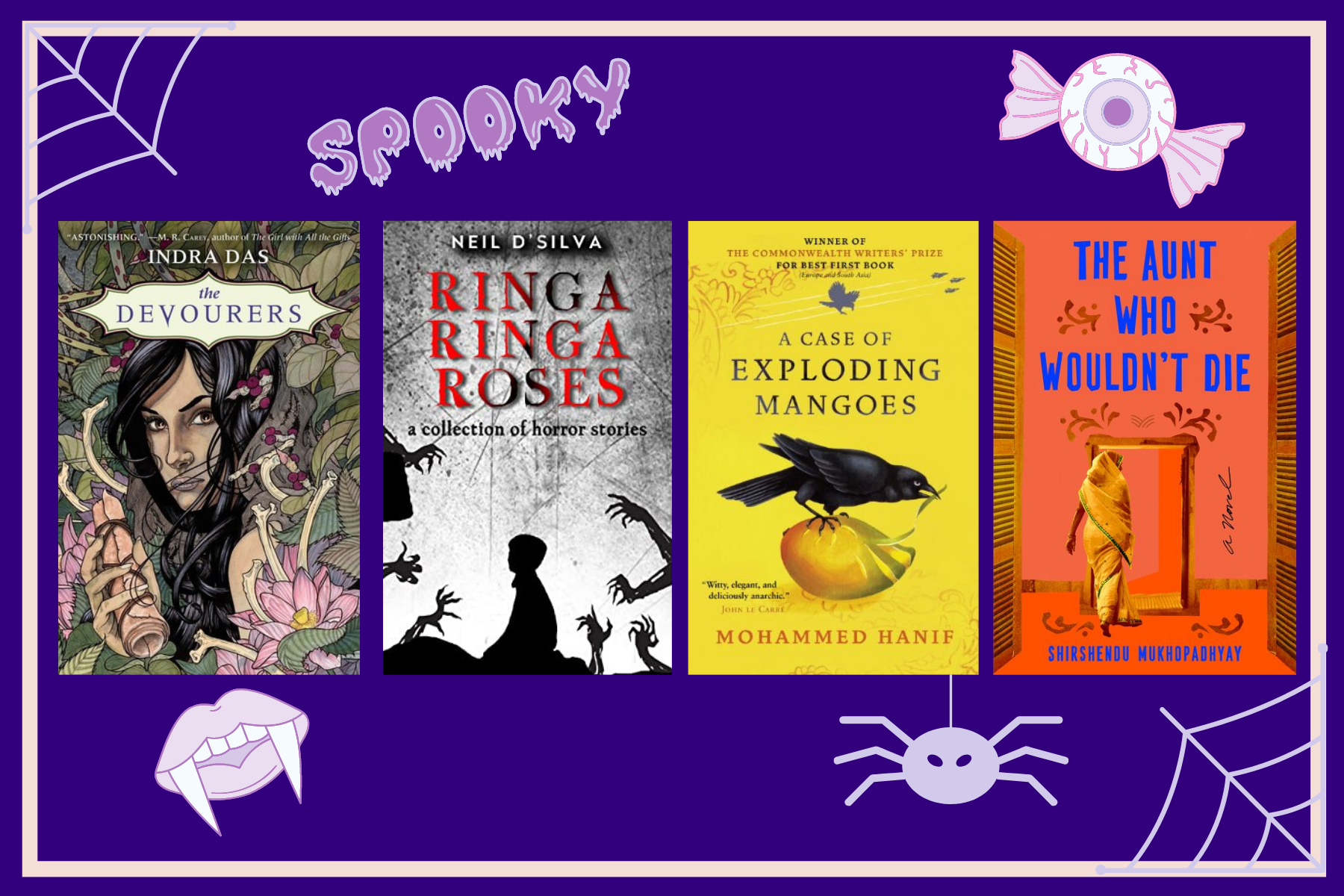 We at Brown Girl Magazine come bearing treats for you all! When the end of October rolls by, the spooky vibes are undeniable. Spooky does not always equate to ghosts and ghouls, though, because it also comes in the form of everyday scaries. Nevertheless, we are here to provide you fictional forms of escapism, so grab a bowl of candy, set your fangs in tight, and take your pick from some of the thrilling and chilling tales below. Surprisingly, it was quite a difficult feat looking for thrilling and chilling tales written by South Asian writers, so thank you to our community of readers for some of these suggestions!

Here are four unique books that deal with a variety of thrilling, hair-raising, spine-tingling, look-under-the-bed stories:

1. “The Devourers” by Indra Das

The story begins in Kolkata, India, when the protagonist, a history professor, is approached by a stranger to transcribe a series of handwritten scrolls. Things soon start to take an unexpected turn when the stranger turns out to be “half-werewolf” — one with the ability to morph into the “mythical” being at will. The scrolls hold an important story between two supposed lovers from the past whose story requires a mandatory content note for sexual assault. The two produce a half-human child that leads to complicated questions and complicated answers. Published in 2015, “The Devourers” is Indra Das’ debut novel and is recognized as an important narrative of queer horror-fiction. Das writes an entertaining story that immediately draws the reader in because of its many layers: a story of love, war, monsters and much, much more written in a unique storytelling style, demanding attention from its reader. “The Devourers” is an ideal book to read in tandem with a friend or as a book club pick because discussions are sure to arise — chilling discussions best unpacked with a buddy (or two).

You can purchase a copy of “The Devourers” from Penguin Random House!

On top of Indian horror writers and books to look out for, Neil D’Silva released “Ringa Ringa Roses” earlier this year. The cover itself makes chills creep down your spine, which is apt for this collection of short stories that centers around three children, ghosts and talking dolls. If you are looking for a book filled with suspense, hair raisers and fantasy, this is the book you want to curl up with on Halloween night.

3. “A Case of Exploding Mangoes” by Mohammed Hanif

Released in 2008, “A Case of Exploding Mangoes” is a comic novel based on the plane crash that killed the former president of Pakistan, General Muhammad Zia ul-Haq and outlines Pakistan’s recent history of cultural opposition and complicated political alliances. A combination of political satire and history makes Mohammed Hanif’s debut novel a riveting read! Added to that, an ensemble of familiar characters spanning from a film noir-esque intelligence agent with an unregistered car and a constant pack of Dunhill smokes to boot and a somewhat-clumsy hero on the other end drives the story. If you are on the lookout for a smart thriller packed with love, dark humour, history, and conspiracy — this one is for you.

You can purchase a copy of “The Case of the Exploding Mangoes” from Penguin Random House!

4. “The Aunt Who Wouldn’t Die” by Shirshendu Mukhopadhyay

Recommended by a book critic for NPR’s Fresh Air, “The Aunt Who Wouldn’t Die” is not your typical Bengali story that centers around family and love. This laugh-out-loud dark tale is about a long-widowed “auntie” Pishima who suddenly dies. Instead of peacefully departing, her ghost comes back to haunt the family whom she blames for her misfortunes. Three generations of Bengali women find themselves tied up in the antics of this grudge-holding auntie. Kick back and alternate between experiencing chilling goosebumps and slap-your-knee, laugh-out-loud moments.

You can purchase a copy of “The Aunt Who Wouldn’t Die” from HarperCollins!

Stay safe, wear your masks, wash your hands, vote if you are in America and are eligible and have a Happy Halloween!