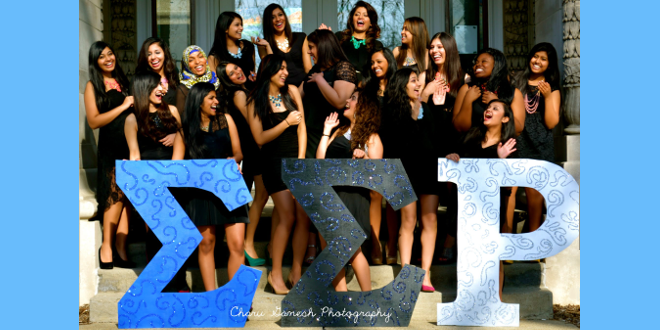 by Anya Rath
When I was growing up, joining a sorority never crossed my mind.

All the TV shows and movies that depicted gorgeous all-American blonde girls were never something that I, with my copper skin tone and thick black hair, identified with. It wasn’t that I looked down on them – I just honestly believed I had no place to fit in amongst them. It wasn’t really an option in my mind.

Fast forward to today, I’ve been an active member of Sigma Sigma Rho Sorority, Inc., a South Asian interest Greek organization, for nearly three years. So you might ask, how did that girl who had zero intention of joining Greek life in college end up proudly repping her letters?

I hesitantly and skeptically followed a friend to the informational after refusing multiple times. At the end of the day, I had nothing better to do than check out this sorority that had presented itself several times to me.

Within moments of sitting down, I was smitten. Skepticism turned into fascination as the women, who started the sorority on Michigan State University’s campus the past semester, explained how the organization worked and what we would gain from crossing into Sig Sig Rho.

Despite the fact that I only had a hazy idea of what was going on, that night I decided that this was something I wanted. I can honestly say I’ve never looked back. I crossed in Fall 2011 as Sister Apex in the Beta Class of Sigma Sigma Rho’s Lambda Chapter.

As a terribly shy freshman on campus, being involved in this organization automatically gave me a family to turn to. Once I earned the title of “sister” and became surrounded by so many sisters alike, I felt comfortable asking and giving help at any given time.

Brown girls get the unfortunate (and sometimes true) label of being “catty” with each other and a lot of people jump to the conclusion that generalizes an organization. But as we always tell those looking in from the outside, “yeah, not everything is perfect all the time, but we fight like sisters and makeup like sisters.”

Having people that act as a support system through your formative years in college is indescribably valuable.

One of the most important things I have learned since joining Sigma Sigma Rho is that this element of sisterhood is not restricted to the boundaries of your own campus. With regional conferences, national conventions and social media, I have met many inspirational, kind and unique women, that I would have never had the opportunity to meet otherwise.

Spending my entire college career as a sorority girl helped me to learn the meaning of working for something. As a member of an organization that was fairly new to campus, I have seen how we have grown in number and reputation over the past three years. I have seen the mistakes we have made and the right decisions that brought us further ahead in our goals. I have come to value professionalism and the true meaning of integrity.

After our sorority joined our university’s Multicultural Greek Council, I found the fierceness of Greek pride. While I always felt proud of my letters, there is no feeling like screaming your sorority chant at another Greek organization’s event. Through Greek events on campus, I have met and bonded with other sorority and fraternity members, solely because we understood what it means to be Greek.

Here are some questions many girls rushing a sorority always ask:

What’s the point of a sorority? Why can’t you just stick to having friends?

I would be lying if I said the girls in my sorority weren’t my  best friends. But that’s not enough for us, because being in a sorority allows us to be organized, to work toward goals and make a difference on campus and beyond through our philanthropy work.

Isn’t being in a sorority just paying for friends, though? I don’t know if I can afford it.

No. With active dues, you’re paying for the foundation for your organization to do bigger and better things. As for affordable, I can only speak for Sigma Sigma Rho and comparatively our dues are really low. I pay less than $200 a semester in chapter and national dues combined.

Will my grades drop?

Being able to manage your time is something that needs to be learned in college and being in a sorority definitely forces that to happen. That said, there is emphasis on academics within sororities. Oftentimes, you won’t be extended a bid if your GPA doesn’t match our required mark. We make a point of helping each other study, and my chapter received the Highest GPA award at the last national convention.

There’s no such thing as a “type” of sorority girl. Each of us have extremely different personalities, majors and interests. One girl might be loud and extroverted while another might be more reserved. Some of us are on other dance teams, while others might work for the school paper. You can still explore other interests and organizations — for many of us, being in a sorority is like having a home base, and we each have our own special place within the organization as a whole.

The information below is provided by sister Akshaya Raghu:

Sigma Sigma Rho was established on December 10, 1998, by ten young women seeking for an existence of a group that defined a sense of strength and unity amongst South Asian women.

The Greek letters, Sigma Sigma Rho were chosen for this organization because they substantially uphold its motives and goals, which are expressed as Sisterhood, Society and Remembrance.

Sisterhood is what we stand for and something that we value greatly withover 600 sisters throughout 16 established schools. We boast the ability to be large enough to network and establish connections all across the country, yet still be able to maintain personal relationships with the sisters nationally. Here are the basics of Sigma Sigma Rho:

Society is who we give to and how we give back. Between all of Sigma Sigma Rho’s chapters and colonies, we have raised thousands of dollars to give back to many charities not only in our locales but nationally to programs with help raise domestic violence awareness and prevention. These programs include:

Being a part of this sorority lets us break down stereotypes about women and gives us a platform to share our ideas and make an actual change.

Remembrance is what lies in our hearts. Over the past 15 years, Sigma Sigma Rho has grown to become a diverse and thriving sorority, however we are a South Asian interest based sorority, and we strive to always remember our roots by raising awareness to South Asian culture, values and traditions.

Sigma Sigma Rho is a sorority filled with strong, intelligent, well-rounded, and DISTINGUISHED women. Do you have what it takes? #RushSigSig #SigSigRho

Anya Rath is a senior at Michigan State University, pursuing a bachelors in journalism. She is a sister of the South Asian interest sorority Sigma Sigma Rho, and is the managing editor of her college newspaper, The State News. Follow her on Twitter for the latest happenings in her life.