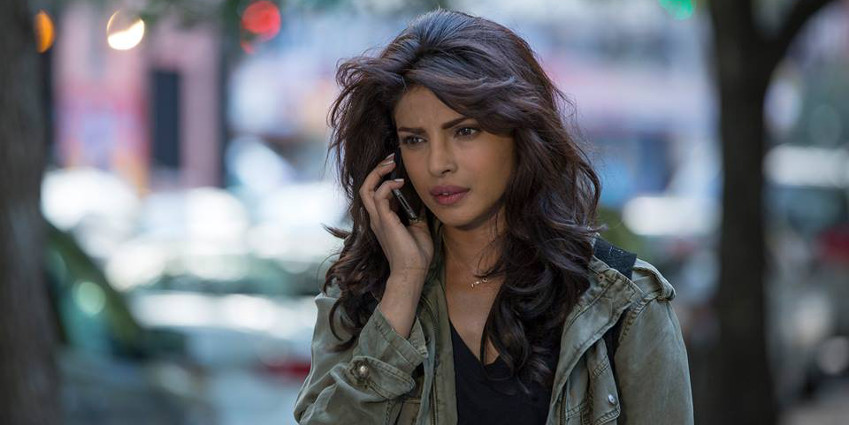 So, last night was the second episode of Quantico, a show with an already problematic setup with Priyanka Chopra playing the suspected terrorist, Alex Parrish. I’m really quite bothered by the fact that she doesn’t have a South Asian name. It seems as though she’s been so colonized that she doesn’t even connect with her own heritage anymore.

I mean, granted, many South Asian women connect with their culture to varying degrees, but for someone who was raised in Mumbai until she was old enough to come back and go to university, coupled with her appearance and the fact that she has a South Asian mother is the only South Asian qualities about her.

However, that was what you missed last week. This week, we continue with our time jump between the New Agent Trainees’ training at Quantico and the terrorist attack on Grand Central Station.

What is it with terrorists and super villains attacking New York City? You’d think people would just move out by now and just refer to NYC as “The Wasteland.”

But, I digress. Let’s get to the critique.

The race and gender distinctions, in spite of the show seeming to want to gloss over them, they are still quite obvious.

Shelby is the only white woman, and out of all of them, she is the only one to complain about all the hard work they have to do. This might not be because she has white privilege, but because she also has class privilege—she comes from money, in a way that the other women do not. The others have not complained once about how hard their work is—Nimah is the only other woman to protest about anything, and the subject of her disapproval is Simon, who seems insistent on being friends with Nimah (and Raina, though he doesn’t know that).

They’re given an exercise about thwarting terrorist attacks where they analyze three different scenes of terrorist plots. They have to figure out what the plot is, where they’ll strike and if they’re all legitimate, and which one is the most time-sensitive.

As it turns out, it was none of them—Alex is the only one who figures it out, and there were clues that Liam was the real threat because he’d left memorabilia of his favorite sports team in each scene, and even carried a team mug throughout the exercise. This is to teach them not to take evidence at face value to make sure that they can trust the source of their information and to trust their instincts.

In the future, Alex is still on the run and has encounters with Liam and Natalie, though she tries to convince them that it would have been stupid of her to plan an attack and then hang around afterwards.

Well, DUH, I could have told you that, and I’m not a trained federal agent. It’s the height of stupidity, or arrogance, to commit a crime and then make sure you’re found at the scene of the crime.

But this episode was only moderately better, in that we get to see some character development—even if it isn’t Alex’s character. But that’s the problem. She seems to have no intention of going through any character development. It’s like someone wrote 9/11 fanfiction and inserted Alex in as a Mary Sue.

For non-fanfiction readers, a Mary Sue is a female character inserted into the story who is basically perfect to the writer—there is no need to change her, stuff happens to her and she handles it perfectly. She not only solves the mystery of what the terror plot was in her exercise, she was also the only NAT in her class to figure out that the whole scenario was a set-up.

Miranda even comments later that Alex is the first student to ever solve this exercise, which was intended for the NATs to fail.

Also, you could give a plank of wood Chopra’s lines and you’d probably get more authentic emotion out of it. I’m not sure if she’s trying to portray a lot of emotions and failing, or if she’s trying not to show any emotions at all. Either way, her co-stars should be the main focus of the show, they are far more interesting than she is—especially Nimah, Raina, Miranda, Caleb and Simon. I’d much rather see where this show goes with these characters.

By the end of the episode, Liam releases Alex’s name and description to the media. To the show’s credit, Alex isn’t described as South Asian, but the description is still bad—“dark skin, brown eyes and brown hair”.

First of all, Chopra is not dark-skinned. Also,  dark skin could apply to anyone of color, so congratulations, “Quantico,” you’ve just made every woman of color a suspect in the eyes of the public.

Just a Note: In the real world, there would be a lot of women of color with dark eyes and hair being attacked in the streets after that announcement.

“Quantico” has some potential, it definitely passes the Bechdel test, the huge cast of women of color is awesome and some of the supporting characters are really interesting.

But where are the men of colour? Have you noticed? Caleb, Liam, Booth, the new analyst Elias and Simon? Yeah, they’re all white men! But of course, I guess we couldn’t have a Punjabi guy in a turban or a black guy in the group, then we might have to hear real stories of racial profiling and police harassment instead of glorifying the FBI and the police as if they’re beyond reproach.

And this is coming from someone who watches “Criminal Minds” and “Law and Order: SVU” constantly. Not to mention, if we have men of color, then we have to talk about how post-9/11 was a tragedy too, especially with all that racial profiling, police harassment, police brutality and torture in the name of “national security.”